On Everest, a trail of old and faulty oxygen equipment

The multimillion-dollar climbing industry has been only loosely regulated in Nepal. But now, as the spring season picks up in Nepal and Tibet, Nepal's government is starting to take action 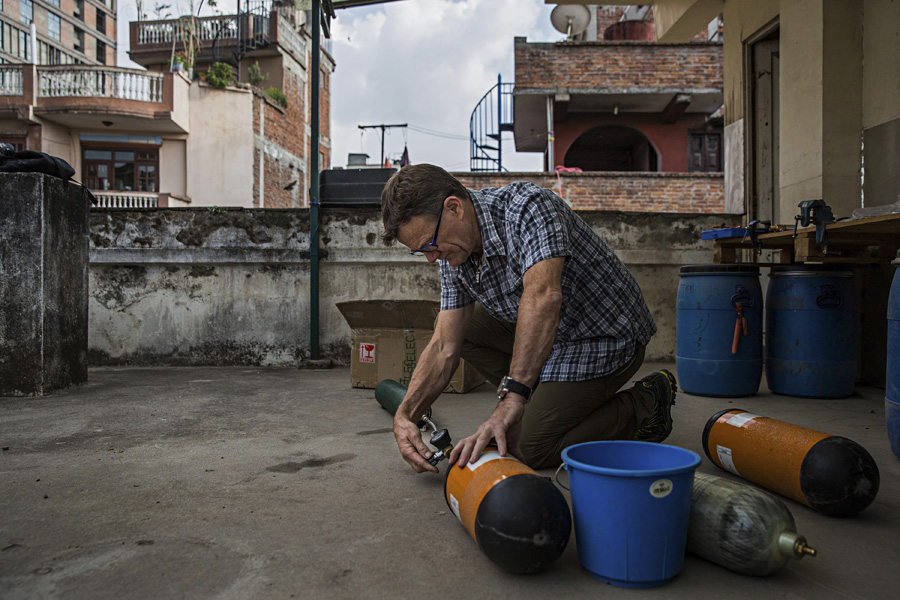 Ted Atkins, an engineer and mountaineer who created Top Out, a high altitude oxygen delivery system, fills an older oxygen cylinder for testing in Kathmandu, Nepal, May 2, 2018. Illicitly recycled gear has fueled profits for some expedition companies for years, but, after some harrowing failures, Nepal is taking action as Everest climbing season begins. (Lauren DeCicca/The New York Times)

KATHMANDU, Nepal — On a frozen lip of rock near the summit of Mount Everest, climber Adrian Ballinger watched as his teams’ oxygen regulators failed, one after another.

Several of them hissed, swiftly expelling oxygen from cylinders carried by the hundreds of climbers who scale the world’s highest mountain every year. Others shot plumes into the sky “like fireworks,” Ballinger said.

Panic spread among the 25 climbers. Of the group’s few dozen regulators, which sit atop cylinders and control the flow of oxygen, nine failed in less than an hour during their expedition last spring, he said.

“This was by far my most dangerous day on the mountain,” said Ballinger, who has been leading Everest expeditions for over a decade.

But the peril that Ballinger’s two teams faced near the top of Everest was not an isolated incident. According to interviews and public records from the past two decades, at least 21 others have reported dangerous equipment problems, many of them pegged to leaking oxygen cylinders, malfunctioning regulators or human error made by inexperienced climbers.

In interviews, guides, mountaineers and engineers said that efforts by some expedition organizers to maximize their profits had created an epidemic of old and substandard equipment being used on Everest. And they say the problem is drastically underreported.

The multimillion-dollar climbing industry has been only loosely regulated in Nepal. But now, as the spring season picks up in Nepal and Tibet, Nepal’s government is starting to take action.

Last month, officials announced a ban on cylinders older than 10 years, set standards for oxygen quality and said a group would be formed to inspect equipment.

“It’s a serious issue,” said Mira Acharya, a tourism ministry official, adding that army personnel might be deployed to base camp to monitor teams.

Without serious reform, a crisis is imminent, said Dawa Steven Sherpa, the managing director of Asian Trekking, one of Nepal’s oldest climbing companies.

“There is so much the market does not know about oxygen cylinders,” he said.

In the 1990s, a shift toward bigger commercial Everest expeditions was fueled in part by the introduction of affordable and lightweight cylinders from a single company: Poisk, a Russia-based supplier. Over the past 25 years, the company is estimated to have supplied more than 90 percent of high-altitude oxygen systems used in Nepal, said Igor Ashmarin, a Poisk spokesman.

Then, when Poisk introduced refillable cylinders, climbing guides began funneling used ones into a black market and cutting costs by bypassing the company for refilling and maintenance. Ashmarin said such misuse — along with the use of beat-up, expired cylinders — was the problem, rather than the gear’s design.

Robin Moore, an American physician, was near the top of Everest in 2017 when she started gasping for air. Guides said her equipment looked fine and Moore had oxygen, but she soon fell unconscious. A Sherpa changed the cylinder, and oxygen began flowing again, snapping her awake, she said.

In 2012, Ted Atkins, a British engineer who founded Topout, an oxygen systems company that offered one of the first competitive alternatives to Poisk, was screwing a Russian regulator onto a new European cylinder when it exploded in his face.

After the accident, Atkins found that problems with oxygen systems were more pervasive than widely thought. Ten percent of used Poisk cylinders he had tested were leaking through their valves, he estimated, a striking number considering that most climbers use several cylinders each for a summit attempt.

Meanwhile, regulators — which help climbers gauge their oxygen supply — were sometimes freezing, dispensing no oxygen or giving inaccurate readings. More recently, Atkins found that a smaller number of cylinders were losing oxygen through the body of the tank, visible when submerged in water as gas bubbling out.

“Every time you fill a cylinder, when you put the gas pressure in it, it expands,” he said in an interview with The New York Times last year. (Atkins died in an unrelated climbing accident in August.) “That expansion causes metal fatigue.” 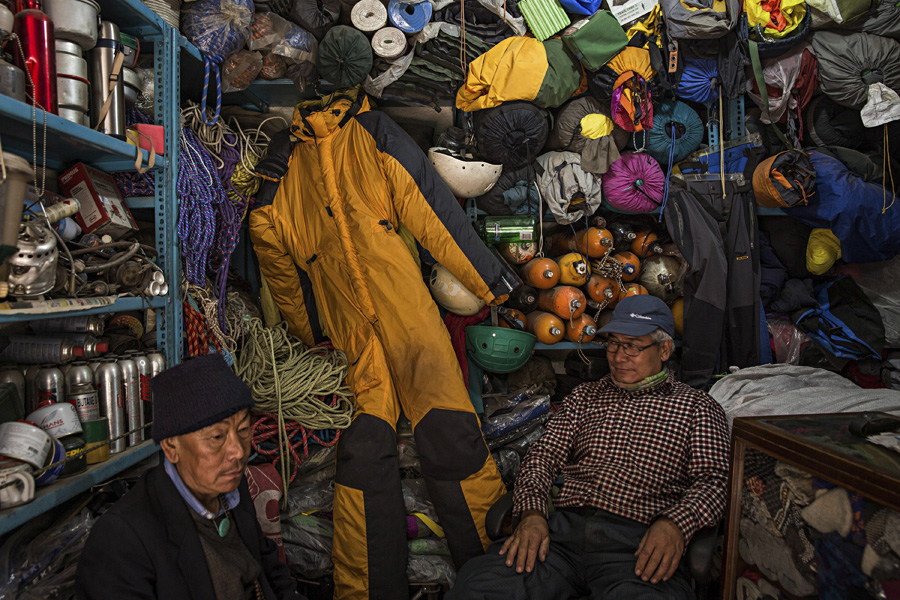 A mountaineering shop where older oxygen cylinders are sold and rented in Kathmandu, Nepal, May 5, 2018. Illicitly recycled gear has fueled profits for some expedition companies for years, but, after some harrowing failures, Nepal is taking action as Everest climbing season begins. (Lauren DeCicca/The New York Times)
Unlike newer cylinders, which are labeled with their expiration dates and rented out to ensure maintenance, older ones are often unmarked, making it difficult to discern their age.

Divas Amatya, the chief executive of S.D. Gases, a company that refills climbing cylinders in Kathmandu, said it was difficult to say how many deaths on the mountain might have been connected to equipment issues.

According to the Himalayan Database, a climbing archive, at least 14 mountaineers are thought to have died in the last decade from acute mountain sickness, one of the top killers on Everest, which can progress to brain swelling and fluid buildup in the lungs.

Others died from vague conditions like “exhaustion” or accidents that might be related to disorientation from hypoxia. Extra oxygen is an imperfect buffer against altitude sickness, but it lowers the risks considerably.

Nepal’s government has made little effort to investigate. Expedition organizers often leave dead climbers’ bodies — and their equipment — on the mountain, citing the challenges of retrieval.

Last spring, hundreds of climbers scaled Everest from two sides of the mountain in Nepal and Tibet, where the two teams led by Adrian Ballinger were thrust into exceptional danger.

As their regulators failed on May 16, Ballinger scrambled to bring climbers down safely. Sherpa guides passed oxygen masks back and forth or went without them. Backup regulators were exhausted.

At a lower altitude, four more regulators gave out. “This is the first time I’ve seen this,” Ballinger said, adding that the British company that manufactured the equipment, Summit Oxygen, had a good reputation.

At least two other expeditions reported similar failures in Tibet. Around the same time, more failures were reported in Nepal.

The broadcaster Ben Fogle had nearly reached Everest’s summit when two regulators from Summit Oxygen seemed to explode after they were attached to the group’s Poisk cylinders. A Sherpa and the expedition leader gave Fogle their equipment and averted a crisis.

In an interview, Neil Greenwood, the managing director of Summit Oxygen, attributed the failures to high humidity on the mountain and “minuscule leaks” affecting the regulators.

He said the problems had occurred over a short window of time and in several cases were exacerbated by climbers’ mishandling equipment.

“There was a genuine issue,” he said. “We’ve put a solution in place. We’ve issued a product recall notice. It won’t happen again.” He has recently held training sessions to teach climbers how to use the equipment.

Before his climb on Everest, Fogle had prepared himself for avalanches, earthquakes and crevasses. But the safety of oxygen systems was far from his mind, he said.

“Rather naïvely,” he said, “I assumed the one thing that we humans can do very, very well is make equipment that doesn’t fail.”

Tweets by @forbes_india
Can Virat Kohli propel the Mobile Premier League?
Why is Generation Z so depressed: Overprotective parents