Paris is getting a new museum. Here's a sneak peek. 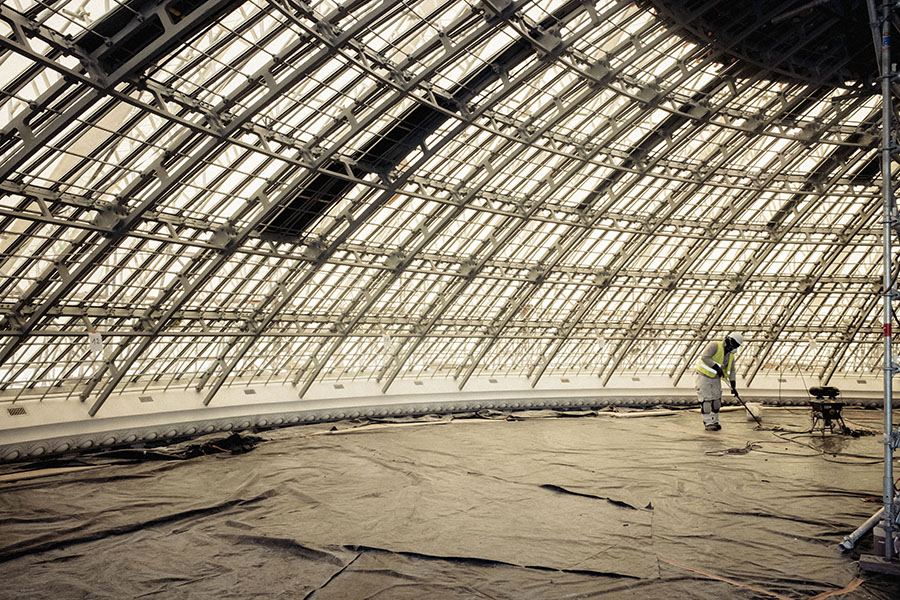 The dome of the Bourse de Commerce, a 130-year-old exchange building that is being converted into a museum to house French billionaire François Pinault's collection of contemporary art, in Paris, April 11, 2019. Pinault is financing the $170 million renovation himself during a time when private funding for contemporary art is increasingly important. (Julien Mignot/The New York Times).

PARIS — Early next year, after a nearly $170 million redevelopment, Paris’ 130-year-old Bourse de Commerce will reopen as a contemporary art museum. Unlike the world-famous state-funded museums nearby against which it hopes to measure up — namely, the Louvre and the Pompidou Center — this one will be financed by one man: French billionaire François Pinault, whose collection consists of about 5,000 works by artists such as Jeff Koons, Cy Twombly and Cindy Sherman.

Pinault, 82, is the founder of the company that eventually became the Kering luxury-goods group. His family holding company also controls the auction house Christie’s, among several other assets. He already has two exhibition venues in Venice. Now he’s transforming the Bourse — a circular exchange building where wheat, sugar and other commodities were once traded — into the latest and most conspicuous vitrine for his collection.

It will be Paris’ second billionaire-funded art space after the Fondation Louis Vuitton, which was inaugurated in 2014 by Bernard Arnault, chairman and chief executive of the rival luxury-goods group LVMH Moët Hennessy Louis Vuitton. (The two tycoons recently made headlines when Arnault’s family pledged 200 million euros, or about $224 million, and Pinault’s committed 100 million euros toward the rebuilding of Notre Dame de Paris after the fire at the cathedral.)

In a country where museums are basically offshoots of central government and where private sponsorship of culture was long considered self-interested and suspect, the opening of the two art spaces signals a cultural shift. As France’s museums face austerity-driven cutbacks and struggle to satisfy a public thirst for contemporary art, private money is becoming increasingly important.

In a recent interview after he toured the Bourse construction site, Pinault boldly positioned his future space among Paris’s leading cultural landmarks. “Near here, there’s a great museum, the Louvre, which I’m not going to try to imitate: That would be pretentious,” he said. “And not far away, there’s the Pompidou Center, a great museum of the 20th century.” “What I would like is for the Bourse de Commerce to be a place to show the art of today,” he added. 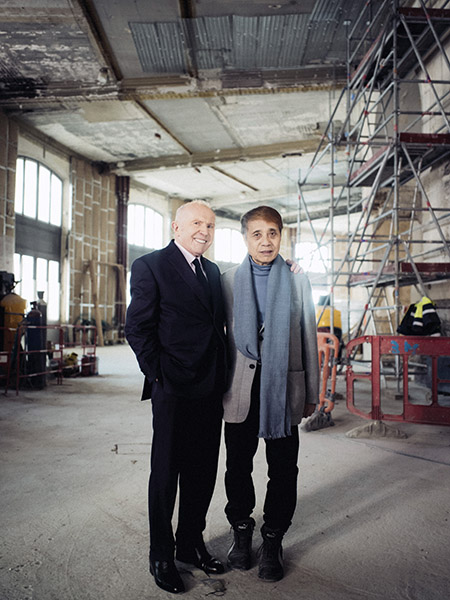 French billionaire François Pinault, left, the founder of the company that eventually became the Kering luxury-goods group, with Pritzker Prize-winning architect Tadao Ando, who has been hired to lead the transformation of the 130-year-old Bourse de Commerce building into a museum to house Pinault's collection of contemporary art, in Paris, April 11, 2019. As France’s museums face austerity-driven cutbacks and struggle to satisfy a public thirst for contemporary art, private money is becoming increasingly important. (Julien Mignot/The New York Times)

Pinault said that the Bourse “could be an interesting complement to existing institutions,” because French museums had slow decision-making processes that made it hard for them to buy contemporary art: Prices can quickly inflate while curators and administrators debate acquisitions. “Only a madman like me can decide to buy them fast,” he said.

From afar, the iron-domed Bourse — set in the onetime market quarter of Les Halles — looks like just another 19th-century Paris edifice. But inside, the listed building (inaugurated in 1889, the same year as the Eiffel Tower) is unexpectedly monumental, with a vast rotunda and a high cupola that recall the Pantheon in Rome.

The Pritzker Prize-winning architect hired to lead the transformation, Tadao Ando of Japan, said in an interview that he wished to preserve that Pantheon-like feel because he was a long-standing admirer of the nearly 2,000-year-old Roman monument, with its high dome and central opening that let in the sun and the rain and made the visitor feel one with nature.

Rather than carve up the rotunda into multiple spaces, Ando has placed a 30-foot-high concrete cylinder inside it to be the Bourse’s main exhibition gallery. Immediately above the cylinder will be a promenade from which visitors will be able to gaze at the dome and at the 19th-century wraparound wall painting beneath, produced by five artists and representing trade between the continents. The museum’s half-dozen other galleries will be located next to the rotunda and on the first and second floors of the Bourse building. A basement auditorium is also being installed.

Pierre-Antoine Gatier, a state-appointed architect in chief who oversees works on national monuments, said that Ando was “respectful” of the existing building and that the Japanese architect did not wish his contemporary intervention to be “visible from the outside.”

Ando said he felt “a sense of anxiety” as an architect because of the building’s proximity to other great museums. “Paris is a center of world culture, so when you’re in the heart of Paris, you have to live up to the task,” he said. “This is no ordinary architecture project. It’s much more than that.” 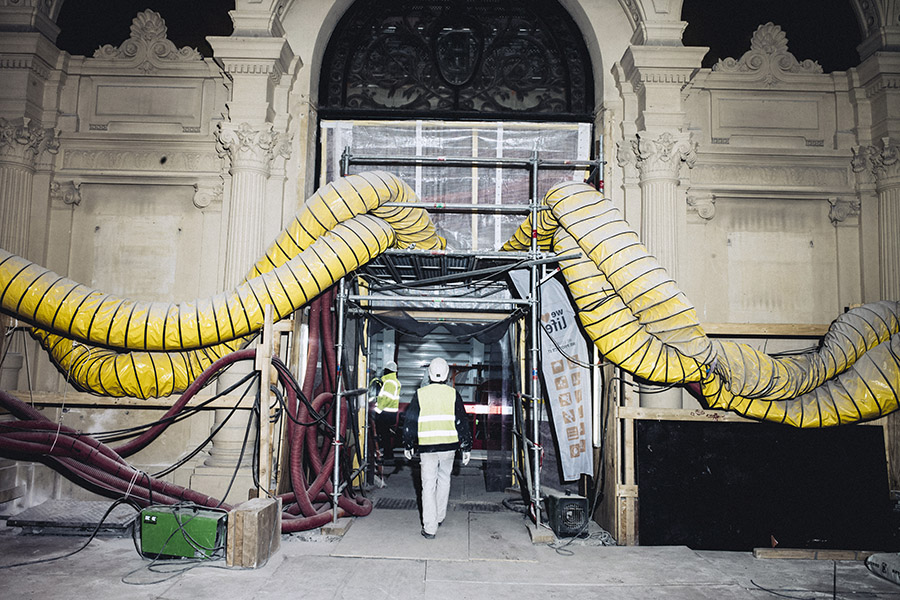 The 19th-century edifice of the Bourse de Commerce, a circular exchange building that is being redeveloped as a contemporary art museum, in Paris, April 11, 2019. The Pritzker Prize-winning architect hired to lead the transformation, Tadao Ando of Japan, made sure his work would not alter the exterior of the building. (Julien Mignot/The New York Times).

The opening of the Bourse de Commerce will be the culmination of a 20-year saga that began when Pinault announced he was opening a museum on an island in the Paris suburb of Boulogne-Billancourt, on the site of a former Renault car factory. He hired Ando to design it, but, blaming local government delays and a lack of surrounding infrastructure, he gave up just as construction was about to start. (Ando said that decision had been “very disappointing.”)

Pinault turned to Venice, where he took over the 18th-century Palazzo Grassi, and, later, the city’s former customs building, which was subtly transformed by Ando. The Venice venues have hosted a series of exhibitions rooted in Pinault’s collection: group shows; solo shows of artists such as Sigmar Polke and Albert Oehlen; and, in 2017, a sprawling, dual-site Damien Hirst exhibition, “Treasures from the Wreck of the Unbelievable.”

Arnault — who is often portrayed as Pinault’s archrival, particularly when the two were battling over control of the Gucci fashion house — hired another Pritzker Prize-winning architect, Frank Gehry, to design the Fondation Louis Vuitton in western Paris. That steel-and-glass structure draws more than 1 million visitors a year with exhibitions of modern and contemporary art, including displays of the Fondation’s own collection.

By the time the Fondation Louis Vuitton opened in 2014, Pinault was actively looking for a space in Paris. In 2016, the mayor of Paris, Anne Hidalgo, offered him a 50-year lease on the Bourse de Commerce for a lump sum of 15 million euros, plus yearly fees.

Asked if displaying his own collection in a museum in central Paris indicated an oversize ego, Pinault said that he had an ego “just like everybody else” but that he never forgot his “humble origins” as a timber merchant from Brittany, northwestern France. He recalled that when he was a child, his grandmother told him to keep his ego in check, otherwise it would “grow like a man’s beard.”

The Bourse will stage around 10 shows a year, involving works from Pinault’s collection as well as loans, according to Jean-Jacques Aillagon, the billionaire’s culturaladviser and a former French culture minister. In late 2020, the Bourse and the Pompidou will team up for a dual-venue exhibition of a male artist whom Pinault described as world-famous but declined to name.

Referring to that plan, Aillagon said, “Public institutions no longer have this absolute mistrust of private ones.”

Pinault dismissed comparisons with the Fondation Louis Vuitton, saying that that building was mainly a venue for large loan exhibitions. As for Arnault himself, Pinault said that he was not a “rival,” but a “business competitor, which is not the same thing.”

“There’s no competition between us when it comes to art,” he added. “No knives drawn!”