Saudi Arabia wants your next vacation

Billions of dollars are being poured into vast tourism projects throughout the kingdom, from flashy resorts to new airports, in a bid to shift the economy away from its dependence on the petroleum industry 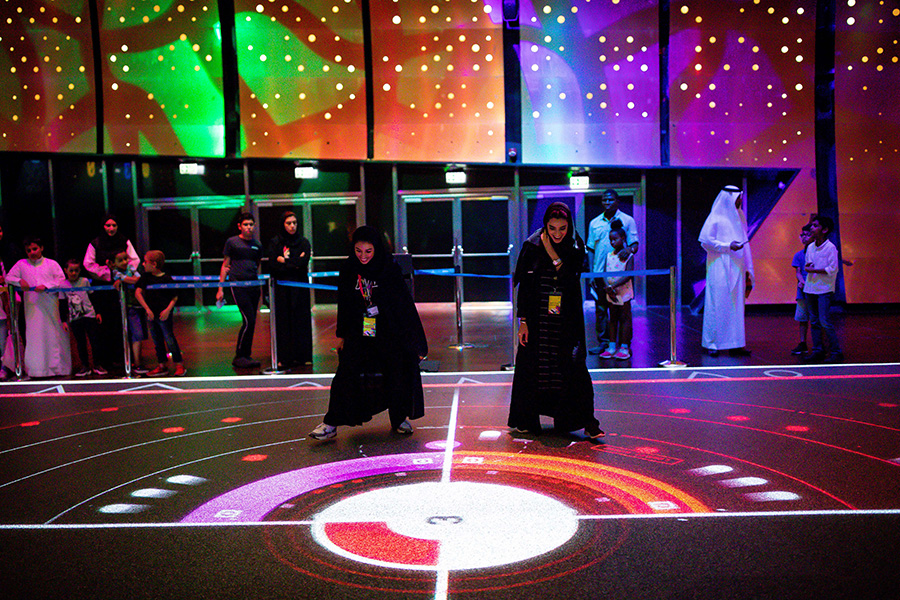 AL-UYAYNAH, Saudi Arabia — In a makeshift camp under a starry sky, Ghazi Al-Anazi talked about his experience in the fledgling Saudi tourist business. A decade ago, barely in his 20s, he started taking British business associates of his brother to see the wind-carved hills of the Saudi desert.

Now 31, he has a small fleet of SUVs, nearly a dozen employees and a self-taught ability to cater to the whims of visitors from many nations.

“I know what they want to do, and what I need to do about it,” he said, ladling out a dinner of barbecued chicken and Middle Eastern salads to a couple of dozen tourists from France, Ukraine, Malaysia and the United States.

Al-Anazi and his business, Ghazi Tours, take up to 900 visitors a month on treks like this one to a dry riverbed dotted with venerable acacia trees north of Riyadh, the Saudi capital.

But he is confident those numbers are about to multiply, as Saudi Arabia begins to open itself up as a major tourist destination. The government recently began issuing tourist visas for the first time, a remarkable shift for a traditionally shuttered society.

And it goes far beyond that: Billions of dollars are being poured into vast tourism projects throughout the kingdom, from flashy resorts to new airports, in a bid to shift the economy away from its dependence on the petroleum industry and the government jobs it finances.

Visiting Saudi Arabia has long been a difficult proposition for everyone except Muslim pilgrims going on the hajj and business travelers. For decades, historic sites have been largely ignored, and hotels and travel services were scarce outside major cities.

Unemployment among Saudi nationals is stubbornly high, about 12%. But the government figures that the travel industry, which employs about 600,000 people, can be expanded to create up to 1 million more jobs, as the need for everything from drivers, chefs and guides to hotel managers and archaeologists expands.

The move toward tourism was devised by Crown Prince Mohammed bin Salman, the kingdom’s 34-year-old chief policymaker, whose Vision 2030 program seeks to diversify the economy, draw in more outside investment and expand the private sector. 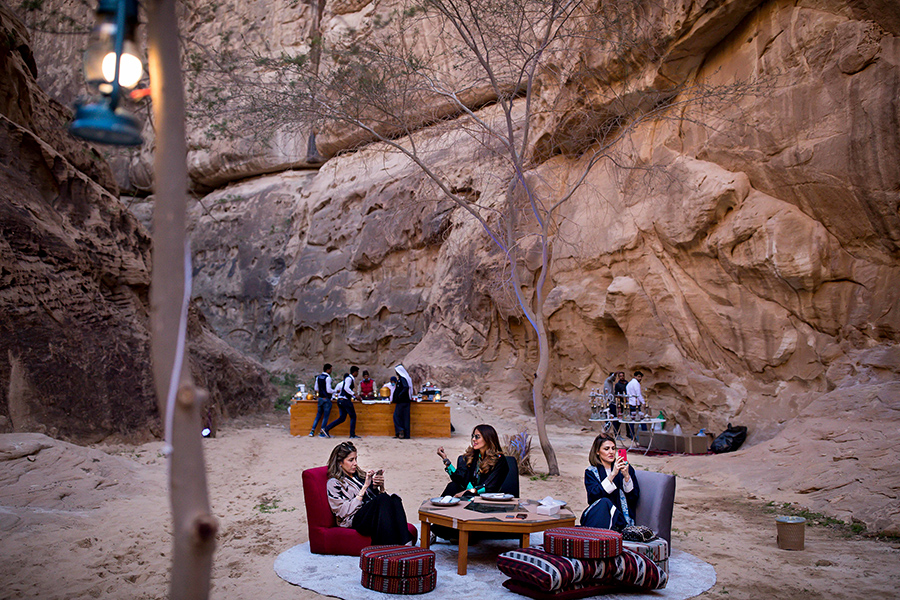 Tourists in Al-Ula, Saudi Arabia, which includes ruins of an ancient city of carved rock tombs, Oct. 29, 2019. The oil-rich kingdom is betting on tourism to broaden its economy, but will visitors come? (Tasneem Alsultan/The New York Times)

The Saudis are hiring international real estate executives and introducing elaborate advertising campaigns to try to put themselves on the map. Already, there are signs the push is paying off: Saudi hotel room sales in the first nine months of 2019 increased 11.8% from the same period last year.

But a question hanging over the whole initiative, some travel experts say, is how many people will want to visit an ultraconservative kingdom that’s the subject of intense criticism over its treatment of dissenters and women, that restricts the use of alcohol and until recently barred unmarried couples from sharing rooms.

An effort to overcome those concerns by inviting social media influencers for expense-paid trips this year prompted a backlash by online commenters.

Saudi Arabia is promoting a different image: ultramodern resorts, ruins from ancient civilizations and romantic desert landscapes once crossed by Lawrence of Arabia. And tour guides will not object if you want to take a selfie with a camel.

Referring to the vast golden vistas, “I call it the new yellow oil,” said Amr Al Madani, the chief executive of the Royal Commission for Al-Ula, a region in the northwest part of the kingdom that is roughly the size of New Jersey.

Al-Ula includes the evocative ruins of an ancient city of carved rock tombs, called Mada’in Saleh. Like Petra, a popular tourist draw in southern Jordan, the city was built by the Nabataeans about 2,000 years ago.

The vast region has only 45,000 residents. There are some existing resorts, and France’s Accor chain recently agreed to manage one. Madani is planning an investment of up to $20 billion, from a mix of public and private sources, to finance airport expansion, hotels and other facilities to accommodate up to 2 million visitors drawn to archaeological sites as well as food and cultural attractions.

An even more ambitious scheme is under construction on Saudi Arabia’s western coast. The Red Sea project covers a remote area with 120 miles of coastline, more than 90 islands and extensive coral reefs that could one day be a diving and snorkeling paradise.

The Saudis want to put four dozen luxury hotels there, including 14 in a first phase, forecasting that these facilities will eventually contribute around $6 billion a year to the economy. Accor has agreed to participate, and the developers say they are in talks with other international hotel groups.

The Public Investment Fund, the crown prince’s $320 billion vehicle for economic makeover, owns the Red Sea scheme and is providing some of the initial capital. Proceeds from the recent sale of a stake in the national oil company, Saudi Aramco, are likely to flow into the investment fund, and could finance other tourist projects. 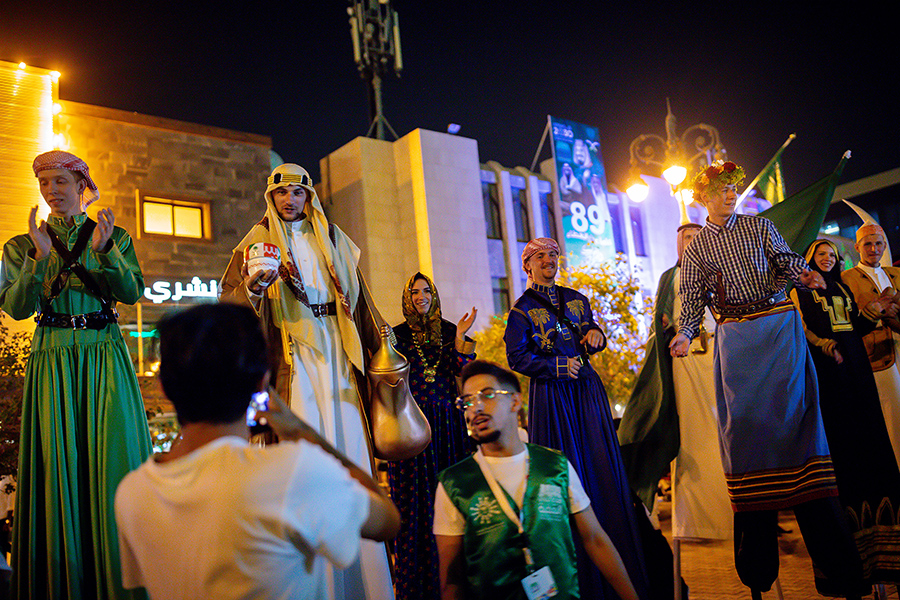 Saudi National day celebrations in the streets of Riyadh, Saudi Arabia, on Oct. 29, 2019. The oil-rich kingdom is betting on tourism to broaden its economy, but will visitors come? (Tasneem Alsultan/The New York Times)

On one occasion, the prince told the developers to think again about putting a resort on a certain island because the water surrounding it is not turquoise enough.

These projects are the size of small countries, and the prince is taking advantage of their scale and sparse populations to plan distinctive communities. The Red Sea development, for instance, will not be connected to the national electric grid and will rely completely on renewable energy like wind and solar, according to Pagano, who is a Canadian citizen.

Saudi Arabia’s conservative social mores will also be less in evidence, the developers say. The travel industry anticipates that alcoholic beverages, which are prohibited in Saudi Arabia, may eventually be sold in these new areas just as they are in Dubai, the Persian Gulf travel and business hub, whose mix of luxury and modernism appears to influence the crown prince’s thinking.

Pagano said he was not counting on the availability of alcohol. He did say that “what you typically see in the West” is likely to be permitted at Red Sea resorts. In other words, alcohol aside, travelers will be able to do as they please — for example, women will be able to sunbathe in bikinis.

Both the Red Sea and Al-Ula projects aspire to attract wealthy, ecology-minded tourists willing to pay a premium for a novel and relatively unspoiled destination. Some travel analysts say this approach may pay dividends.

“This planet is running out of places to go,” said Philip Wooller, Middle East director for the travel research firm STR.

Aman Resorts, a Swiss-based hotel group that caters to the wealthy and celebrities, is setting up three establishments in Al-Ula, with a plan to open in 2023. “There is a huge amount of culture to be discovered and explored, and that is exactly what our guests want to do,” said Anna Nash, a spokeswoman for the company.

Still, Wooller said, the Saudis are starting “at the very very beginning.” Although the kingdom accommodates about 15 million international visitors a year, the bulk of them for Muslim pilgrimages, tourism has largely been limited to side trips after business meetings. A huge training and hotel-building exercise is going to be required to meet the government’s goal of 100 million domestic and international visits by 2030, more than double the 41 million of 2018. 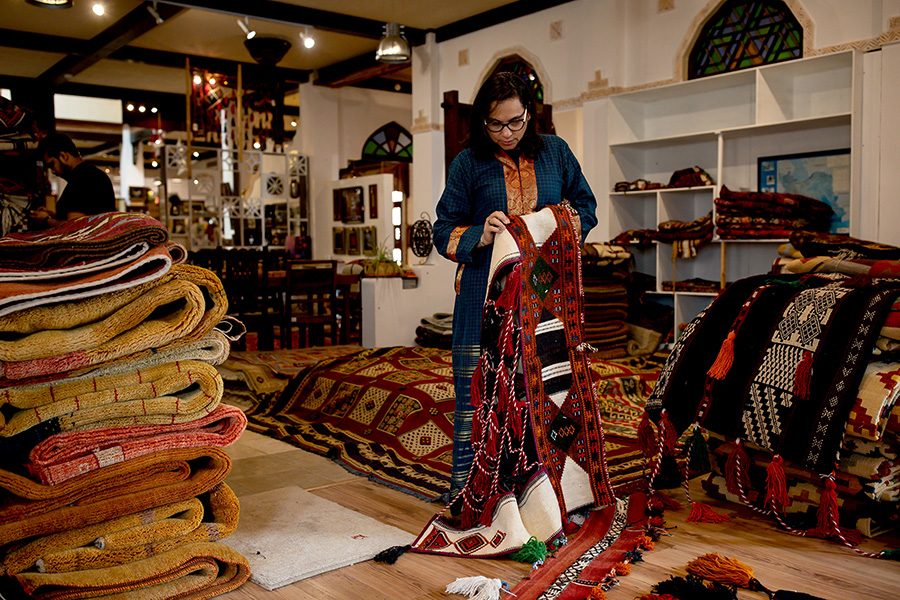 That is a big leap in a kingdom that until recently has had little tourism. “If we had to live off tourists, we would be dead,” said Qamar Ahmed, who runs a combined antique store, art gallery and coffee shop called Desert Designs in Al-Khobar in eastern Saudi Arabia.

Moreover, while the crown prince has given a green light to some changes, including allowing women to drive, some potential visitors may be alienated by the brutal killing of journalist Jamal Khashoggi in 2018 by Saudi agents, and other repressive measures like jailing critics of the government.

“Saudi Arabia won’t be an easy sell for a lot of tourists,” said Henry Harteveldt, a travel consultant at Atmosphere Research in San Francisco.

While Saudi Arabia might appeal to travelers who consider themselves explorers, he said, the kingdom has a “big cloud hanging over” its reputation because of the Khashoggi killing and because women are not treated as fully equal to men.

Still, the Saudis are trying hard to buff up their image. Arriving in Riyadh for business meetings, Carl de Stefanis, a New York venture capitalist, and his son, Erik, visited a welcome kiosk at the airport and were surprised to be treated to a tour of the city, a tasty dinner, and gifts including white Saudi robes and checkered head cloths.

“Just about everyone we met cared earnestly that we were enjoying ourselves,” de Stefanis said.

And for Saudi tourism entrepreneurs, it seems like a new day. For instance, Madawi Bander Al Saud says her company, The Traveling Panther, is preparing customized tours of the kingdom for clients from Japan, Mexico and Italy.

“For years we have been showing them pictures,” she said. “Now they get to come.”

Tweets by @forbes_india
Is a 63-year-old seaplane with an electric engine the future of air travel?
Meet the Box Office Badshah you didn't know: Sajid Nadiadwala