Short on cash, businesses in China rely on IOUs

Beijing needs private businesses to provide paychecks and rekindle growth. Instead, more than $200 billion in IOUs are floating around the Chinese financial system, according to government data 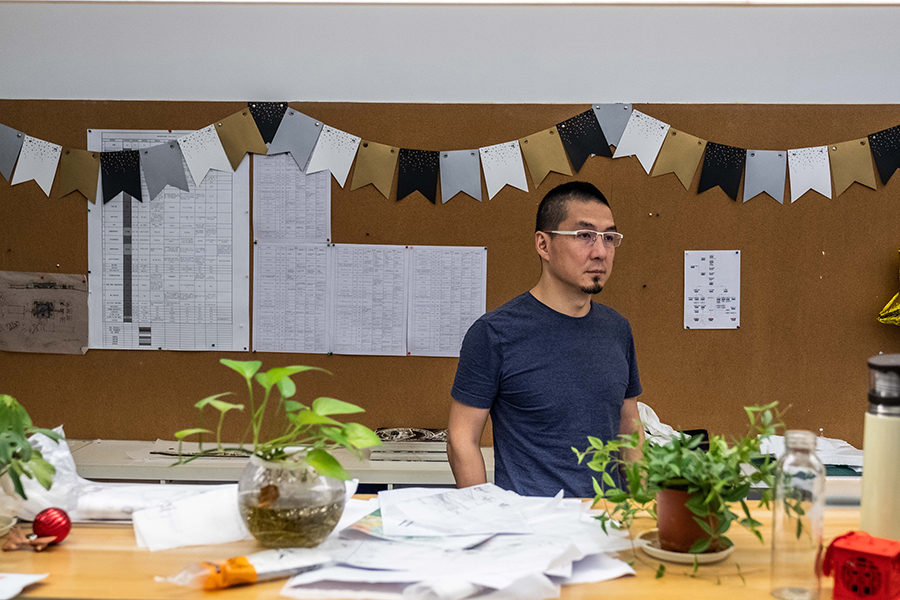 Zhang Zhiyang at his architecture firm in Shenzhen, China, Aug. 1, 2019. Zhiyang is now accepting the financial equivalent of i.o.u.s from as many as one-third of his clients instead of cash. As the trade war escalates, Beijing needs private companies to pull China’s economy out of its rut, but for some, ready money can be hard to find. (Lam Yik Fei/The New York Times)

SHENZHEN, China — China was on the cusp of the biggest building boom the world had ever seen when Zhang Zhiyang started his architecture firm. It was 2007, and the money rushed in for contracts to design residential complexes and an exhibition hall.

These days, with China’s economy slowing and his own business dropping off, Zhang can’t seem to get paid on time. He is now accepting the financial equivalent of IOUs from as many as one-third of his clients instead of cash.

“It wasn’t like this before,” he said. But, he added, “it’s better than nothing.”

China’s trade war with the United States has escalated in recent days, posing a growing threat to an already slowing economy. Beijing needs private businesses like Zhang’s and his clients to help rekindle growth and provide paychecks to Chinese workers.

But many of those private businesses are short of cash. Instead, more than $200 billion in IOUs — known in the dry world of finance as commercial acceptance bills — are floating around the Chinese financial system, according to government data.

China is not running out of money. But Chinese banks are reluctant to lend to private businesses because they consider big, state-owned enterprises more reliable in paying off their debts. Alternative sources of money have dried up as regulators have cracked down in recent years on China’s shadowy world of unofficial lending.

So a growing number of companies are issuing IOUs to their suppliers. Some suppliers turn around and use the notes to pay another supplier. And then — in a sign of how desperate some Chinese companies have become for money — they sell the notes for less cash than they are worth.

Recent Chinese history suggests these financial dealings could end badly. Two decades ago, when the Chinese economy was growing too fast for regulators to handle, so many IOUs were passed around by state-owned enterprises — an estimated $86 billion in today’s money, then totaling nearly one-fifth of China’s economic output — that the Chinese business world seized up. The government had to intervene, restructuring the debt and writing much of it off.

“You had companies holding stacks of paper,” said Dinny McMahon, an author and research fellow at the Paulson Institute in Chicago.

“The fact that these things are proliferating again at a time of entrenched economic downturn should be a signal of the degree of distress that companies are finding themselves in,” McMahon said.

Commercial acceptance bills are not legal tender. Rather, they are pieces of paper promising payment in the future. Companies owed some $211 billion in these informal notes as of February, the most recent government data available, an increase of more than one-third from the previous year.

More debt may be floating around China’s corporate world and goes untracked if the notes are being traded for less than their face value. A market has formed around commercial acceptance bills, in which companies buy and sell them based on the prospects for being paid back. The bigger and better known the company, the more secure the bill is considered.

A pillar of China’s economy, the property sector, is feeling the squeeze particularly hard. Sales have been slowing since late 2017, making it hard to pay for new projects. At the same time, the government is clamping down on other ways that property companies raise money, like through the shadow banking system.

Property companies have adapted by effectively turning the commercial acceptance bills into a currency, according to interviews and filings from dozens of property developers and suppliers like steel companies, design and construction firms.

Xu Jiang of Zhubo Design, an architecture and urban planning company in the southern city of Shenzhen, said customers had started to pay with commercial acceptance bills two years ago. The customers, which include some of the country’s biggest developers, local governments and state-owned firms, now use these notes more frequently than paying cash, he said.

“When developers first started to pay me with commercial acceptance bills, I found it difficult to accept,” said Xu, Zhubo’s chief operating officer. “I didn’t know who would pay me and the debt is still on me.”

“But if I didn’t accept it, I couldn’t get the money,” he said of his clients. “We suppliers were forced to become part of their financial chain.”

Bigger companies like Zhubo say they can deal with the cash shortage for now. They can negotiate to get interest on top of the amount due. They can sell IOUs to investors for less than face value.

For smaller companies, Xu said, it is much harder to wait for months before being paid. Many property companies have not survived the shift. Through July, 281 had declared bankruptcy this year, according to court filings. About 200 declared bankruptcy over the same period last year.

Today, one of the biggest issuers of IOUs is China’s largest and best known property company, Evergrande. By the end of last year it had issued nearly $20 billion worth of IOUs to its suppliers. With a towering $100 billion debt pile and a penchant for raising bonds to pay off the interest, it appears to have turned to commercial acceptance bills to help cover costs.

“Commercial acceptance bills are only a tiny part of the whole payment,” said Chen Zhaohua, a spokesman for Evergrande. He added that it was a form of payment “agreed by both parties of a transaction.”

Bauing Construction Holding Group, a big supplier of design and materials to China’s biggest property developers, has disclosed that it is owed $96.4 million in these IOUs from Evergrande. It also recently disclosed a long list of other companies that owe it money in the form of similar notes. Gao Sheng, a spokesman for Bauing, declined to comment.

Another company that owes Bauing money is the state-owned firm China State Construction Engineering. China State said it had owed $490 million in IOUs to all of its suppliers at the end of last year.

Another major property developer, Greenland Holding, which was founded by the Shanghai government and has property developments in dozens of cities across China, had $550 million worth of unpaid notes out to suppliers by the end of last year, according to its annual report. The company said that was 10 times the amount it had outstanding in 2017.

Greenland did not respond to a request for comment.

One state-owned conglomerate, China Resources, which is involved in everything from construction to health care, has doubled its issuance of IOUs, with $2.7 billion in slips of paper unpaid at the end of last year. The company did not respond to a request for comment.

The boom is worrying some regulators. At least one property developer and five suppliers to property developers have received inquiries from exchanges where their stocks are publicly listed, raising concern over the sudden increase in these commercial acceptances, according to corporate filings.

In response to one such inquiry, RiseSun Real Estate Development, a large developer that has come into trouble overseas over its plans, disclosed that it had increased the use of commercial acceptance notes and bankers acceptances, a similar note but backed by banks, by more than 13 times. At the time it owed $460 million of commercial acceptances to its partners and suppliers.

Xue Ze, a spokeswoman for RiseSun, declined to comment.

Smaller business owners like Zhang, the architect, know the gut punch feeling that comes when companies do not make good on their commercial acceptances. Zhang recently took an unpaid IOU to the developer’s bank.

“We were told by the bank that the company had moved its money out,” he said.

Tweets by @forbesindia
Video: The history of Jammu & Kashmir, in two minutes
How not to kill your innovation: Avoiding 3 pitfalls of new product development