Tesla, facing setbacks and skeptics, tries to get back on course

Tesla says it has made design and manufacturing improvements in recent months to significantly address quality concerns, but the company and its chief executive, Elon Musk, are contending with some more fundamental blemishes 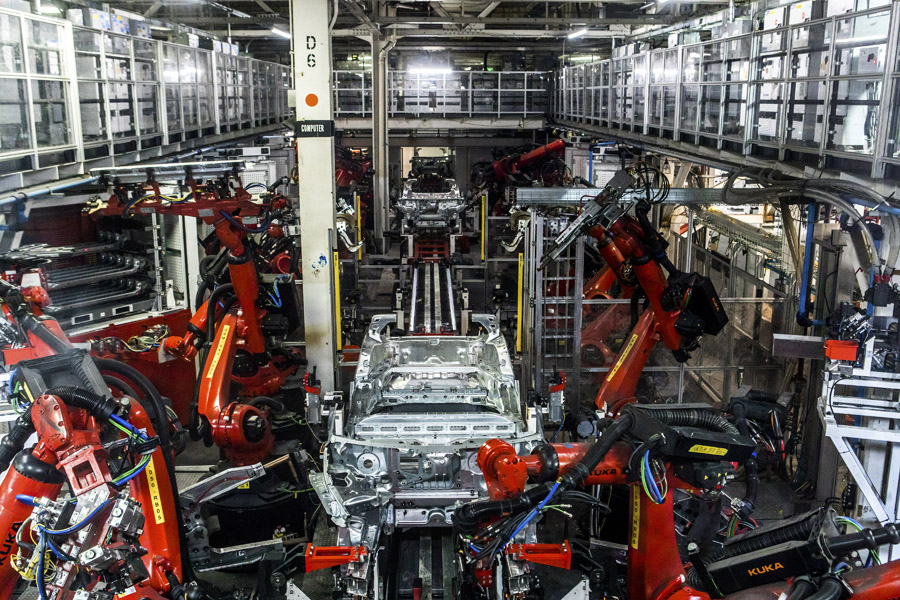 A big part of the Tesla factory is made up of large robot arms in Fremont, Calif., June 14, 2018. The owner of a shop that touches up new vehicles said that “sometimes there are issues from the factory.” Elon Musk’s electric-car company began the year with high expectations. But it has confronted a series of problems and a loss of investor confidence. (Christie Hemm Klok/The New York Times)

Tesla’s Model 3 electric sedan was heralded this year by Consumer Reports as the most satisfying car on the market. Then owners started to complain that cars had arrived with cracked windows, leaks or unreliable video screens. In some places, Tesla turned to outside body shops to repair scratches and other paint defects before cars were delivered to customers.

In Rocklin, California, near Sacramento, Kniesel’s Collision has a steady business touching up unsold cars for the nearby Tesla delivery center.

“Sometimes transport damages the paint,” said Justin Kniesel, the chain’s director of operations. “Sometimes there are issues from the factory.”

Tesla says it has made design and manufacturing improvements in recent months that have significantly reduced quality problems. But the company and its chief executive, Elon Musk, are contending with some more fundamental blemishes.

Demand for the Model S luxury sedan and Model X SUV is so sluggish that the automaker recently cut prices to lure buyers. New questions have arisen about Tesla’s self-driving technology. And some of the company’s staunchest backers have turned bearish. In the first three months of the year, the investment firm T. Rowe Price, once one of its biggest shareholders, sold off 80% of its shares in the company, according to regulatory filings.

By the start of last week, Tesla’s stock was at a three-year low. It rallied after reports in two online publications lifted hopes for a sales rebound in the second quarter, a prospect that Musk cited in an email to employees in May. Even so, the shares are down more than 40% in the last six months, wiping out almost $30 billion in value.

One sign of Wall Street’s ebbing confidence came from Adam Jonas, a Morgan Stanley analyst who long held high expectations for Tesla as an investment. In a recent report, he set his target price for the stock — currently trading around $200 a share — at $230, and said it could go to $391 if the company achieved robust sales in China and advances in self-driving technology and ride services. But he also warned that the share price could fall to $10 if Tesla’s strategies did not pan out.

Rather than a fast-growing tech company, he told clients in a conference call, Tesla now looks like a “distressed credit and restructuring story.”

Tesla remains a force in the industry. The Model 3, on the market only about a year, is the top-selling midsize luxury car, outpacing popular gas-powered models like the BMW 3 Series and Mercedes-Benz C-Class. Audi, Mercedes and Jaguar have produced electric models, but none have matched Tesla’s in battery range.

And as the year began, the company’s toughest problems seemed to be in the past. After initial production troubles with the Model 3, its assembly line in Fremont, California, was churning out the new sedan, and customers were flocking to its stores. It reported profits for both the third and fourth quarters of 2018. Musk felt confident enough to predict the company would remain profitable “every quarter going forward.”

But its business has gotten off track. On Jan. 1, the federal tax credit available to Tesla customers fell to $3,750 from $7,500. That effectively increased the cost of its cars and caused sales to slow in the United States. Sales of the Model 3 in Europe and China got off to a bumpy start. After laying off 7% of its workforce, Tesla reported a first-quarter loss of $702 million. The company expects to lose money again in the second quarter.

The recent concerns go beyond Tesla’s bottom line. Its Autopilot driver-assistance system has come under renewed scrutiny after a Model 3 hit a tractor-trailer in Florida, killing the driver. Autopilot was operating, and neither it nor the driver activated the brakes. Tesla has acknowledged that Autopilot cannot recognize all objects and may not brake for stationary vehicles.

Still, the company said the system significantly reduced the likelihood of crashes. In the first quarter of the year, Tesla drivers using Autopilot had one accident for every 2.87 million miles driven, the company said, while data from federal safety regulators shows that the national average for all vehicles is one every 436,000 miles.

In a May review of the latest version of Autopilot, which can navigate to a specific destination and change lanes without prompting by a human driver, Consumer Reports found that the system operated erratically and sometimes cut off other cars.

“It was like a first-time driver that was nearsighted,” said Jake Fisher, the magazine’s director of auto testing. Consumer Reports had earlier removed its “recommended” rating from the Model 3, citing “declining reliability.”

And then there are the sales figures. Tesla delivered 62,000 cars in the first three months of the year, a 31% drop from the fourth quarter. This quarter, Tesla’s sales have been helped by the arrival of an entry-level Model 3 priced at $35,000 — an offering that Musk long said would turn Tesla into a mainstream automaker. But the company recently added $400 to the base model’s price and made it available only to customers ordering by phone or in person. It cannot be ordered on Tesla’s website, the route most customers take with its established models.

The most recent data suggests sales remain under pressure in the United States. According to the Dominion Cross-Sell Report, a compilation drawn from state motor vehicle records, registrations of new Tesla cars have improved from earlier in the year but remain below levels of the fourth quarter.

In April, 11,707 new Teslas were registered in a 23-state region covered by the report. The states include California, Texas, Florida and Washington, all major markets for Tesla. In January, registrations in the same states totaled 23,310 cars. Registration totals tend to reflect deliveries of the previous month because the data is often compiled a few weeks after cars are actually sold.

In a follow-up May 29, Musk told employees that the company must move faster to hit its sales goal.

“We have a lot of vehicle deliveries to catch up to in order to have a successful quarter,” he said.

The reports that accompanied Tesla’s stock bounce last week — from the online publications Electrek, which has written favorably about Tesla and its vehicles, and Inside EV — still pointed to sales or registration rates that fall short of Tesla’s goals.

The Model 3 was once expected to become a solid moneymaker, but that, too, is uncertain. The base model has the same battery used by a higher-priced version of the car, but software lowers its range between charges. The result is a car that sells for less but costs about the same to produce.

Even if the $35,000 Model 3 lifts deliveries in the second quarter, Tesla will be hard-pressed to reach its full-year target of delivering 360,000 to 400,000 cars. At its current sales pace, the company will probably need to sell at least 100,000 cars in both the third and fourth quarters — a level it has never achieved.

In a May 16 email to employees, Musk appeared to signal concern when he called for examining every expense “no matter how small” as part of a “hard-core” cost-cutting push to reduce losses.

“All expenses of any kind anywhere in the world, including parts, salary, travel expenses, rent, literally every payment that leaves our bank account must be reviewed,” he wrote. “It is the only way for Tesla to become financially sustainable.”

Other hurdles lie ahead. On July 1, the tax credit for Tesla buyers will decline again, to $1,875, and that could further hamper sales in the United States, said Jeffrey Osborne of the investment bank Cowen & Co.

“Most people think that’s when the rubber meets the road, when that tax credit drops,” he said.

On May 28, Osborne set a new target price for Tesla shares at $140, $10 below his previous target. The main reason: Cowen sees lower demand for the Model 3 this year and next.

Tesla declined to comment on the bearish reports by analysts.

For all its setbacks, the company has a fervently loyal customer base and offers technology no other automaker can match. Tannia Schrieber, a talent-management consultant from Wynnewood, Pennsylvania, bought a black all-wheel-drive Model 3 in September and especially likes the way Tesla is able to add features like extended battery range by over-the-air software updates, a capability it pioneered.

“Every two weeks there’s something new and cool about the car,” she said. “I love it.”

And Musk has not let Tesla’s challenges dampen his conviction that his company will beat the odds. In April, at a meeting with analysts called Autonomy Day, he made a bold announcement: By next year, Tesla cars will be able to drive themselves. Furthermore, he declared, Tesla will have as many as a million “robotaxis” operating in an Uber-like ride service that would become a more lucrative business than selling cars.

While General Motors Co., Ford Motor Co., Waymo and Uber itself all aim to develop driverless taxis, they believe self-driving vehicles are several years away from widespread use.

“If Elon is right, they are a decade ahead of everybody,” said David Whiston, a Morningstar analyst. But Musk’s challenge is to prove it.

“The market is a lot more skeptical about Elon and Tesla now,” Whiston said. “There’s a lot more concern.”