The investigator who tails men online

Marie Schembri has been a private eye for more than 30 years. Now, the professed feminist's work has gone from cloak-and-dagger to point-and-click, protecting women from scams and stalkers 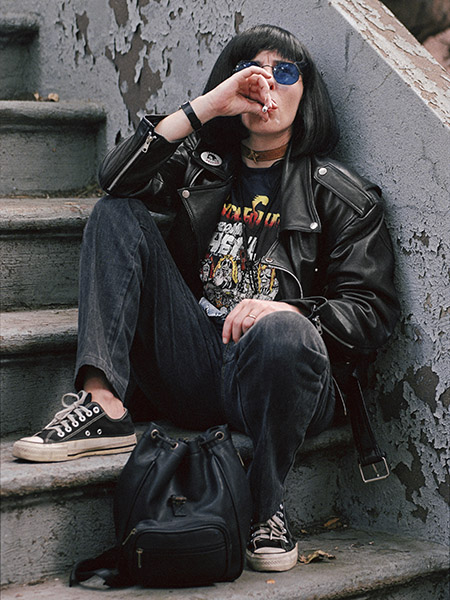 Marie Schembri, a private eye, in her “East Side biker chick” disguise in New York, Aug. 17, 1995. In the beginning, Schembri relied on disguises as she tracked down grifters, liars and cads, but today her get-ups gather dust as she does most of her sleuthing online for women who are trying to protect themselves from a broken heart, a scam or something much worse. (Jose R. Lopez/The New York Times).


It’s a tale as old as love itself, or at least as old as the internet. Girl meets boy. Girl falls for boy. Girl starts to suspect that boy may secretly be a married father of two in Buffalo.

That’s where Marie Schembri comes in.

Schembri has been a private eye for more than 30 years, tracking down grifters, liars and cads from her Brooklyn base. When The New York Times first met her, in 1995, she was a queen of disguise. With a wig, a pair of glasses or some prop bubble gum, Schembri transformed herself into a high-powered businesswoman, a dowdy schoolteacher or a casual, 20-something persona she called “Queens woman.”

When we ran across the Times photos decades later, we had to track her down.

Twenty-four years later, she is still investigating. But the get-ups that were once the tools of her trade are gathering dust and rarely called into action. These days, all Schembri really needs to do most of her sleuthing is a cellphone and an internet connection.

“You don’t have to sit outside someone’s house to see when they’re coming and going,” she explained. “You can track them from anywhere.”

From “The Batcave” — the third-floor office in her Boerum Hill brownstone, which was made to look like a medieval chamber, its sky-blue walls dotted with gold fleurs-de-lis around a mural of a 15th-century French countryside — Schembri trawls the internet looking for that telltale Venmo charge, the contract of sale for that secret apartment in the city, the great-uncle’s obituary that lists a wife and children.

And as her work has gone from cloak-and-dagger to point-and-click, her clients have changed as well: There are fewer jealous husbands trying to sniff out infidelity, she said, and more women who, on the verge of a relationship, are trying to protect themselves from a broken heart, a scam or something much worse. Women are far more likely than men to be abused or stalked by an intimate partner, according to the Centers for Disease Control and Prevention.

For Schembri, a married mother of two and a professed feminist, the clientele shift was a welcome change. “It used to be the men had all the money, and they hired all the lawyers and picked on the women and went after them,” she said. It ate at her, especially when she was starting out.

“I wondered, ‘Would I be on the right side of the fight?’” Schembri recalled. “That haunted me. Because you’re a hired hand. You work for who hires you.”

Schembri fell into the investigative profession almost by accident. After graduating from Hunter College in 1980 with a degree in economics, she worked for New York City as a tax investigator, specializing in real estate cases. After five years, she was ready to try something new.

While looking up records at the courthouse, she ran into a friend of her husband who was working for a private investigation group. He had been hired by a congressional committee to investigate Ferdinand Marcos, then the president of the Philippines, and his family’s real estate holdings in the United States. 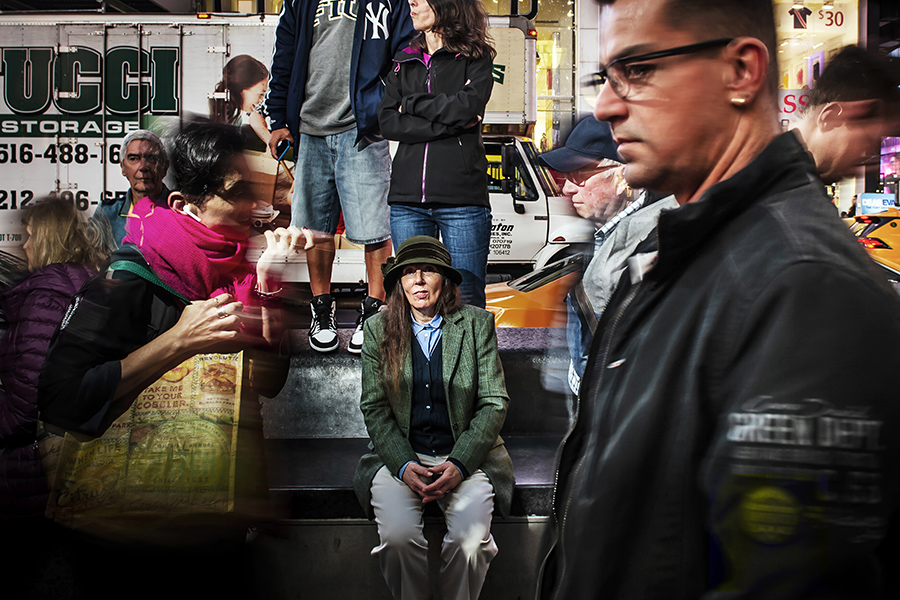 Marie Schembri, a private eye for more than 30 years, in Times Square in New York, Oct. 8, 2019. In the beginning, Schembri relied on disguises as she tracked down grifters, liars and cads, but today her get-ups gather dust as she does most of her sleuthing online for women who are trying to protect themselves from a broken heart, a scam or something much worse. (Dina Litovsky/The New York Times).

“They had all these documents, but they didn’t know what they were looking for,” Schembri said. So she took a week’s vacation, went to Washington and locked herself in a room with the boxes. She said she came out with proof that the Marcoses owned four high-rises in New York, and with a new career.

Schembri said she was initially drawn to the painstaking — what some might call the mind-numbing — labor of investigation. She loved sorting through page after page of documents and records, searching for that needle in the haystack.

“I told them I didn’t want to do cloak-and-dagger stuff,” she said.

But she said when she did start to do the surveillance and tailing and subterfuge traditionally associated with the trade of a professional snoop, she was surprised by how good she was at it.

A spy’s job depends on the ability to make herself invisible, to inhabit the background of someone’s day. It’s a skill Schembri seemingly perfected. With a change of clothes and the swap of a wig, she could transform herself from a downtown punk to an uptown dame. She could sometimes cycle through several personas a day, adding and removing glasses or a hat, shedding a jacket to unveil a bright top, peeling that off to reveal a plain T-shirt.

“When people are looking at you, what they predominantly see is your torso, so that’s what you change,” she said. “You can leave jeans alone. Everyone wears jeans.”

Clothing can also be an investigative tool, she said, a way to put witnesses at ease when you have 10 seconds between their answering the door and either inviting you in or slamming it in your face. “If people look like you, you’re more likely to trust them,” she added.

Schembri is petite, with long brown hair and a pliable face that can transform from detached cool to almost cartoonish befuddlement to beaming delight in an instant. Her diminutive frame, she said, means she is frequently underestimated or overlooked — which, in the spy game, works to her advantage.

“You don’t come across as the stereotype of the private detective,” she said. “You’re not who people are looking for.”

Her gender also comes in handy when trying to blend in. If the person she’s tailing is walking with someone else, engaged in a conversation she wants to overhear, she said, she can get close enough to eavesdrop without raising alarm bells. “I don’t think you’d be able to do that if you’re a man,” she added.

The stereotypical PI — Sam Spade or Philip Marlowe, say — is tortured, masculine, likely to be found skulking in a dark alley and sporting a trench coat. But female private eyes have been around almost as long as the profession itself. Allan Pinkerton, who founded the first private detective agency in the United States in 1850, hired the country’s first female investigator in 1856.

Schembri recalled that in 1995, when The Times first interviewed her, the industry was still a boys’ club that clung to noir stereotypes of what makes for a good snoop. Now, she said, “I think the field has opened itself up to more people.”

Data from New York’s Society of Professional Investigators backs this up: Today, about 40% of its members are women, and about 40% are people of color, according to the group’s president, Bruce Sackman. But those numbers have “increased dramatically over the last 10 years,” he said.

Nowadays, Schembri’s referrals (she relies only on word-of-mouth) skew more toward blossoming relationships. A generation raised on the internet and surrounded by headlines trumpeting catfishing and high divorce rates has learned to be wary, to trust but verify when it comes to matters of the heart.

Schembri can’t blame people. She knows firsthand how calamitous the consequences of a toxic relationship can be: In 2001, she was hired by Ted Ammon, an investment banker in the middle of a messy divorce and custody battle, to dig up dirt on his estranged wife’s new boyfriend. Days before the divorce was to be finalized, Ammon was bludgeoned to death in his East Hampton, New York, home by the boyfriend, an electrician named Daniel Pelosi, who is now doing 25 to life in the state’s Attica prison.

“That was awful,” she said. “That was like, I don’t want to be in this business, I don’t want to do this anymore.” It’s the case that has stuck with her more than any other, and it’s why she now avoids nasty divorces or custody cases.

“It took me a long time to recover from that,” she said.

Schembri doesn’t do much surveillance anymore. (As she put it: “I’m 61 years old. I can’t sit in cars waiting for people to come out of buildings.”) For in-person jobs, she usually contracts out to a team. But as technology advances, those cases are becoming few and far between.

When once she would sit in her car outside a person’s building all day, now she can stick a camera to a lamp post and monitor her target from the comfort of her desk. And as cameras have increased in quality and connectivity, they’ve also decreased in size: The ones her team uses, Schembri said, are the size of a pencil eraser and can easily stick on the lid of a coffee cup.

And it’s not just the latte on an adjacent table that you should be aware of.

“People walk around with their phones all the time,” she said. “You can just film something with your cellphone, and not only is the footage recognized even in the federal courts as legitimate, but you can download it and it’s time-stamped.”

So, with the advances in tech, and the ease of using Google and social media, why would someone need to hire a sleuth?

Schembri understands the skepticism. But whether the information people find with a few taps is good or bad, she said, is a question often best left to someone with decades of experience.

“Social media can be a rabbit hole,” she said.

A good private eye, she added, should possess a dogged fastidiousness and a well-honed sense for when a story does not add up — both traits that come in handy when separating the shiny cyber facade from the truth. Meaning, you can’t believe everything you and your friends dig up over a round of margaritas.

While the cases and techniques may have changed, Schembri approaches her work much like she always has.

“You have to let the documents tell you the truth,” she said.