The man who faked cancer for years to raise money

After John Looker announced he had brain cancer, he became a star fund-raiser and the heart of Pelotonia, a charity event in Ohio that raises millions of dollars. But something wasn't right. 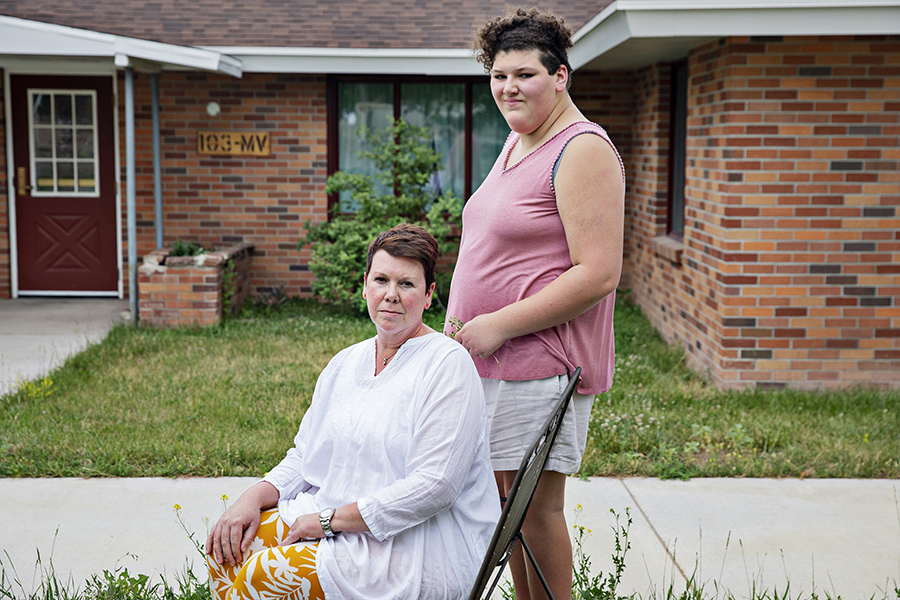 Erika Decker, left, who blew the whistle on Pelotonia biker John Looker; and her daughter, Lily, a cancer survivor, at the Wyoming Life Resource Center in Lander, Wyo., July 15, 2019. After Looker announced he had brain cancer, he became a star fund-raiser and the heart of Pelotonia, a charity event in Ohio that raises millions of dollars. But something wasn’t right. (Kim Raff/The New York Times)


Erika Decker knew three things about John Looker when he reached out to her on Facebook in 2014: He was a cult figure in Columbus, Ohio, where they both lived. He had become a face of the Pelotonia bike-a-thon, which has raised millions of dollars to fight cancer. And he had the same brain cancer as her young daughter, Lily.

Looker had read about Lily in The Columbus Dispatch and wanted to show his support. “I know I’m a stranger to you and your family, but please know that I am with you all in spirit today,” he wrote.

A few days later, another note: “I would love to come visit with you and your family.”

Decker, 46, was curious. So one night she scoured his Facebook page. It was loaded with health updates, inspirational quotations and community adoration. But something didn’t seem right.

She wrote back and asked for the name of his oncologist.

“I generally don’t share it because several years ago I did, and she got bombarded by phone calls from the Pelotonia community asking her to do more for me,” he wrote. Decker repeated her question. Looker “unfriended” her on Facebook.

Looker’s rise to celebrity cancer patient officially began Aug. 19, 2011, in a field outside Columbus. It was at an opening ceremony for Pelotonia, which was founded in 2008. Sponsors included NetJets, Huntington bank and L Brands Foundation. Participants cycled as many as 180 miles and were required to raise at least $1,200. One hundred percent of the donations benefited cancer research at the James Cancer Hospital and Solove Research Institute.

Pelotonia is one of hundreds of endurance events that raise money for charities, tapping a fundraising source — friends, relatives and colleagues of participants — that has become lucrative.

Lance Armstrong kicked off the first Pelotonia in 2009. Chris Spielman, a retired NFL player whose wife, Stefanie, died of breast cancer, was the next year’s spokesman. By the time Looker came on in 2011, Pelotonia was up to 5,000 participants and had raised some $25 million. The total entering this year’s event, which begins Friday, was more than $194 million.

Looker addressed the crowd on a large video screen in 2011. “Let me make this short and sweet,” he said. “I have Stage 4 terminal brain cancer. I will ride tomorrow. And I won’t be making any excuses.”

He bounded onstage in khaki shorts and a blue T-shirt with Pelotonia’s “One Goal” slogan on it. A roar erupted.

“I was in awe,” Dr. Diane LeMay, 54, a pediatrician and first-time Pelotonia participant, said.

The next year, Looker, who grew up in Newark, Ohio, sang the national anthem. By then he was a local star. He couldn’t go anywhere without someone snapping a photo or offering to buy him dinner.

“I was Prince Philip, and he was the queen,” Addison said.

Looker’s most devoted followers called themselves Looker’s Hookers. They logged hundreds of miles, raising money for Pelotonia in Looker’s honor. They posted images on social media with a #loveforlooker hashtag. They bought cookies — Lookies — that Looker had baked, and they worked at his yard sale each spring. Donations were in cash or in checks made out to Looker.

“He was always very sweet and charming,” said Joshua Platt, 45, a marketing executive and member of Looker’s brigade. Platt’s sister was fighting breast cancer, and his mother-in-law had died with a glioblastoma tumor, the type of tumor Looker said he had.

Looker seemed to be beating the odds. “That brought a lot of hope,” Platt said.

Despite his illness, he was generous with his time. He reached out to cancer patients and their families. That’s how he met Decker and how everything began to come apart.

After reviewing his Facebook page, Decker’s fraud detector went off. The tumors did not make sense to her; they didn’t metastasize but just moved around.

“He would be OK, and then they’d find one in his chest or head,” said Decker, who now lives in Cody, Wyoming. “Every spring before Pelotonia registration his cancer would return. And he was always overweight.”

In early 2015, Decker spoke with Michelle Merlino, who had worked with Looker at Continental Office, a furniture supply company. Looker was captain of Continental’s cycling team, which raised money for Pelotonia. From 2011 to 2013, Merlino, 48, was a Looker disciple, joining him on weekend rides and donating to his fund. But then she started to have doubts: Looker did not seem to spend any time in a hospital; instead, he held a full-time job, rode his bike and baked a dozen cookies a day.

Merlino and Decker took their concerns to Kelley Griesmer, Pelotonia’s chief operating officer. To their surprise, she said Pelotonia had its own doubts. But regulations on patient privacy prevented organizers from questioning his doctor, and there was no evidence that he had misappropriated funds.

Griesmer, a former bankruptcy lawyer who now runs the Women’s Fund of Central Ohio, a nonprofit, noticed that Looker enjoyed the attention he got from his relationship with the cycling event and that the medical information he shared seemed extraordinary.

“He was ingratiating himself with riders without our request, and I was concerned by that,” she said. “At the same time, I was, and am in, no position to say he was lying.”

And yet Pelotonia did remove Looker’s promotional video from its website, cut him out of publicity materials and removed him from reports. With only rumors to go on at the time, it did not bar him from riding in the event or from soliciting money, and said nothing publicly.

Merlino and Decker were not happy. Shouldn’t the community know that the Pelotonia legend was possibly a fake?

Some of Looker’s closest friends were also becoming uneasy.

In May 2016, LeMay was one of four people helping Looker with his yard sale. Anything she sold was supposed to be deposited into her Pelotonia fundraising account. By October, the money still wasn’t there, she said.

Then, in August 2018, at least seven years into Looker’s supposed illness, two other Looker’s Hookers, Paul Harrison and Dave MacPhail, grew doubtful. MacPhail, 57, had known Looker since the mid ’90s. Back then, he recalled, Looker said he had colon cancer.

The three decided to confront Looker. But first they sat down with Addison.

Addison didn’t believe it. He and Looker had been together 17 years; how could his partner have made up a disease? “You’d never think someone would lie about having cancer,” Addison said.

About a week later, LeMay and MacPhail met with Pelotonia’s chief executive, Doug Ulman, who once ran Lance Armstrong’s Livestrong foundation, and two other employees.

A spokeswoman for Pelotonia said Ulman was simply reassuring LeMay and MacPhail that they shouldn’t beat themselves up about the estimated loss, thought to be less than $1,500.

On Aug. 25, LeMay, MacPhail and Harrison arrived at Addison’s Colonial-style house, where Looker had lived for almost two decades.

“I know you don’t have cancer,” MacPhail said.

Looker insisted he did.

MacPhail asked for his doctor’s name.

They Googled it. Nothing.

LeMay asked for medical records, a pill bottle, an explanation of benefits. Looker, who kept his head shaved like a cancer patient, could not provide anything. Within an hour, they said, he admitted that he had made the whole thing up and that he had used some of the money he had collected over the years for “living expenses.”

Looker rubbed his head, looked down at the floor and cried.

LeMay and MacPhail took him to an emergency room. Then they called his mother.

The group then went to Pelotonia. Four days later, Ulman issued a statement. A three-time cancer survivor, he acknowledged that Pelotonia had heard rumors about Looker’s deception three years earlier, had removed publicity related to him and had now filed a complaint with the Charitable Law Section of the Ohio attorney general’s office over whether he kept cash donations.

LeMay and MacPhail filed a complaint with the Columbus Division of Police, claiming that Looker had withheld at least $1,300 in donations from the May 2016 garage sale. There were other complaints from residents who said Looker had not turned over money supposedly raised on their behalf.

In an interview with police, Looker confessed to keeping $800 to $900 because he was “strapped for cash.” He said he had been given a diagnosis as “manic depressant and bipolar,” which caused him to lie about the brain cancer.

Police declined to pursue charges; according to a spokeswoman, there was not enough evidence.

In April, LeMay filed a complaint with the Ohio attorney general’s office against Pelotonia. “They allowed someone to perpetuate a myth and a fraud to raise money,” she said.

Platt said he believes Pelotonia had “a moral obligation” to do more to protect the community.

A press officer for Pelotonia said: “People are conflating 2015 with 2018 circumstances, which are vastly different. The organization was made aware of additional facts against Looker in 2018, upon which they acted immediately.”

This week, the attorney general’s office announced a settlement with Looker, 50. He agreed to pay $1,800 in restitution and a $2,000 civil fine. He also cannot solicit donations or hold any position with a charitable organization in Ohio, except as a volunteer uninvolved with charitable trust money.

In an email, Daniel Rosenthal, chairman of Pelotonia’s board, said that “Pelotonia simply cannot independently verify what each individual participant says about themselves.”

In a statement to the Pelotonia community, Ulman said that before the charity features survivors in any way, they will have to sign a release guaranteeing their statements are true.

No one has heard from Looker since his confession. His ex, Addison, has insisted he was always in the dark, traveling for work and never accompanying Looker to medical appointments.

LeMay is trying to work through the betrayal. How could she, a doctor, have fallen for it?

Her one consolation is that she believes Looker targeted her precisely because her profession helped him look better.

“He was so good at his crime,” she said.