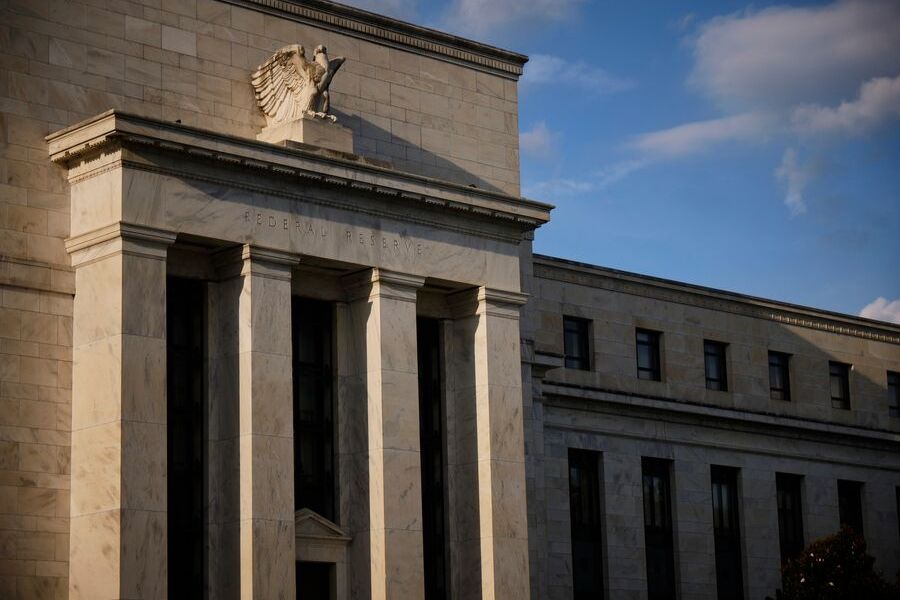 The Federal Reserve building in Washington, on Tuesday, Sept. 17, 2019. Fed officials are expected to cut interest rates for a second time on Wednesday, a move that could prove divisive among Fed officials and aggravate President Trump’s anger toward the central bank.
Image: T.J. Kirkpatrick/The New York Times

WASHINGTON — The Federal Reserve lowered interest rates by a quarter of a percentage point Wednesday, its second cut since late July, and suggested it was prepared to move aggressively if the United States economy showed additional signs of weakening. For now, a growing number of Fed officials expect one more cut this year, based on economic projections released after the Fed’s two-day meeting. But a murky economic outlook and a division within the Fed’s policy-setting committee prevented a clear message about what comes next. Jerome H. Powell, the Fed chair, said at a news conference after the meeting that the United States economy remained strong and unemployment low, but that “there are risks to this positive outlook.” If the economy weakens, he said, a “more extensive sequence” of rate cuts could be appropriate. “Our eyes are open, we’re watching the situation,” Powell said, explaining that the Fed would stop cutting rates to sustain the expansion only “when we think we’ve done enough.” “There may come a time when the economy weakens and we would then have to cut more aggressively,” he continued. “We don’t know. We’re going to be watching things carefully, the incoming data and the evolving situation.” The Fed’s announcement Wednesday did little to appease President Donald Trump, who has been pushing the central bank to cut interest rates to zero — or even into negative territory. The Fed’s policy interest rate is now set in a range of 1.75 to 2%, and not a single official sees it falling lower than 1.5 to 1.75% through the end of 2022. “Jay Powell and the Federal Reserve Fail Again,” Trump said in a tweet shortly after the Fed’s announcement. “No ‘guts,’ no sense, no vision! A terrible communicator!” Stocks initially fell on the Fed’s announcement. But they ended slightly higher on the day, and Treasury yields barely moved, suggesting that the Fed’s decision and communication were roughly in line with investor expectations. Fed officials are keeping their options open because they face an uncertain outlook. Businesses are hiring and consumers are spending, but Trump’s trade war and prospects of an unruly British withdrawal from the European Union have markets on edge. Inflation has been stuck below the Fed’s 2% annual target, giving officials room to lower rates without worrying about runaway price gains. “Since the middle of last year, the global growth outlook has weakened,” Powell said. “Trade policy tensions have waxed and waned,” and “elevated uncertainty” is weighing on business investment and exports, he said. Given those risks, momentum has shifted toward further accommodation. While the median Fed official expects rates to stay at the current level through the end of the year, seven of 17 expect another rate cut. Not a single official expected three rate cuts in 2019 when the central bank last released economic projections in June. The decision to lower borrowing costs twice in three months is itself a significant pivot for the central bank, which raised rates four times in 2018 and planned to be “patient” on rate moves as recently as March. Powell said the change in the Fed’s policy stance over the course of the year was “the main takeaway.” And in its official statement after its meeting, the committee again pledged to “act as appropriate to sustain the expansion.” But against a complicated economic backdrop, officials are increasingly divided. Three members of the rate-setting Federal Open Market Committee dissented in this month’s vote, the most no votes at a single meeting since 2016. James Bullard, the president of the Federal Reserve Bank of St. Louis, wanted a bigger cut. Esther George, who heads the Federal Reserve Bank of Kansas City, and Eric Rosengren, who heads the Federal Reserve Bank of Boston, thought that the central bank should keep borrowing costs steady. George and Rosengren also voted against the July rate cut. Powell acknowledged those divisions, calling it “a time of difficult judgments” and adding that the bulk of the committee was assessing the economy “meeting by meeting.” Powell also pushed back on Trump’s recent call for the Fed to slash rates below zero, saying such an idea was rejected during the height of the 2008 financial crisis and would not be high on the list of options if the economy worsened. If the Fed is forced to cut interest rates back to rock bottom, he said, it will again turn to bond-buying programs to provide added stimulus. “I do not think we would be looking at using negative rates,” he said. Meanwhile, the Fed has struggled to coax inflation up to its 2% goal. The central bank aims for steady inflation that is low enough to allow for consumer comfort but high enough to leave policymakers extra headroom to cut interest rates, which include price gains, during a downturn. Inflation came in at 1.6% in July, based on the Fed’s preferred gauge, and has been mired below its target for years. Inflation expectations, as measured by one New York Fed survey, have slipped both in the short- and longer-term. If growth should take a hit, it could make it hard for the central bank to ever achieve higher price increases, hurting its credibility.