Vodafone-Idea merger: Joining hands a good idea, but benefits will accrue over time 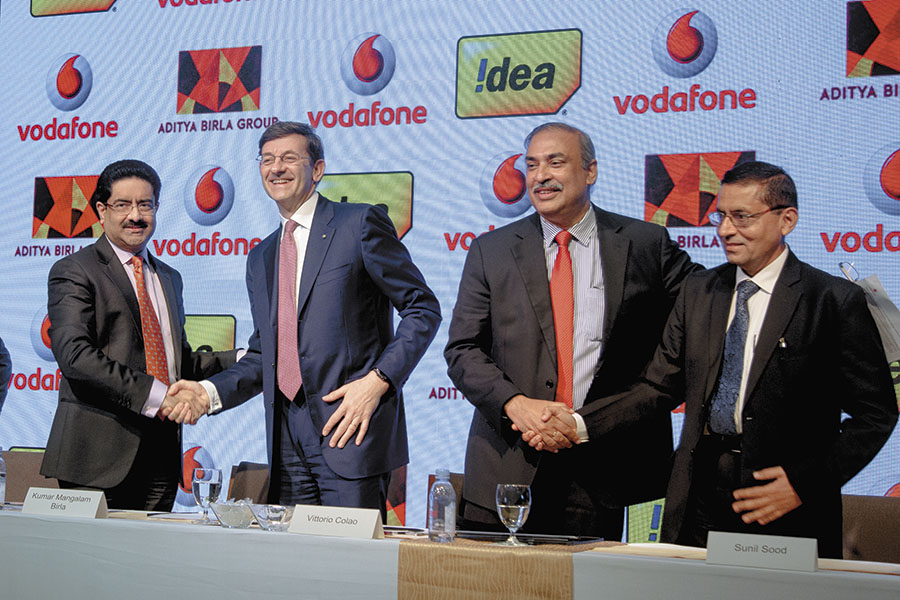 On March 20, during a call with an analyst, Vittorio Colao, the chief executive officer of British telecom major Vodafone Group Plc, said that his Outlook Calendar showed he had met Aditya Birla Group Chairman Kumar Mangalam Birla 10-12 times in the past few months.

These meetings, and hectic negotiations helmed by trusted lieutenants of the two chiefs, stitched together the mega partnership that Vodafone’s Indian arm has entered into with Idea Cellular, the mobile telephony arm of the metals-to-cement and retail conglomerate that Birla leads. While Vodafone was supported by an array of marquee global investment banks, including Morgan Stanley, Robey Warshaw, Bank of America Merrill Lynch, Kotak Investment Banking, Rothschild and UBS, the Aditya Birla Group decided to work out the contours of the deal itself—aided by in-house mergers and acquisitions (M&A) experts.

The result of these endeavours was the March 20 announcement of the mother of all M&A deals in the Indian telecom sector—a complicated reverse merger of Vodafone India into Idea Cellular to create what Colao and Birla describe as a “partnership of equals”, and India’s largest telco by subscriber base and revenue market share. At present, Vodafone is India’s second largest telco and Idea is third largest.
The deal has been structured in a manner whereby, upon completion, Vodafone will end up with a 45.1 percent stake in the combined entity and Idea will hold 26 percent. To enable this, Vodafone will need to sell a 4.9 percent stake to Idea upon the completion of the merger for Rs 3,900 crore in cash. Idea’s other existing shareholders will continue holding the remaining stake in the company. The deal envisages the equity holding of Vodafone and Aditya Birla Group equalising over time. Consequently, the latter has reserved the right to acquire an additional 9.5 percent from Vodafone over the next four years. If Birla’s group doesn’t equalise its stake in this period, Vodafone will subsequently reduce its holding through a market mechanism.

Based on Idea’s undisturbed share price of Rs 72.50 per share (30-trading day average price as on January 27), the transaction values Vodafone at Rs 82,800 crore and Idea at Rs 72,200 crore. The combined entity is also likely to end up with a consolidated debt of Rs 1.07 lakh crore and a debt to Ebitda (earnings before interest, tax, depreciation and amortisation) ratio of 4.4:1.

The two companies expect estimated cost and capex synergies emanating from the transaction to have a net present value of Rs 67,000 crore and savings on operating expenses to the tune of Rs 14,000 crore by the fourth full year post completion of the transaction.

The merged entity will further look to pare debt by monetising the standalone telecom towers that both partners will contribute to the company, as well as Idea’s 11.15 percent stake in Indus Towers. The capex and opex synergies and the asset monetisation plans are expected to bring down Vodafone-Idea’s debt to Ebitda ratio to 3:1.

The rationale behind the deal is clear: In a market characterised by high spectrum costs and a cut-throat tariff war between incumbents and a new challenger, Reliance Jio Infocomm, joining hands and combining assets leads to the creation of a stronger entity with more muscle power to withstand such competition.

With free voice and high-speed data services, Jio, a part of the Mukesh Ambani-led Reliance Industries Ltd, has disrupted the market since its entry in September 2016. It crossed the milestone of 100 million subscribers in less than six months of its launch, though it is yet to corner any revenue market share since it is not charging for its services at present. Consequently, incumbent telcos like Vodafone, Idea and market leader Bharti Airtel have been forced to drop prices and in the face of stiff operating costs (including finance charges), the impact on financials is clearly visible.

While telecom sector experts agree that the merger is a step in the expected direction, they are as yet uncertain of the benefits that will accrue. The deal is expected to close only in 2018 and the managements of the two companies have indicated that expected synergies from the transaction will kick in over a period of four years from the completion of the deal. Depending on when in 2018 the deal closes, realisation of the benefits of the merger can backend to between five and six years from now.

This, analysts say, leads to ambiguity with respect to the efficacy of the merger. The idea behind the merger is cost savings and asset monetisation opportunities, aiding financial performance as the combined entity earns higher revenues over time. But the Indian telecom space is evolving and no one is hazarding a guess as to what it may look like six years from now. Vodafone-Idea’s performance will be judged relative to that of its peers, all of whom are working out their own strategies.

While Bharti Airtel is acquiring the assets of Norwegian telecom firm Telenor, which has decided to exit India, Anil Ambani-led Reliance Communications has worked out a three-way partnership between Aircel, Sistema Shyam TeleServices Ltd and itself. The other significant change that will take place beginning April 1 is that Jio will start charging for its services and the extent of revenue market share it manages to capture will have to be factored in.
“Overall, given the longish timelines for deal conclusion, even longer timelines on synergies, retention of competitive positioning and the extent of synergies projected—we believe the phase of seeking positives of the merger from the Idea stock will now be replaced with studying the assumptions and exploring the downside risks,” say analysts Sunil Tirumalai and Viral Shah of Credit Suisse in a research note.

The plan to merge Vodafone with Idea is also symptomatic of the paradigm shift in the Indian telecom sector, where data takes precedence over voice services. At the press meet on March 20, Colao stated that the united entity will be able to offer “unlimited voice”, which has become the norm, and higher volume of high-speed data. The merged entity will hold around 1850 MHz of spectrum, the highest in the industry, which can enable them to offer data speeds of up to 250 MB per second.

“Contrary to voice, when you compete in data—and taking into account the sheer volume of data being consumed at present—you need a sound technology and marketing strategy,” says Amresh Nandan, research director at Gartner Inc. “That realisation is striking the telcos and forcing them to relook at their overall business strategy.”

But where Vodafone-Idea will still lack is the extent of the optical fibre networks they own. “We believe they lack adequate optical fibre network, which will be a weakness going forward. As data traffic increases, the demand for network resources on the backhaul will rise,” says Jayanth Kolla, co-founder and partner at Convergence Catalyst, a Bengaluru-based digital technologies and telecom consulting firm.

(Reliance Industries is the owner of Network18, publishers of Forbes India)