What's next for Trump? All you need to know

Now that Donald Trump has been impeached, a senate trial is next. Here's what we know about how it will unfold 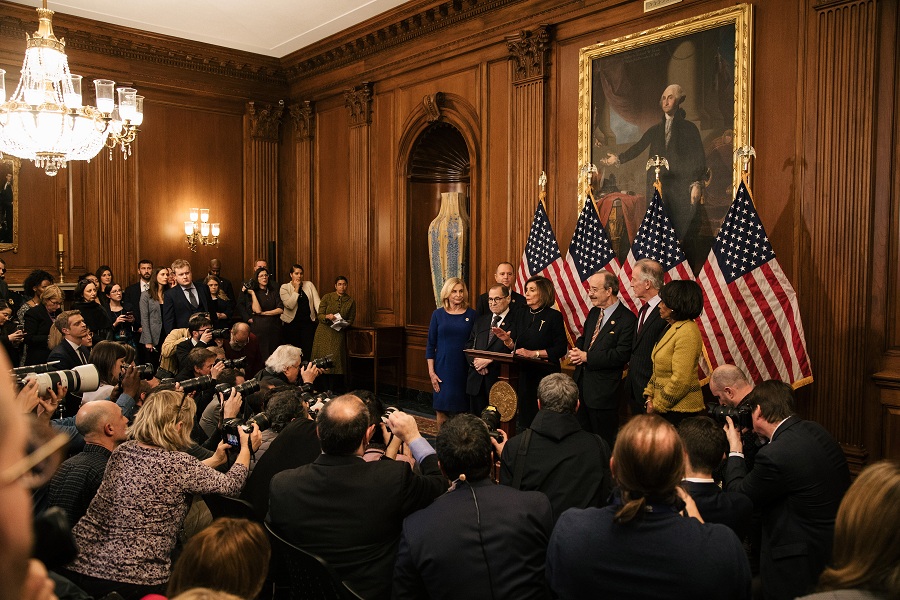 House Speaker Nancy Pelosi (D-Calif.), surrounded by leaders of several key committees, speaks to reporters after the House voted to impeach President Donald Trump, at the Capitol in Washington, Dec. 18, 2019. The House impeached Trump for obstruction of Congress and abuse of power, making him the third president in history to be charged with committing high crimes and misdemeanors and face removal by the Senate.
Image: Alyssa Schukar/The New York Times


Now that the House has voted to impeach President Donald Trump, the matter moves to the Senate for a trial — the third for an American president.

A two-thirds majority — 67 senators — is required to convict and remove the president. Republicans control the Senate, 53-47, and Trump is widely expected to be acquitted. But Democrats have argued that impeaching him is a moral necessity, even if he remains in office.

Trump is only the third president to face a Senate trial for “high crimes and misdemeanors.” (The first two, Andrew Johnson and Bill Clinton, were both acquitted. Another president, Richard Nixon, resigned rather than face impeachment and trial.)

Here’s what we know about how it would unfold.

— When is the trial expected? How long will it be?
The trial is expected to begin in early January, and it’s unclear how long it will last. Republicans and Democrats alike have expressed an interest in keeping it short.

The 1999 trial of Clinton, who was tried on two articles of impeachment — perjury and obstruction of justice — lasted about five weeks.

— Who does what?
To start, Speaker Nancy Pelosi of California would appoint a team of lawmakers to act as prosecutors during the trial. They are called managers, and they present the articles of impeachment to the Senate.

The chief justice of the United States, John Roberts, would preside over the trial, and a legal team would defend Trump. Pat Cipollone, the White House counsel, is expected to represent Trump, along with the president’s outside lawyers.

The Senate would have to come to an agreement on the trial procedures. Sens. Mitch McConnell of Kentucky and Chuck Schumer of New York, the Republican and Democratic leaders, have already sparred over that task. (More on that later.)

— How will it work?
Any senator could propose a motion to dismiss the charges. (A simple majority vote would be needed.)

But if the trial proceeds, there would be opening and closing statements, questions from senators to the managers and defense lawyers, and, possibly, more subpoenas, evidence requests and witnesses called. Deliberations would likely happen in a closed session before a vote.

Chief Justice William Rehnquist presided over Clinton’s trial, during which senators were allowed to ask questions of the prosecution and defense through written notecards. Rehnquist read them aloud.

When the White House counsel leading Clinton’s defense, Charles Ruff, wanted to rebut, he put down his pen, which signaled Democratic aides to submit a question asking Ruff to comment on assertions made by the opposition.

— What are the rules?
Essentially, it’s up to senators to decide the format of the trial, but they will most likely follow a set of rules governing impeachment trials that were revised in the 1980s.

Senators also act as the jury and must take an oath to render “impartial justice.” (A handful of the jurors are running for president.)

Schumer laid out a detailed proposal this week that called for additional witnesses who have not previously testified (including Mick Mulvaney, Trump’s acting chief of staff, and John Bolton, the president’s former national security adviser) as well as subpoenas for additional documents that the White House has withheld.

McConnell rejected Democrats’ demands to call White House officials as witnesses and said he had no obligation to be evenhanded or impartial during the proceedings. He is working with the White House to establish rules for the trial, trying to balance Trump’s desire for vindication with lawmakers’ concerns.

During Clinton’s trial, witnesses were not allowed to appear in person. Senators were shown videotaped portions of their testimony instead.

“When the Senate decided what the rules were going to be for our trial, they really made them up as they went along,” Gregory Craig, who helped defend Clinton in his impeachment proceeding and later served as White House counsel to President Barack Obama, told The New York Times in 2017.

— What does the Constitution say about all this?
The Constitution permits Congress to remove presidents before their term is up if enough lawmakers vote to say that they have committed “treason, bribery, or other high crimes and misdemeanors.”

But it does not explain how lawmakers should interpret what constitutes those offenses. Similarly, there is no established standard of proof that must be met.

— How might it end?
A conviction would require a two-thirds vote on at least one article, resulting in the president’s removal from office, with no opportunity to appeal. The vice president would take over as president.

The Senate could subsequently vote to disqualify the president from future office, using a simple majority vote.

Although a conviction is unlikely — barring some unexpected development — the trial could have political ramifications for both parties.

— How did previous impeachment trials end?
The Johnson trial, in 1868, was anticlimactic and mired in constant battles over process and authority between long-winded men in love with their own words, according to Brenda Wineapple, the author of “The Impeachers.”

In the end, enough Republicans rallied with Democrats to spare Johnson from conviction by a single vote.

On Feb. 12, 1999, the Senate acquitted Clinton, falling short of even a majority vote on either of the charges against him.

Tweets by @forbesindia
Trump impeached for abuse of power and obstruction of Congress
Steering impeachment with an iron grip, Pelosi forges a legacy she never sought