For investors in his Manipal Education and Medical Group, he was the quintessential entrepreneur who multiplied their capital. Today, for tenderfoot startup founders, he is a dream mentor. Just ask Byju's 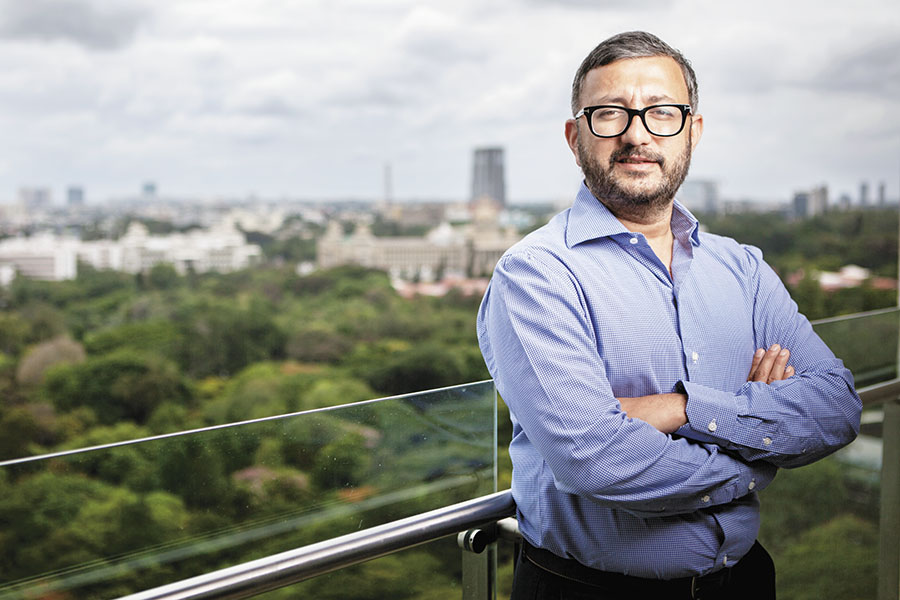 
By virtue of being both an entrepreneur and investor, Ranjan Pai, 44, has seen either ends of the fund-raising spectrum. As chairman of the Manipal Education and Medical Group (MEMG), which runs the Manipal University and Manipal Hospitals, Pai has raised about $700 million in private equity for his group through 16 rounds of funding between 2006 and 2017.

Since 2011, he has also donned the hat of an investor through his proprietary fund Aarin Capital which he set up along with former Infosys veteran TV Mohandas Pai (they are not related). The fund, into which Ranjan Pai has invested $50 million of his personal wealth, has so far infused $80 million into over 30 startups and other venture funds in India and abroad.

It is not surprising, therefore, that his views on the country’s current startup ecosystem are peppered with advice for both parties—the investor and the investee. At a time when startups in India are finding it tough to raise additional capital, Pai says: “An entrepreneur does not have to go to the investor who writes the biggest cheque, or gives the highest valuation. It is important that entrepreneurs get to know their investors in advance and spend time with them.”

At the same time, he underscores the importance of investor returns, saying it is crucial for entrepreneurs to respect investor capital. And he has earned the moral right to say so: Since 2006, MEMG has provided profitable exit routes to its various investors, who have cashed out clocking a neat average return of over 20 percent across 14 exit rounds.

Some have even returned to invest after exiting. PremjiInvest, the investment fund owned by Wipro’s Azim Premji, pumped in $125 million into the group’s education business in 2015 just 18 months after a profitable exit. IDFC Private Equity, too, returned to invest four times across MEMG’s education, health care, student housing and service businesses. The two firms remain invested in MEMG along with TPG Capital which has invested in the group’s health care vertical, Capital International, in education, True North in health care and Kotak Private Equity in health care.

From his dealings with investors, Pai has imbibed much more than just the money. “I have picked up my own investment strategy from my investors,” admits Pai, a Bengaluru-based, self-made billionaire whose current net worth is pegged at $1.72 billion by Forbes.

“He’s an entrepreneur running a large enterprise and having raised private equity money himself, he understands both sides of the table,” says K Ganesh, a serial entrepreneur and partner of the entrepreneurship platform GrowthStory, whose early venture TutorVista was backed by Pai in his personal capacity. “That makes him a great investor to have on your side.”

Aarin Capital, which typically commits $1-2 million in startups, up to their series B round of funding, has also invested in at least 11 funds, some of which operate outside the startup ecosystem like Neev Capital, a real estate-focussed investment firm, and the venture capital firm Singular Capital that invests in small- and mid-cap companies.

Along with Mohandas Pai, Ranjan Pai has been hands-on in shaping the fund’s investment portfolio. “We started out with a few investments in health care in the US and very quickly we got on to India-based investments in health care, education and technology,” says Deepak Natraj, managing director, Aarin Capital. The $80 million that Aarin Capital has deployed in venture funding to date includes recycled capital from the exit of three to four portfolio companies.

“He [Ranjan] has got the right risk appetite, the ability to assess when to proceed, or not to proceed [with a deal] and foresee what the likely problems are,” Natraj avers. However, there are times when Ranjan also goes with his gut instincts, he concedes. A case in point: Edutech startup Byju’s.

Aarin Capital’s investment into Byju’s happened after a chance meeting between the startup’s founder Byju Raveendran and Ranjan Pai in 2012 when the latter was on a visit to his hometown Manipal in Karnataka. Because Pai’s parents were travelling, he checked into the Fortune Inn Valley View hotel, owned by Manipal University.

“The hotel was a beehive of activity and the manager said it was because of this guy [Raveendran] who was conducting coaching classes for CAT exams. There were between 500 and 800 students,” recalls Pai. At breakfast the next day, the hotel manager introduced Pai to Raveendran.

During the course of their interaction, Pai was told that the startup’s offline CAT tutorials had annual revenues of about Rs 12 crore. Pai asked Raveendran if he needed money to grow his business. “I told him that if he wanted to scale, he had to think digital because his offline model may not be scaleable,” recalls Pai.

Ten days later, Raveendran reverted. “He told me that he needed Rs 50 crore. I nearly fell of my chair... I was thinking in the range of $1-2 million [around Rs 5-10 crore at the time],” recalls Pai. Eventually, Pai decided to pump in Rs 50 crore in tranches and Aarin Capital acquired a 26 percent stake in Byju’s in 2013. “There was something about this guy [Raveendran] that was intriguing. He was so confident.”

Aarin Capital has since cashed out on its investment, trimming its holding to around 1 percent by 2016. The fund reaped returns in excess of 10 fold, according to some reports. “It was an exceedingly good return,” is all that Pai is willing to disclose.

Looking back, Pai says what gives him immense satisfaction is not the high returns, but the fact that he helped a startup grow into a successful company. In March this year, Byju’s raised $30 million [around Rs 190 crore] from Belgium-based venture firm Verlinvest at a valuation of over $670 million. “It’s great to make money along the way, I don’t deny that,” admits Pai.

Like Byju’s, there are other potential shining stars in Aarin Capital’s portfolio—Pune-based Praxify, an IT-based health care service provider; Invictus Oncology, which is into cancer-drug discovery, and biopharmaceuticals firm Vyome Biosciences.

At the same time, the fund also had to write off some of its investments. “We are expecting two exits this year and a couple more next year,” says Pai, who began investing in startups much before the term became fashionable.

In 2007, Pai was an early backer in TutorVista, an education venture founded and run by K Ganesh and wife Meena (the couple later founded GrowthStory). The startup was sold to British media group Pearson in 2011 bringing Pai “handsome returns” as well as for Ganesh and Meena. “Ganesh was a tiger. He’s a tough negotiator and half the time I just gave up on him and decided that I’d rather be on his side than the other,” recalls Pai.

Over the years, Pai and the Ganeshs have become good friends, and Aarin Capital has funded a couple of other startup ventures promoted by the couple, including online furniture etailer HomeLane. More recently, MEMG led a series A funding round in Grow Fit, a new wellness startup promoted by the Ganeshs.

“He [Pai] is very entrepreneur friendly,” says Ganesh. “He believes that as an investor, you don’t take 100 percent off the table, because the other guy [the entrepreneur] also needs to feel good.”

Says Natraj, “We don’t strike a brutally hard bargain every time there is a perceived opportunity. We do believe in a little more benevolent regime as far as founders are concerned and that probably comes from Ranjan’s own background.”

For entrepreneurs of Aarin Capital’s portfolio companies, the unwritten rule is that they can reach out to Pai anytime. From helping entrepreneurs with their go-to market strategy to picking up the phone and making the necessary introductions, Pai is their go-to investor. “I want to continue to be invested in the startup ecosystem because I enjoy it and hopefully there will be more success stories to talk about,” says Pai. And by success, he means growth for both—the mentor and the mentee.