Man has acquired an ascendancy over all other living things because he deployed his creativity to make tools. It is the imagining, development, and application of tools that made the homo sapien supreme 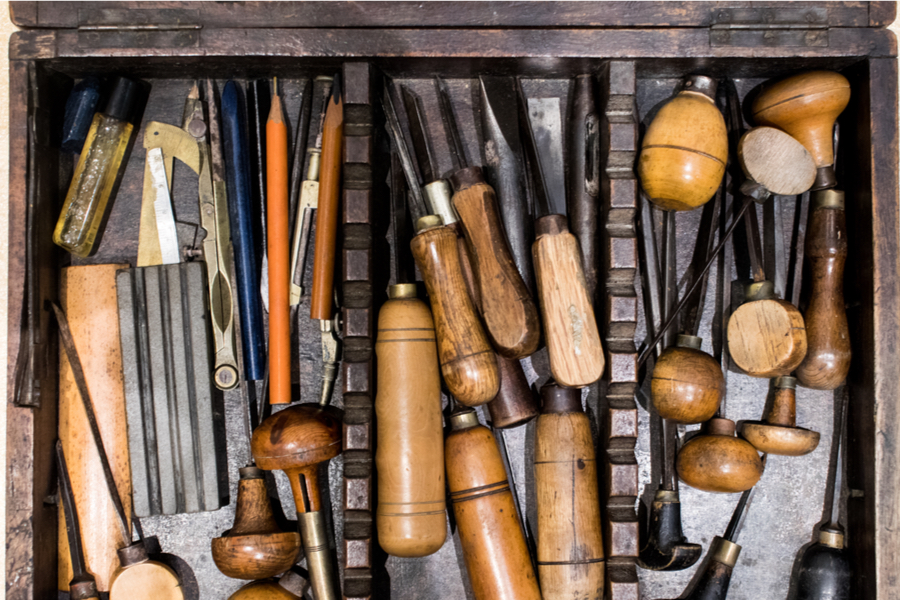 Self-awareness and the creative urge distinguish us from other creatures. To create something requires it to be envisioned first. Prometheus, the Greek god, had the magical power of being able to imagine the future by projecting a horizon of possibilities.

Man has acquired an ascendancy over all other living things because he deployed his creativity to make tools. It is the imagining, development and application of tools that made the homo sapien supreme.

Tool, machine, implement, instrument, appliance, utensil, device and gadget all mean 'piece of equipment for doing work'. A tool (the word first appeared in King Alfred's translation of De Consolatione Philosophiae c. 883 AD) is typically small and hand-held, performs a physical task, for example, culling, scraping, banging or moulding, and can be powered—a hammer is a tool and so is an electric drill.

An implement is usually a simple tool, particularly one used for agriculture: A rake or a spade is an implement. An instrument is either a delicate tool for skilled precision work or a measuring device: A scalpel and a thermometer are instruments. An appliance is usually an item of domestic or office equipment powered from the mains: Vacuum cleaners and juicers are appliances. A device is usually a piece of mechanical equipment ingeniously contrived for a stated purpose. A gadget is a small, often novel and electronic device that may form part of a piece of machinery, as in a car fitted with gadgets.

Paul Klee's studio was once described as an alchemist's lair, stuffed with the materials and instruments that he made and kept about him. These included homemade brushes, whittled reed pens, toothpicks and razor blades fastened to improvised handles and bent bits of wire to scrape, incise and abrade the compounded surfaces of his paintings.

"We make tools and as we evolve, our tools made us”

Not everyone is objective about using tools. Computers are to design as microwaves are to cooking, claimed Milton Glaser. "We make tools and as we evolve, our tools made us,” observed Steven Pinker, and he was right. In 1867 Karl Marx made much of the 500 different kinds of hammers produced in Birmingham, each adapted to fulfil a specific task. He also neatly defined machines as ‘knowledge objectified’ where machines had become an extension of man. Using tools shapes the life we live without tools. The camera is an instrument that teaches people how to see without a camera, Dorothea Lange explained pithily.

Creative geniuses have shown their calibre via inventions and discovery across fields. The Lunar Society of Birmingham was founded by Erasmus Darwin in the 1760s. This group of self-styled 'Lunaticks' formed a nucleus for the industrialisation of Britain, and between them, had a hand in the origin of almost every mechanism used in the technologies of today. Among the members were Josiah Wedgwood (pottery), William Small (who taught Thomas Jefferson), James Watt (steam engines), Joseph Priestley (oxygen), Benjamin Franklin (electricity), and James Keir (chemist).

Erasmus (grandfather of the more famous Charles Darwin) was a physician, poet, and inventor of a speaking machine, an artificial bird with flapping wings, a sun-operated device for opening cucumber frames, a horizontal windmill to grind colours, pumps, steam turbines, canal lifts, internal combustion engines, a compressed-air-powered ornithopter, a hydrogen-oxygen rocket motor and water closet that flushed when the door was opened to leave. He was also obsessed with the vision of a steam-driven 'fiery chariot' to replace the horse-drawn post-chaise. The society only met during the full moon as the ride home late at night was less dangerous.

Philosopher Ludwig Wittgenstein designed a house, fixtures and fittings. He also worked on a sewing machine and an aeroplane propeller. The Chinese designer Lu Pan, who lived some 2,500 years ago, is said to have designed the saw, drill, shovel, plane, hook, lock, and ladder. His wife is given credit for
inventing the umbrella.

The brush made of hair is attributed to General Meng T'ien, builder of the Great Wall (c. 210 BC) and Chai Lun is credited with inventing paper (107 AD). The Chinese also came up with the compass, gunpowder, paper, canal lock gates, cast iron, efficient animal harnesses, kites, type, porcelain, printing, sternpost rudders, and wheelbarrows. The Greek Daedalus also claims credit for the saw and drill, as well as the axe, plumb line, carpenter's glue, and making life-like automata. Gainsborough sometimes worked on his larger paintings with a six-foot brush made from a fishing rod.

The traditional quill pen was made from one of the first four wing feathers of a goose. The boomerang was perfected by Aborigines as a digging tool, cutting instrument, scaring birds, ritual dances, attack, and defence. Author Anthony Trollope (employee of the Post Office) was the inventor of the pillar box. Charles Babbage invented the great analytical engine, the forefather of the computer, the speedometer, cowcatcher, and life expectancy tables. During the 1940s, movie star Hedy Lamarr and composer George Antheil invented and patented a system to prevent the jamming of radio signals. They were posthumously inducted into the National Inventors Hall of Fame. You can see, that inventive genius is found everywhere.

The typewriter was patented in 1868 by Christopher Latham Sholes, and Mark Twain was the first to use one to write a book. The first patent for a typewriter was granted to William Burt of Detroit in the 1860s. The QWERTY keyboard, so-called for the six letters in the left top row, was designed so that people had to type slowly. To ensure this, the most common letters were scattered on the left side to confound the majority of right-handers. This strategy was to avoid adjacent keys jamming when struck in quick succession. In addition, salesmen could also acquire fluency in typing the letters TYPEWRITER as these occur in the top row of the keyboard.

Every discovery, by definition, is unpredictable. If it were predictable, it would not be a discovery. Creativity exposes unpredictable things to be discovered. It is a commonly held view that creativity is something some are born with and others are not. Actually, everybody has creative potential, but some seem able to access this more easily than others. Why? One major barrier is inhibition—not wanting to make a fool of oneself.

No one seems to know where creativity comes from or how it works. Poet AE Housman said he could no more define poetry than a terrier could define a rat. It has been defined as 'a leap across a chasm not bridgeable by reason'. However, when it comes down to where creativity operates, things get clearer. I think Arthur Koestler got it right when he said it was 'in the absurd, the useful, and the beautiful'.

Creativity is a compulsive human urge which demands more than ritual actions or routine responses and is only valid when one is trading beyond experience. The word 'Creativity' is frequently appropriated to enhance the mediocre or justify the mundane. Not new thoughts or magic moments, but instead just more patchwork and quick fixes.

In commercial life, creativity is often reduced to an activity in which the process becomes the product. 'I have nothing to say and I'm saying it,' declared John Cage. The truly creative act is something else. It produces something which never existed before. Whether of small consequence or amazing significance, it's usually generated by a spontaneous insight.

Of course, what appears to be a spontaneous thought may well have been a long time cooking in the unconscious. With practice, chutzpah, and a lot of luck, genuine, big insights can sometimes be generated. The trick is to focus the mind to create a combustion between intuition and experience.

George Nelson put it another way. 'What the creative act means', he wrote, 'is the sudden realisation that one has taken a lot of disconnected pieces and found a way of putting them together’. It was put in yet another way by Bernard Shaw, who in his late 80s was interviewed by a reporter who remarked that over the years a great many interesting things must have happened to him. 'No,' replied Shaw, 'Interesting things never happen to me. I happen to them.'

Per observation and experience, I am listing some key attributes of creativity:


Genius need not lie in thinking of a rocket to land on the moon. It shows up clearly in the everyday world and our normal lives. Take the ordinary pencil. The pencil developed from wrapping up lumps of plumbago (graphite) which were used to mark sheep. Incidentally, plumbago was also a cure for urinary disorders. The best plumbago came from the north of England and was exported to Europe. Can you imagine life without the humble pencil?

As his most famous statement had it, Klee’s pencil took a line for a walk. It snaked, looped, wandered off, and turned back on itself as it made its fitful journey through the worlds of his invention. A line can run dead straight, be wildly crooked, nervously wobbly, and make sensuous curves or aggressive angles. It can meander, wander, track or trace. Be a scribble, doodle, scratch, hatched, dashed, dribbled or trickled. It can be precise or fuzzy, hard or soft, firm or gentle, thin or thick. It can be smudged, smeared, erased—or just fade away. You can push a line, drag it, manipulate and manoeuvre it, make it delineate, accentuate, attenuate, or emphasise.

A line may be imperious or modest, authoritative or servile, brutal or seductive, passive or active, weak or strong, thick or thin.

A line is born, and dies, in a point.

Bye, till next week.

Note to readers: I'm intrigued by information such as that eight percent of the population is left-handed, that giraffes only sleep five minutes every twenty-four hours and so on which is useless but important! In the eighteenth century, German aristocrats kept glass-fronted cabinets that displayed curios. They called it Wunderkammern. This column is some such thing. In an unmarked field, it is easy to wander… I want to open windows to glimpse views rather than a whodunnit or a how-to-do-it. I have a licence to be long or short. To be structured or abrupt. This column has no beginning, middle or end. It's a journey without a destination. Simply speaking... 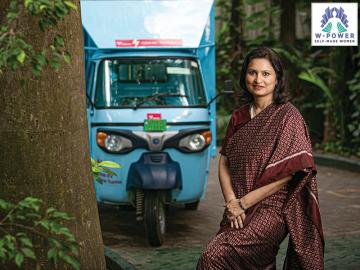