You have a chance to look at things from different angles if you manoeuvre the mind like that Australian bird that can fly upside-down and backwards. Turning problems on their head can frequently convert them into solutions 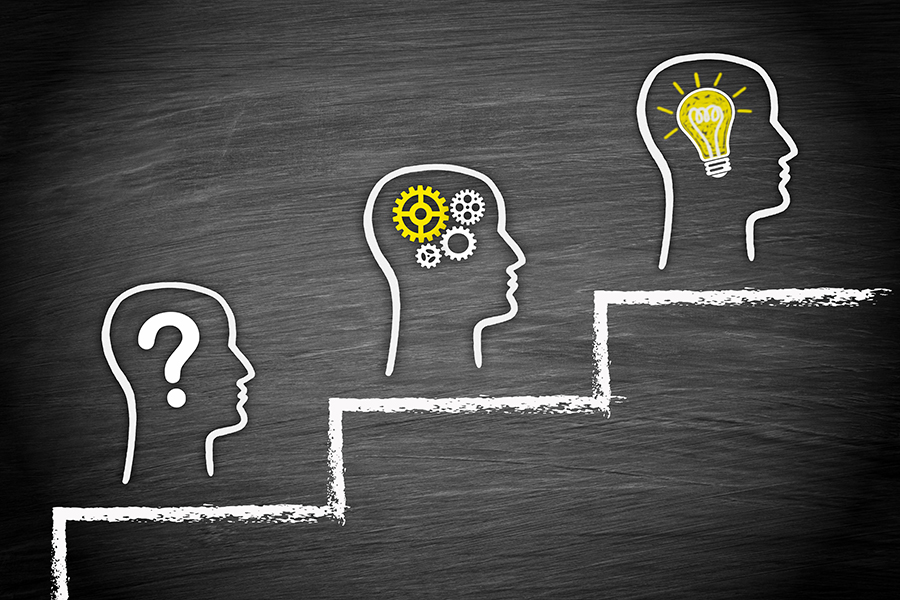 Since Aristotle, logical thinking has been exalted as the most effective way to use the mind, but it's not much help in generating new ideas. Image: Shutterstock

'All modern thought is permeated by the idea of thinking the unthinkable.' — Michel Foucault

According to cognitive psychologists, creativity is a special kind of problem-solving experience, which involves the activation of two opposite but complementary mental processes—convergent thinking and divergent thinking, as well as insight.

Merely defining creativity in ‘problem-solution’ terms is not the same as making it happen. Great industrial enterprises, much in need of brilliant invention, also need a robust continuing supply of smaller-scale creative ideas. The execution machinery then harnesses these ideas to a productive drive to turn the invention into a product.

Antony Jay wrote a biting commentary in his incisive book ‘Management and Machiavelli’ where he said grand problems and grand solutions are both useless without tackling the
smaller solutions needed to make things profitable.

It is similar to understanding problems in totality. 'A problem left to itself dries up or goes rotten. But fertilize a problem with a solution—you'll hatch out dozens,’ wrote NF Simpson.

It was in the 1930s that Chester Carlson married his production knowledge of photoconductivity, gained as a physicist, with his market knowledge of the demand for document copying gained as a patent lawyer to produce the idea of Xerography. He did the experiments privately in his own kitchen. But it was not until 1960 that Xeroxcopying started to revolutionise the world's offices and libraries. It was the creative group, under Joseph C. Wilson of the Haloid Corporation, that transformed a bright idea into a revolution and made Xeroxcopying one of the great industrial success stories of a decade. Making a commercial success of an idea takes doing and it demands iterative problem identification and solutions.

Often, great inventions can lie unexploited. The Byzantines invented clockwork but only used it for levitating the emperor to impress visitors. The Chinese invented gunpowder and used it largely for firework displays. The Tibetans discovered turbine movement and only exploited it for the rotation of prayer wheels. Charles Kettering had them in mind perhaps when he said, "It isn't that they can't see the solution, it is that they can't see the problem."

Arthur Koestler, in his book ‘The Act of Creation,’ explains creativeness, like humour, as the result of putting together two unconnected facts or ideas to form a single new idea. When Newton saw an apple fall in an orchard, gravitational theory and the attraction of masses became apparent to him. Gutenberg was baffled over ways of reproducing the written word, but while watching grapes being pressed, he saw the printing press as the answer.

'Discovery consists of seeing what everybody has seen and thinking what nobody has thought.' — Albert Szent-Györgyi.

The simplest route to a solution is usually the best. But the route to creativity is not merely inspiration but also laboured thought. Thinking is learned. 'A great many people think they are thinking when they are merely rearranging their prejudices,' wrote William James. In fact, these prejudices are often institutional, social and individual—in that order.

Cosmetic solutions are those which are expedient rather than effective. There is a joke about a man being fitted for a suit complaining that one of the shoulders wasn't cut properly. The tailor suggested he slightly turn his body. That improved it, but the back developed a bulge. Never mind, said the tailor, just lean forward a bit. This solved that, but the left trouser leg tended to rise. Keep your knee bent and it will look all right, said the tailor. The suit now fitted provided the man stood askew instead of upright, lent forward, and hobbled when he walked. Passing him in the street, a lady remarked to her companion how lucky the unfortunate man had found such a good tailor!

Of course, if the only tool is a key, then every problem is a lock. Modern management makes us start with assumptions. But assumptions inhibit shaking out answers. This riddle is only a riddle because of an assumption. A man lives in an apartment on the twentieth floor. Every morning, he gets in the elevator and pushes the ground floor button, is taken down, gets out, and goes to work. In the evening, he returns, enters the elevator and pushes the button for the tenth floor. He gets out and walks up the stairs to the twentieth. Why, on returning home, doesn't he ride straight up to his apartment? Maybe he's a half-hearted fitness freak? Maybe he isn't. Maybe he is merely a midget. 'The irrational is not necessarily unreasonable,'  said Sir Lewis Namier, and our problems are often unsolved because our approach never defies conventional assumptions.

Trying to solve most problems is like trying to assemble a jigsaw puzzle without first seeing the picture on the box. One knows a solution exists, providing all the bits and pieces are put together correctly. 'A problem well stated is a problem half solved,’ said G.K. Chesterton. So having a picture of what we are trying to solve for will get us to the solution faster.

The architect of the Duomo in Florence died without leaving plans for constructing the enormous dome. That left a quandary as no one could figure out how to do it, so the Duomo was built without a dome. A hundred years later, someone came across an early document that described how they built the dome of the Pantheon in ancient Rome by filling the space between the walls with earth. A neat piece of lateral thinking was finessed by scattering coins in the earth, so once the building was finished the enthusiastic populace was invited to carry away the earth and rubble. For some reason, the authorities didn't adopt this scheme and held a competition instead. Brunelleschi came up with the answer by tapping an egg on a table, so it dented, and then stood it up on end. He got the job.

The Santa Trinita bridge in Florence, dynamited during World War II, was reconstructed from photographs and Ammannati's original drawings. One difficulty was that the curves of the arches didn't conform to standard geometry. Some speculated that they were catenary curves, the shapes produced by the loop of chain, others that they derived from the shape of a violin. Finally, someone suggested they were drawn freehand by someone brighter than Ammannati. They were right. When Cosimo de'Medici commissioned the bridge, he was also talking with Michelangelo on other matters.

Ammannati simply executed the solution. The original design of the triple curves can be found carved in the Medici tombs on Michelangelo's sarcophagi of Night and Day, Twilight and Dawn. There is a juicy, though possibly false, quote of Michelangelo’s
comment on seeing the sculpture of Neptune in the Piazza Della Signoria in Florence `Ammannato, Ammannato, che bel marmo hai rovinato.' (Oh Ammannato, what a beautiful piece of marble you've ruined.')

The other issue in problem-solving in management is that we explain and define problems and solutions in words. The temptation to equate thinking with language is because words are more palpable than thoughts.

Thinking is hard work; few engage in it. This is how it can be broadly categorised:

This is fluid and undirected; it wanders and meanders, and is subject to repetition and generalisations. The sort of thinking that goes on when we don't think we're thinking.

This selects a route and follows it to its conclusion. With this approach, the solution is largely predetermined. So if you head off in the wrong direction, you can end up painting yourself into a corner.

This confines thoughts to operate within given rules. Therefore solutions are limited by the possibilities available within the pattern.

This is purposeful in intent without a specific aim. Freewheeling so it can reveal solutions that might have been overlooked in other approaches.

Most of the time, our thinking jumps around alternating and mixing between reasoning which adheres to measurable responses and imagining, which allows unpredictable currents to play around with data.

‘For hundreds of years, we have believed that if something is logical in hindsight, then logic should have been enough to get the idea in the first place. This is complete and total
rubbish,' wrote Edward de Bono in I Am Right You Are Wrong.

Since Aristotle, logical thinking has been exalted as the most effective way to use the mind, but it's not much help in generating new ideas. You have a chance to look at things from different angles if you manoeuvre the mind like that Australian bird that can fly upside-down and backwards. Turning problems on their head can frequently convert them into solutions.

At the height of disillusionment over Vietnam, one bright senator suggested the best way for America to get out of the mess was to declare victory and withdraw immediately.

A man on learning his son had lost his credit card, didn't trouble to report the loss because the thief didn't spend as much as he did.

The Nijo Castle in Japan is celebrated for its Nightingale Floor. This is cunningly constructed so that even with the lightest step the boards emit a squeak—to warn of the approach of assassins.

The Shilla kings of the ancient Korean empire were buried in tombs covered with loose rocks and stones which created huge mounds. When robbers tried to dig a hole, the space was immediately filled with rubble.

Zugzwang is a chess term that describes how black, owing to whites' extra move in starting the game, is forced into playing a losing move. Like this, an obligation to act without thinking is a serious, decisive disadvantage.

A potzer is a chess term for a weak player with an inflated ego. In thinking creatively to identify problems and imagine solutions, most of us are potzers and life has us Zugswanged most of the time.

Note to readers: I'm intrigued by information such as that eight percent of the population is left-handed, that giraffes only sleep five minutes every twenty-four hours and so on which is useless but important! In the eighteenth century, German aristocrats kept glass-fronted cabinets that displayed curios. They called it Wunderkammern. This column is some such thing. In an unmarked field, it is easy to wander… I want to open windows to glimpse views rather than a whodunnit or a
how-to-do-it. I have a licence to be long or short. To be structured or abrupt. This column has no beginning, middle or end. It's a journey without a destination. Simply speaking...