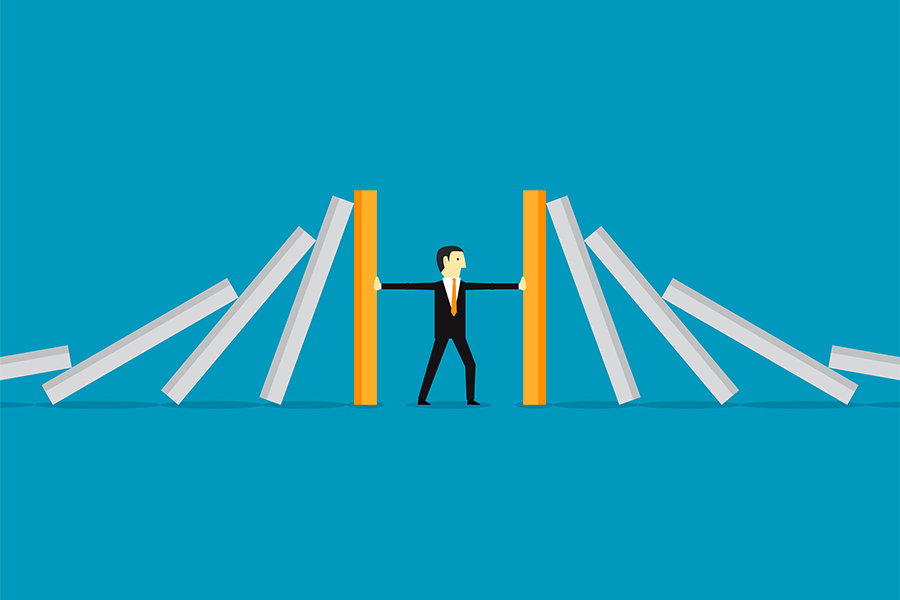 Struggling firms can’t free up collateral for hedging because it is otherwise occupied – in a downturn, it is likely already being leveraged to keep a firm’s operations afloat Image: Shutterstock

Corporate finance veterans know that hedging, a strategy to offset potential losses, is essential to protecting their firms when facing a decline in cash flow or net worth.

Ironically, when firms are constrained and could most benefit from the insurance hedging provides, they also lack the resources to do so, according to research from Adriano Rampini, a finance professor at Duke University’s Fuqua School of Business.

Struggling firms can’t free up collateral for hedging because it is otherwise occupied – in a downturn, it is likely already being leveraged to keep a firm’s operations afloat, explained Rampini, who has co-authored several papers on this topic with finance professor S. “Vish” Viswanathan. Rampini discussed their research live on Fuqua’s LinkedIn page.

"You might think that the firms that are more constrained can least afford to bear these various risks, but in fact, something makes them choose to forego this type of financial hedging,” Rampini said. “The paradox is that a firm’s financial constraints are both the reason they should be hedging and the reason why they don’t do it.”

Rampini and colleagues have examined hedging in many contexts, from how people use household insurance policies to how airlines hedge fuel expenses. Their insights have prompted new questions about the foundations of risk management theory. Using data from airlines, the authors also developed a model to predict when a financially constrained firm is likely to abandon hedging and use its resources to finance investment or to avoid downsizing and focus on staying operable.

Hedging on a small scale

A simple way of thinking about hedging is to look at household insurance, Rampini said.

Of course, when someone’s income decreases, they are more financially constrained and need protection against an unexpected bill that could drain their bank accounts, Rampini explained. This is the paradox.

"It’s not that they don’t understand the benefits of insurance,” he said. “It’s because insurance requires a premium today – an up-front cost that may or may not pay off tomorrow.”

This paradox has spurred innovations in insurance, Rampini said – disruptive changes known as insurtech. Some of these innovations consider the paradox faced by those who are financially constrained – perhaps they can’t spend $200 insuring their car this month because they need a repair, Rampini explained.

"But what if I can buy car insurance by the day, or perhaps make more frequent payments? If paying up front for a month is a reason people may go uninsured, then perhaps these are solutions that can actually help.”

Just like households when money is tight, research by Rampini found that airlines abandon their “insurance” – hedging against jet fuel prices – when they become financially constrained.

The researchers analyzed financial data airlines filed with the U.S. Securities and Exchange Commission from 1996 to 2009, in which the firms disclose what fraction of the next year’s expected fuel expenses they have hedged, as described in the paper “Dynamic Risk Management.”

The filings showed, on average, airlines hedged about 20 percent of the following year’s fuel expenses. The higher a company’s net worth, the more it hedged, Rampini said.

However, a main obstacle to hedging was many airlines’ use of collateral – notably, its aircraft – for financing. Once promised to a financing counterparty, that collateral couldn’t be used to hedge, Rampini said.

From data from 10 airlines that faced downturns during the study period, the researchers identified a pattern: about two years before the airlines become financially constrained, the firm would retreat from hedging expected fuel expenses.

At first the decline was slight – from 30% to 25% of the anticipated total expense. That figure dwindled to 5% as the firm faced major constraints, and took about two years, on average, for the firm to increase its hedging back to 20% of total expected fuel expenses, the researchers found.

"It actually is a bit shocking because airlines are pretty large,” Rampini said. “So, even at pretty large firms, actually, risk management can be quite limited, suggesting that the cost of this risk management is reasonably high, even for large-sized firms that we think of as being pretty well capitalized.”

Investigating the underlying reasons firms withdraw from hedging could help protect firms, and subsequently, to protect workers and the economy at large, Rampini said.

"If we can better understand what drives the symptoms, so to speak, we can get closer to developing the right treatments or policies to improve matters,” he said.

Tweets by @forbesindia
Does TikTok plan to go head to head with Spotify?
We like buying brands, especially in the OTC space: Nandini Piramal