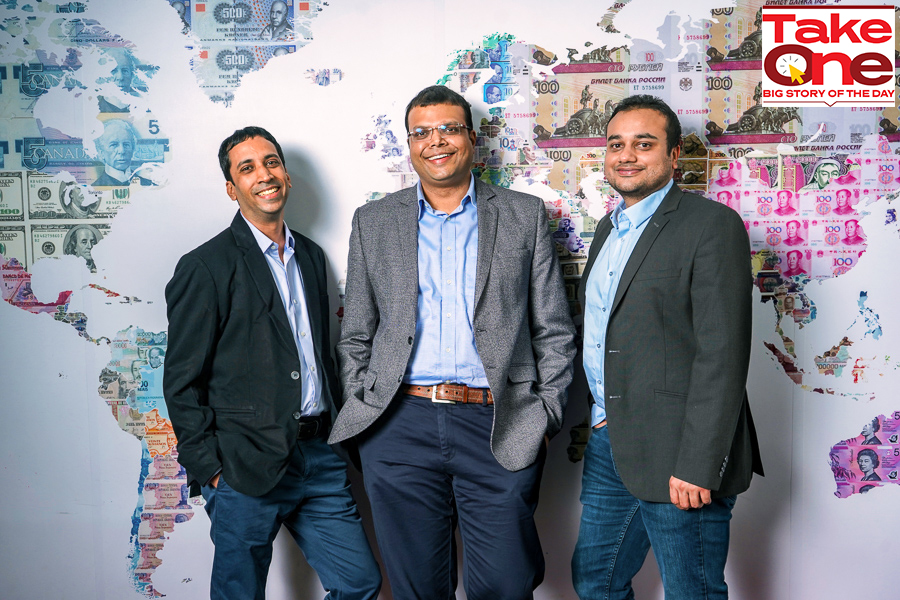 Fintech veterans Nitin Gupta, Prateek Jindal, and Laxmikant Vyas may have started out on different paths, but their journeys brought them together to the same destination–Uni, a fintech startup launched in October last year that provides new-age credit cards.

Uni’s flagship product launched this June, the ‘Pay 1/3rd’ card, automatically splits transactions into three parts at no extra cost. Customers can also pay in full in return for cashback. The idea of the card, which targets short-term liquidity, was the result of a survey that gave co-founder and CEO Gupta an insight into consumer spending habits. “We conducted a survey among the employees in the firm I was working at previously, where we found that 40 percent employees borrowed money from friends or family. That is when it dawned upon us that once in a while, most users face short liquidity crisis,” says Gupta, who wants to make credit products accessible and democratic.

The co-founders have previous experience in building credit products, with Gupta, Jindal and Vyas having worked with PayU, Ola Financial Services and Bajaj Finance respectively. The Bengaluru-based startup, backed by Lightspeed Ventures and Accel India, raised a seed round of around $18.5 million [Rs135 crore] in October 2020, while still in stealth mode. Uni is present across 47 cities in India including Delhi, Mumbai, Hyderabad, Pune, Chennai, Kolkata, Ahmedabad, Lucknow, and Jaipur. The Pay 1/3rd is a physical and digital card powered by Visa.

“With over 220 million [22 crore] credit eligible consumers, there is great potential for expanding access to credit through the adoption of innovative pay later products, especially amongst a rapidly digitising consumer base,” says TR Ramachandran, group country manager, India and South Asia, Visa.

Jindal, who is also the chief product officer at Uni, says that the buy now pay later (BNPL) trend is picking up in India. “People want more options to plan their finances better. Millennials and GenZ want to make things happen, not wait for them to happen. If there is a sale on the phone of their choice today, they want to be able to buy it and have options with payment modes. This format [BNPL] helps them plan better and solve for short-term liquidity crunches.”

In October this year, Uni saw more than 100 percent increase in transaction value. “We saw 3x growth in spends during this festive season on ecommerce platforms. Since August, transactions have been steadily growing and the current transaction value is Rs 120 crore in monthly disbursals, with a month-on-month growth of 40 percent,” says Gupta, who is a graduate of the Indian Institute of Technology (IIT) Delhi and Indian Institute of Management (IIM) Ahmedabad.

​The company generates revenue from both merchants and customers. Uni works on the Visa network and charges sellers as per Visa’s track rate, which varies as per transaction rates. From customers who convert their bills into longer tenure EMI or instalments, the company charges interest which ranges between 14-18 percent. A part of the company’s revenue also comes from late fees that is payable by customers if they miss the repayment on time. “In Pay 1/3rd, the minimum due amount has to be paid in every billing cycle, or the borrower will have to pay late fee that is decided based on the slab”, says Gupta.

To manage funds that Uni disburses, the company maintains a revenue sharing relationship with their partners at banks and NBFCs. Commenting on the idea of bringing down costs of funds by becoming an NBFC, Gupta says, “Being an NBFC is now becoming more important because of regulatory reasons than for costs of funds.” Although costs of funds at banks are lower, Gupta believes an innovative business model, technology, and superior user experience give the company an edge over banks.

Uni wants its Pay 1/3rd card to stand out in the competitive buy now pay later landscape. Banking on being both a physical as well as a digital card, Pay 1/3rd is looking to reach millions of merchants with a credit limit between Rs20,000 and Rs6 lakh. “Most pay later products in the market are digital and not physical cards. These players are also merchant dependent and only work within a merchant network and the credit lines are lower. That is where Uni’s Pay 1/3rd is different,” says Gupta.

In the market, players like LazyPay and Ola Money provide one-click convenience for high frequency of transactions, while others like Bajaj Finance and ZestMoney offer affordability in transactions. Uni provides customers with flexibility on a transaction with user discretion to either split payments into three parts or pay in the same month for a 1 percent cashback. This choice is on a transaction level.

Vyas reiterates that the core idea behind the Uni Pay 1/3rd card is to help customers manage short-term money needs while giving them the flexibility to earn rewards and cashbacks. “It is the longest free credit period card in the market, and questions traditional ethos around credit cards that penalise customers for short term fund requirements,” he says. Uni’s Pay 1/3rd comes with no joining fees and provides customers with long EMI plans starting from six months to over 18

Although the BNPL trend is catching up, it comes with its downside and risks. Based on the nature of the transaction, consumers can easily get trapped into the idea of overspending and impulse buying. Since consumers will have a chance to pay only one-third of the amount at the moment, they might spend more, leading to larger purchase amounts, which is a win for the merchants, say experts.

Mihir Gandhi, partner and leader, payments transformation at PwC India, says the collection of loans can prove to be an important and tough task for loan providers. “Any company offering BNPL services will need to have a robust collection mechanism in place do the recoveries of the loans. Giving the loan is the easy part, but the collections should be to the focus area.”

Uni is planning to launch a ‘Direct bank’ feature in Pay 1/3rd to enable consumers to take their credit line directly into their or anyone else’s bank account, without costs.

The startup will also introduce affordable EMI plans if consumers need longer repayment tenures, ranging from six to over 18 months, and an in-app lifestyle store for consumers to redeem reward points. That apart, Uni has plans to launch a credit card over the next few months. “Pay 1/3rd is the first product in our kitty. We will operate in this credit card and pay later world only and keep coming up with new and different value propositions. This will be very relevant to certain customer segments, much more relevant than what the existing products can do”, believes Gupta.

Tweets by @forbesindia
Rasika Dugal: When chaos is your fuel
Photo Of The Day: Rest in peace