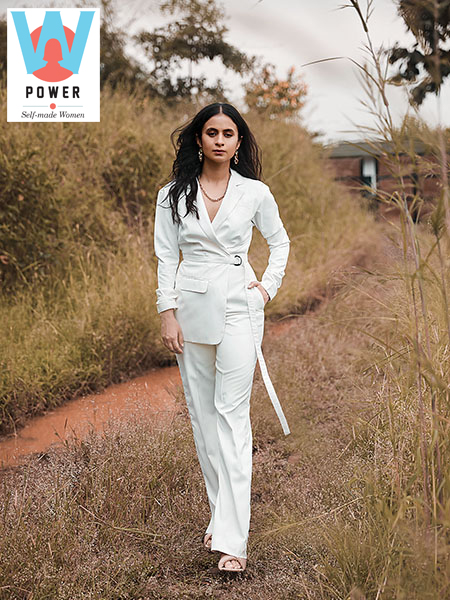 After completing her two-year acting diploma course at the Film and Television Institute of India (FTII) in Pune, Rasika Dugal would feel a sense of emptiness between 6 pm and 9 pm. She did not know what those hours looked like outside of the institute campus. At FTII, she would be immersed in watching world cinema at that time and absorbing its nuances.

“We had film screenings every day. There was so much exposure to cinema. Living in a hostel at FTII was like living on a film set,” says Dugal, who aspired to become a doctor, but became an actor instead.

In the past three years, she has benefited from the popularity of streaming platforms and carved a niche for herself with a variety of roles. She admits that she is in the best phase of her career, but hopes that it only gets better from here. “There has been a lot of work… not only continuous work but also an interesting variety in the roles that I have done. What I am also grateful for is that it has been quality work,” says the actor, who has been acclaimed for her performances in Manto (2018), Mirzapur (2018), Made in Heaven (2019), Delhi Crime (2019) and A Suitable Boy (2021).

The acceptance from the audience is both rewarding and reassuring for the actor, who has been a part of the industry for over a decade. In the year preceding the filming of Manto, Dugal was almost signed for five films, but missed out on them as the producers did not find her saleable enough. “I needed one person to trust me, and Nandita Das was that person. She fought with every producer to have me on board. Manto saved me from getting into a slump,” says the Jamshedpur-born actor, who completed her bachelor’s in science from Lady Shri Ram College in New Delhi and a postgraduate diploma in social communications media from Mumbai’s Sophia College.

Das had seen Dugal in Qissa (2015) and had found her amazing. She had the actor in mind to play Saadat Hasan Manto’s wife Safia from the time she was writing the film. “To Rasika’s surprise, I did not even audition her. She was my first and only choice,” says Das, who wrote and directed Manto. “Rasika was brilliant in melding Safia’s gentle and dignified nature with her inner angst and pain. Everyone loved how she played it. Rasika is special, both on and off set. She is one of the most professional, accommodative and sensitive actors that I have worked with.” 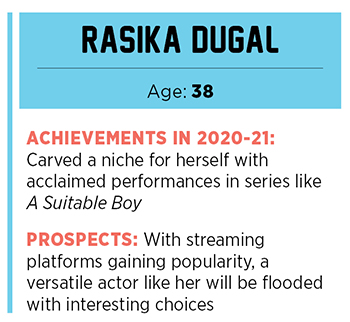 A similar leap of faith was shown by Karan Anshuman, who co-wrote and co-directed the web series Mirzapur. When Dugal got to know that he was working on the action-crime thriller, she called him to say that she would like to be a part of it. “Mirzapur was a turning point… I had never imagined that I could reach such a wide audience,” says the actor, who has starred in indie flicks like Kshay (2011) and short films such as Chutney (2016) and The School Bag (2017). “I would love to take credit for making extremely smart choices. But the fact is when I got Mirzapur, I didn’t have any other work. It’s not that my diary was full.”

Anshuman says he has been friends with Dugal for a long time. “But I never imagined her doing something like this. I always knew she was great, but she blew me away with her performance as Beena Tripathi in Mirzapur. She comes well-prepared and is a one-take wonder,” he says.

When she joined FTII, Dugal was surprised to know that people came to the institute in the hope of becoming a star. “I was so naïve,” she says. Today, streaming platforms have dismantled the star system and given a fresh lease of life to talented actors like her. “I think it is very healthy and I hope it remains like this. If only five or six people rule the roost, everything becomes boring. If many artistes are doing well, then even those who are successful are on their toes. For instance, I have a lot of work today, but I don’t feel complacent,” says Dugal. “Streaming services have busted the myth that audiences are not ready for intelligent content.”

The actor says there are two deciding factors for her to take on work: The writing and the people. “Our job is to be vulnerable and the people we are working with have to respect that vulnerability and know how to nurture it,” says Dugal, 38, who is currently shooting for a web series for which she is learning a new sport. “I love the energy of a set. The chaos of a set fuels me,” she says while explaining the joy of returning to a set after the pandemic had brought shooting to a halt during the two waves of Covid-19.

Dugal, who feels inspired by the women she has had the opportunity to work with, among other people, is not one to have goals, but her directors predict a bright future for her. “I am certain that she will grow in her talent and stature in the years to come, and will be one of the most versatile actors of our times,” says Das. Anshuman agrees. “She is a powerhouse… she can do whatever she wants. She deserved an Oscar for Kshay, so I hope she gets the Oscar one day.”