Post-IPO, stocks tank for Policybazaar's parent but the road ahead may not be all bumpy

Prices go down as owners sell shares, but experts say a turnaround is inevitable as markets stabilise 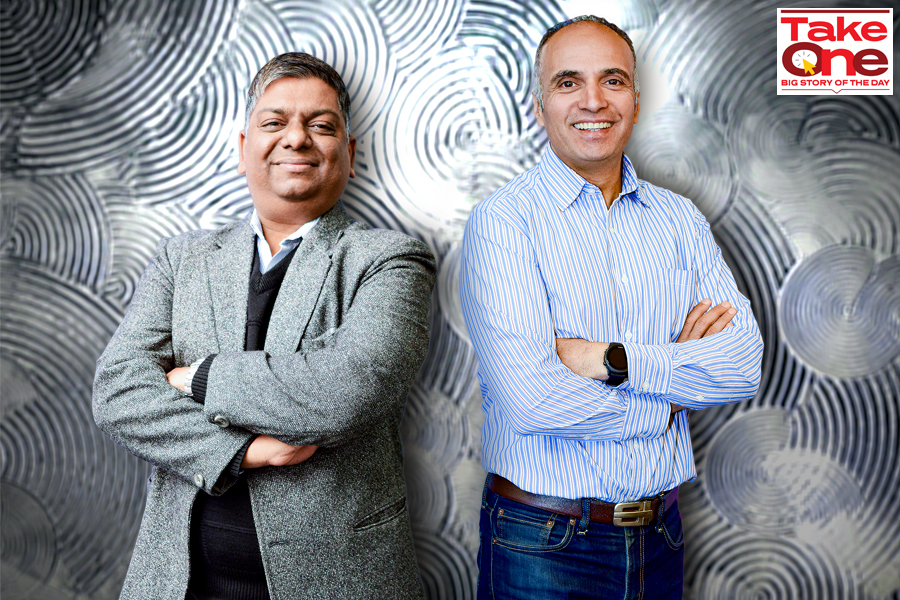 L to R: Alok Bansal and Yashish Dahiya of Policybazaar; Image: Amit Verma
When Yashish Dahiya first met Sanjeev Bikhchandani, the founder and executive vice chairman of Info Edge, in 2008, regarding the setting up of Policybazaar, he said, “I’m willing to bet that you’re paying 60 percent higher for your car insurance than you need to.” Bikhchandani was shocked. He responded saying, “How can there be so much variation?”

Dahiya presented him with quotes from eight insurance companies to support his statement. Bikhchandani says, “Sure enough, I was paying 60 percent more.” Info Edge was one of the early investors in PB Fintech—back then, Policybazaar. Why bet on the startup at a time when no one believed in the model? “The company’s hugely compelling value proposition, high quality team and its first mover advantage,” recalls Bikhchandani.

Dahiya, along with Alok Bansal and Avaneesh Nirjar, launched Policybazaar in July 2008, as an insurance comparison website. They started by focussing on motor insurance and later moved on to health and life insurance when the founders realised those were the real problems the middle class was facing. “Since it was not a ‘top of the mind’ product, that made it conducive for research and purchase online,” says Bansal, co-founder and CFO.

In the first two years, no one believed in Policybazaar’s model, given that most companies had to put in a lot of effort in selling insurance, says Dahiya, co-founder and CEO. He recalls conversations with people in the insurance industry: “You are telling me that customers are going to come to your website to buy insurance? That doesn’t happen. Customers don’t engage with this product, it is an absolutely distribution controlled product.” Few companies entertained Policybazaar back in the day, Dahiya says, “We would introduce them to insurance companies and then they would go physically, and convert them into customers.” It was a lead generation business model for the first three years, where they would spend Re 1, and earn only 5 paise out of it.

Cut to 2011. This was when the sales model—which was their original plan—finally started working. They had started earning Rs 70-80 for every Rs 100 that was being spent. In 2012, the sales model expanded 100x in a year. “This is where the real story of Policybazaar started,” says Dahiya. The team got rid of the lead generation revenue model, and invested heavily in the sales model, which meant profits took a hit in 2012. “Yashish used to tell us that the quality of revenue, and not just the revenue, is very important. We decided to focus on the model, which was right, and not the one that can make us money, so we looked at the long-term benefits instead of short-term,” says Bansal.

Paisabazaar—an online marketplace for all kinds of banking products—was never meant to be another business. Policybazaar was always supposed to have loans, investments, credit cards and all other financial services. “But,” says Dahiya, “at some point, a regulation came out, that if you are an insurance comparison website, you cannot do anything other financial product.” This regulation forced them to shut down this part of the business, which was about 5-10 percent of their revenue. “We decided to start another brand, so we can continue building this business,” adds Dahiya. Interestingly, as per regulations, Paisabazaar or any other financial services business, can sell insurance online.

On November 15, PB Fintech, the parent company of Policybazaar and Paisabazaar, was listed at Rs 1,150 per share on the BSE and NSE, at a 17.35 percent premium from its offer price of Rs 980. But since then, evidently a lot has changed. 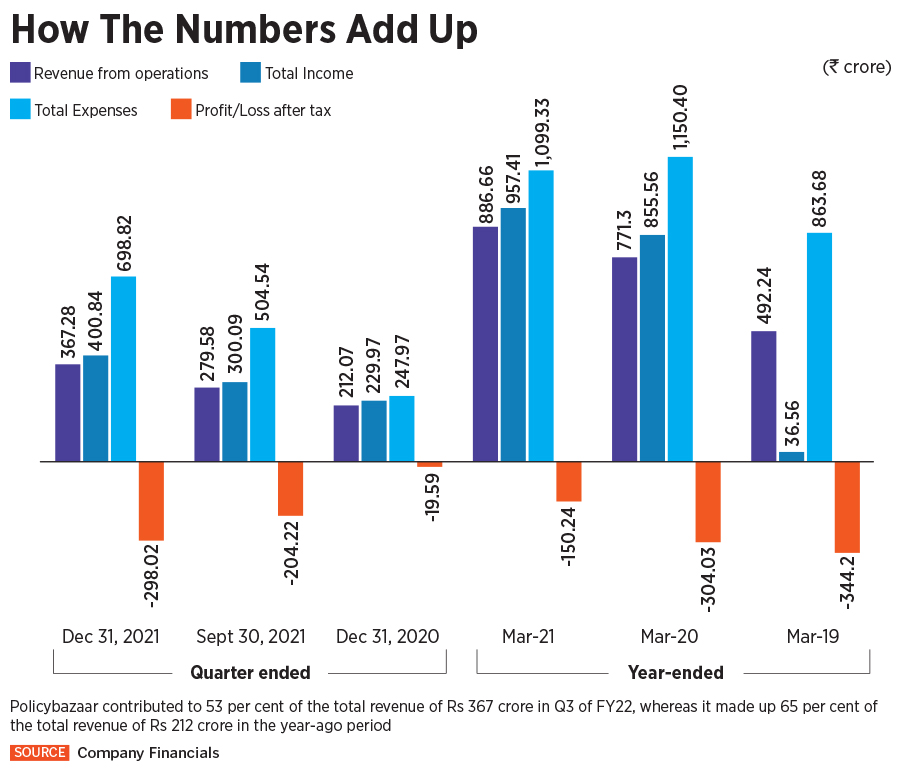 In the last couple of weeks, a lot has happened for PB Fintech. Most recently, the co-founders are selling a 2.4 percent stake in the company. As per its Q3FY22 results, the company has incurred a consolidated loss of Rs 298 crore and a clutch of its the anchor investors is exiting.

On February 10, the company stated in a regulatory filing that co-founders Yashish Dahiya and Alok Bansal will be selling shares worth 2.4 percent of the company’s capital base in a block deal worth $130 million to $140 million (about Rs 1,000 crore). With Dahiya selling 70 lakh shares and Bansal selling 38.9 lakh shares, their cumulative stake will reduce to 8.01 percent on a fully diluted basis from 10.33 percent currently. Reason? The release stated, “The proceeds from the sale are likely to be used by the founders to make tax payments towards the ESOPs that are due.”

According to reports, the block deal that took place on February 11 involved around 1.4 percent stake worth Rs 534 crore at average Rs 822 a share. The huge deal—which saw around 64.7 lakh shares changing hands—led to PB Fintech’s stock price dropping by close to 10 percent. Forbes India reached out to PB Fintech for a comment on these recent developments, but they declined.

The block deal took place soon after the Q3FY22 results that stated an increase in revenue by 73 percent to Rs 367 crore, from Rs 212 crore in the corresponding quarter of the previous fiscal. However, the consolidated loss the same time period was Rs 298 crore as opposed to a loss of Rs 19.58 crore in the year-ago period.

Commenting on the results, Dahiya stated, “Scale is critical to the success of any marketplace. We are currently at an ARR of over Rs 8,000 crore which is a growth of 60 percent YoY. We are now growing at scale. Margins in our existing businesses were maintained at 40 percent. Renewal revenue is at an ARR of over Rs 210 crore, the renewal book operates at 90 percent contribution margin and will be the biggest driver of our long-term profitability.” While the company’s insurance premiums (through Policybazaar) grew by 68 percent to Rs 1,796 crore in Q3, credit disbursals (through Paisabazaar) rose 94 percent to Rs 1,926 crore.

Secondly, PB Fintech has spent around Rs 503 crore (Rs 236 crore in the last quarter) on advertising, compared to Rs 253 crore in 2020. “For a category like this, which is not very impulsive, it’s not as easy. Creating a website or a mobile application doesn’t mean customers will come and start buying, you need to invest in customer acquisition,” says Bansal.

Analysts are positive to see this change in the near future, and so are the founders. Bansal adds, “Policybazaar premium has grown 45x in the last eight years and Paisabazaar disbursals are 46x higher over the last seven years. Given the low levels of insurance and credit penetration in the country and increased digitisation, we are confident of our future growth and profitability prospects.”

Dahiya believes there is a huge difference—especially when it comes to profitability—between internet and non-internet businesses. He explains, “There is a higher gross margin in internet businesses, because with scale your operating costs are low compared to your revenue. For a traditional business, it might a 10 percent margin business, for an internet player it could be a 50-60 percent margin. But at the same time, Internet businesses need more investment in creating the brand and developing the technology before the business actually takes off.” This means if revenue doubles, profitability doesn’t necessarily double, whereas, in a traditional business, though gross margins are low, there isn’t as much investment in technology, says Dahiya.

On December 13, the mandatory one-month lock-in of anchor investors expired for PB Fintech, leading to the stock price dropping. Ahead of the IPO, PB Fintech on October 29 finalised an allocation of 2,62,18,079 equity shares to anchor investors at an allocation price of Rs 980 per share, aggregating to Rs 2,569.37 crore. As on February 21, the share price is been down by 34.9 percent from the listing price, which was Rs 1,150 per share in November.

However, analysts believe this is only a temporary dip. Singhal of the GCL Group says, “The falling stock price could be due to many reasons, like the overall market which is bearish, anchor investors lock-in period ending and results not in line. But the share price will stabilise as the market starts recovering.” 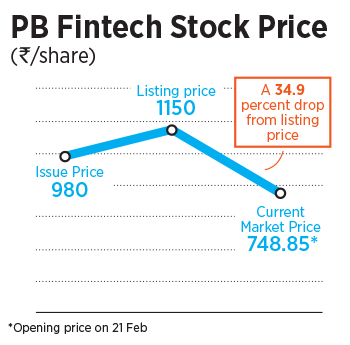 The digital insurance marketplace’s market share as of FY20 was 93.4 percent, based on the number of policies sold through online insurance distribution platforms. It has partnered with 48 insurers, and has 51.1 million registered consumers on its platform. It has sold 20.7 million policies on its platform and has 10 million unique transacting customers.

According to ICICI Securities, in FY20, India had a Rs 7.6 lakh crore insurance industry, measured in terms of total premium and is expected to grow at a 17.8 percent CAGR to Rs 39 lakh crore by FY30. “There is huge potential for growth in the insurtech segment. Like we’ve seen with fintech and how it has complimented financial services, similarly insurtech companies should and are complimenting insurance companies as well. The sector is crucial to the growth of insurance in India,” says Bahroze Kamdin, partner, Deloitte.

On the other hand, though PB Fintech’s digital consumer credit marketplace Paisabazaar accounts for a lesser percent of the company’s total revenue, it hopes to grow fast soon. In FY21, it held a 53.7 percent market share based on disbursals. Bansal reckons, “Its [Paisabazaar] moats are still not as established. The consumer brand recall is not that high, the service element in lending is also not as high. Some of these things have to be put in place for Paisabazaar to grow further.”

As part of its growth plans, it recently acquired Gurugram-based loan marketplace MyLoanCare for Rs 40.41 crore. The company maintains it will be keen to look at acquisitions that help with capability enhancement for all its ventures.

Post the IPO, Policybazaar is hoping to expand further in the offline space. So far they have 15 fully operational stores across India. Dahiya clarifies, “These are all small stores and more of service centres. They are to give customers confidence that we are in your city.” With Paisabazaar though, they have no plans to move into the offline space.

In 2018, the company entered the health tech space with Docprime.com. “We think the health industry is going to have a UPI moment. So, we are betting on the ‘National Digital Health Mission’. In December 2021, they launched the Docprime health locker integrated with Ayushman Bharat Digital Mission. “Docprime is not a revenue-focussed entity. We don’t have an intent to build revenue in it... no one can say what the eventual future lies, but if you talk about the mid-term we have no revenue plan,” reckons Dahiya.

Dahiya and Bansal are strong believers of not dipping into their past to make decisions for the future. They hope to continue running experiments that they believe are an important part of the company’s future. When asked about the company’s road to profitability, Dahiya says, “I know we aren’t supposed to make forward statements, but very soon we'll be profitable. We will naturally turn profitable and grow as well... by how much, we’ll keep that a surprise."