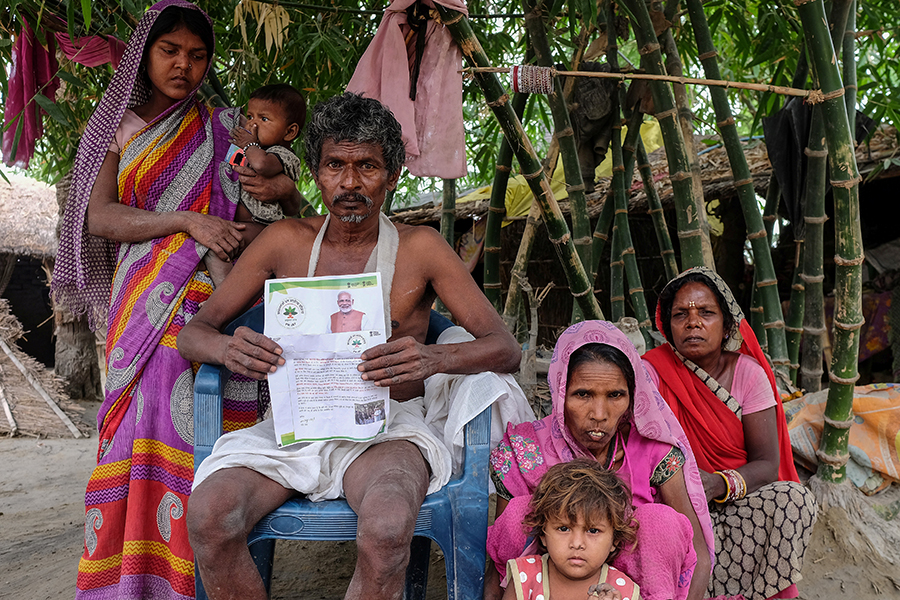 Nand Lal Mandhji, holds a letter about the Ayushman Bharat Medical Scheme, known as 'Modicare' as he sits outside his home with his family in Marwan village in the eastern state of Bihar, India.
Image: Alasdair Pal / Reuters

The Ayushman Bharat - Pradhan Mantri Jan Arogya Yojana (AB-PMJAY) was launched in India by Prime Minister Narendra Modi on September 23, 2018. The scheme aims to provide free access to healthcare to 500 million poor and marginalised population in the country, and is touted as the world’s largest government-sponsored healthcare programme.

AB-PMJAY is the flagship health insurance scheme which promises health insurance of up to Rs 5 lakh per family, per year to the beneficiaries—100 million poor families, from weaker and deprived sections. The target beneficiaries of the scheme are economically backward people in rural (8.03 crore) and urban areas (2.33 crore) identified based on the Socio-Economic Caste Census 2011. The eligible Ayushman Bharat card holders can claim cashless and paperless access to healthcare services across the empanelled public and private hospitals (nearly 20,000-plus) that have registered to offer the Ayushman Bharat Scheme.

The health insurance includes pre- and post-hospitalisation expenses, and cost of scheme implementation is shared between central and state governments (in 60:40 ratio). There is no premium that needs to be paid by the beneficiaries, and one of the key features of the scheme is the portability of benefits across the country. Beneficiaries of the scheme can avail secondary and tertiary care (for over 1,400 procedures) in the empanelled public and private hospitals only.

AB-PMJAY: A Reality Check
One of the primary objectives of this scheme is to decrease the out-of-pocket (OOP) expenditure on health in India—which is a staggering 70 percent, the highest globally. Not to mention, such high OOP pushes nearly 60 million Indians into poverty each year.

Contrary to the intended objective, findings from multiple research studies suggest that insurance schemes for the poor in India have failed to provide the much-needed relief, with OOP figures higher for those using insurance schemes, compared to those who do not. Predominant reasons being shoddy implementation, lack of infrastructure and corruption.

Next, in terms of costing, there is a pre-determined package system in which the upper limit of the treatment cost is fixed to ensure that hospitals don’t mint money from insurance schemes. However, stories abound with hospitals using the scheme to their advantage. Very often, a beneficiary ends up being charged over and above the ‘approved’ amount for a given package. This not only leads to heightened information asymmetry between the health care providers and the patients, but also unethical and strained doctor-patient relationships.

As per the latest data available, over 12.5 crore Ayushman cards have been issued and about 1.23 crore people have availed the benefit of this scheme (merely 2 percent of the 50 crore target beneficiaries). In addition, Ayushman beneficiaries are denied benefits they were previously entitled to under other schemes—a pregnant woman below-poverty line beneficiary of AB-PMJAY scheme, going for institutional delivery no longer receives assistance of Rs 1,500 under Janani Surakhsa Yojana.

Under AB-PMJAY, state governments have the flexibility to run the scheme on Insurance Model or Trust Model. In case of the former model, premium is paid to an insurance company, and in the trust model, the premium is pooled into a trust/society that will be responsible to manage the scheme and settle the claims. Majority of the states have implemented the scheme on the trust model. However, a shift to the full insurance model is being actively considered (lowest bidders are typically chosen as insurance providers). Such a transition would hinder increased access to quality health care as it serves in the interest of insurance companies to suppress scheme utilisation. Also, the companies are known to not share claim data, thus putting the government on the spot (as it cannot determine if the claim denials are legitimate).

Finally, about 54 percent of the empanelled hospitals under the Ayushman Bharat scheme are private hospitals. However, they account for 75 percent of the total claim value. The reason behind this skew is that majority of the empanelled government hospitals are smaller hospitals, not adequately equipped to provide super- and multi-speciality treatments. It is this relative lack of facilities at government hospitals that reinforces the “manufactured” notion that private healthcare is better than government healthcare.

Insurance without Infrastructure
The second wave of the Covid-19 pandemic has been devastating with ‘I can’t breathe’ stories coming from all corners of the country. However, it is now amply clear that people were dying not simply because the virus infected them, but because they failed to get access to quality health care, across cities, town and villages. The pandemic has exposed the dark underbelly of our healthcare system and it is fairly obvious that incremental fixes (such as health insurance schemes) will have little chance of achieving sustained benefits on the healthcare front.

Access to quality healthcare is elusive for a large proportion of the Indian population with little over one percent of the GDP being spent on health (compared to 5-10 percent in advanced economies). As per the World Health Organisation, India ranks 179 (out of 189 countries) in public health spending. India is the most privatised healthcare market in the world (implying diminished affordability especially for low-income patients) and in the absence of adequate regulation, there is blatant violation of patient rights and the range of unethical practices that go unchecked. Also, national data reveals that 50 percent of the bottom quintile population end up financing their healthcare expenses by distress selling of assets or by taking usurious loans, further plunging them into poverty.

Despite India having over 1.25 million doctors, the public healthcare system operates at a dismal ratio of eight doctors for 100,000 people. Corresponding figure for Cuba is 842. On similar lines, most of the 30,000 primary health care centers (PHCs) in India remain non-functional and ill-equipped to provide any kind of quality care—majority of them have dismal to nil medical staff, or drugs or test facilities. Stark state-wise disparities also exist.

In Kerala, where primary health care is managed in collaboration with the local self-government (panchayat), a PHC can be found in every village and caters to nearly 13,000 people (all India average is 35,500 people covered per PHC). However, in a state like Jharkhand a PHC covers 94,000 people across 109 villages (all India average being 26 villages per PHC). It is thus high-time that we realise that there is no alternative to strengthening the public health infrastructure in our country. Not to mention, values of empathy, trust and mutual respect need to be the bedrock of institutions providing health care.

Lastly, revisiting the question—is the Ayushman Bharat Scheme a win-win or win-lose, it will be fair to say that it is both and more. While it was conceived as a win-win scheme in the minds of the policymakers, the on-ground realities suggest it to be a win-lose game. In fact, insurance sans infrastructure is making it a lose-lose game.

Nevertheless, it is never too late to set our priorities right. For if not now, then when? So dear friends, in the memory of those whom we loved and lost, let us never forget this suffering and ordeal and endeavor to rightfully demand and work towards strengthening our public health infrastructure in true sense of the words.