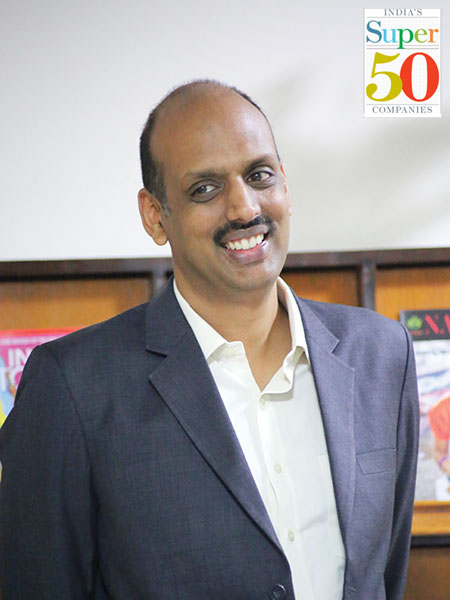 Rajeev Nannapaneni, vice chairman and CEO, is expanding Natco’s global footprint
On the morning of October 4 last year, shares of the Hyderabad-based Natco Pharma opened at ₹948 apiece—a sharp 19 percent uptick from the previous day’s closing price of ₹795. Within the first hour of trade, the shares moved further north to ₹954 and stayed there, having hit the upper circuit—or the highest intraday movement permissible for the stock (20 percent).

On that day, investors were displaying their exuberance over Natco’s marketing partner Mylan’s announcement that it had received the US Food and Drug Administration’s (FDA) nod to market the generic version of the best-selling multiple sclerosis drug Copaxone. Given the intricacies of running a pharmaceutical business in the US—legal jousting over patents and strictures from the stringent FDA make the world’s largest drugs market tricky to navigate—the nod from the bourses was well-deserved.

Over the years, the mid-sized Natco has built a strong portfolio of generics in the US and India. In FY18, “[Natco’s] top four performers in the US have been the generic versions of] Copaxone, Tamiflu, Doxorubicin and Lanthanum Carbonate,” Rajeev Nannapaneni, the company’s vice chairman and CEO, told investors in a conference call in May this year.

However, if the past is a reliable precedent, returns from generics—or cheap copy cat drugs of original molecules like Copaxone—tend to plateau over time. This happens as more and more generics players make newer copies of the original drug.

Nevertheless, analysts are confident of Natco’s prospects. Complex molecules like Copaxone are relatively more difficult to copy. “We expect [Natco’s] Ebitda margins to hold up at around 49 percent [in FY19] due to high gross margins from generic Copaxone and profit sharing in generic Tamiflu,” analysts Deepak Malik, Ankit Hatalkar and Videesha Mehta at broking firm Edelweiss wrote in a report on July 3.

Ravi Dharamshi, founder and MD at ValueQuest Investment Advisors, agrees. “If you look at Natco’s pipeline, it has [generics of] Copaxone, Revlimid and Sorafenib, which are drugs that are difficult to break into because of the complex technology or due to the commercial, technical and legal wrangling involved,” he tells Forbes India in a phone interview. “Natco targets drugs where the competition is less. It has monetised Copaxone and has a few other drugs up its sleeve.”

The razor-sharp focus on segments with little competition—and regions with high profitability—has helped Natco beat industry growth. Its profits have surged at an average annual rate of 40 percent in the last five years, compared with the industry’s 16.71 percent. Natco’s return on equity, at 22.60 percent, is also much higher than the industry’s 10.69 percent. “The cash flows Natco generates from Copaxone can be invested in multiple projects and the company can again come up with additional niche drugs,” Dharamshi expects.

Over the next three years, the US will become the most important market for Natco, but Nannapaneni is already expanding Natco’s footprint. “Rajeev is moving ahead of the curve, by taking the call that the US market might be losing its charm. He is diversifying into Brazil, Canada and India,” says Dharamshi. The foresight points to a robust future for the drug maker.