Brands and consumers take a shine to the greener, pocket-friendly option to naturally-mined diamonds 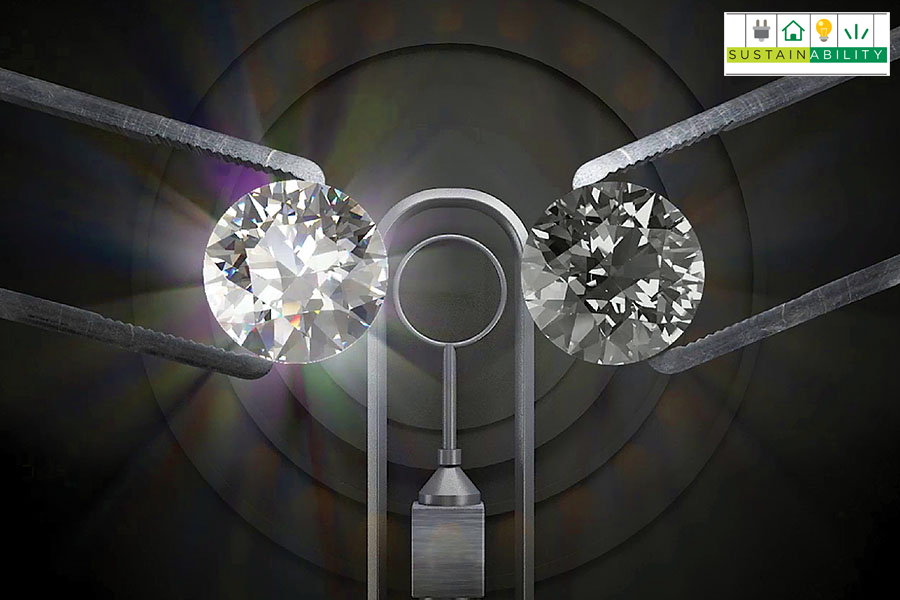 A CVD diamond (left) is composed of 100 percent carbon and is nitrogen free. It has more shine and brightness than a mined diamond (right)
Image: Courtesy Limelight Diamonds

In 2015, after her return from London, investment banker Pooja Sheth was scouting for an opportunity to start her entrepreneurial journey in India when a meeting with Bakul Limbasiya, a leading manufacturer of lab-grown diamonds, provided her with a direction and purpose.

Surat-based Limbasiya, one of the pioneers in the use of Chemical Vapour Deposition (CVD) technology in India, has been instrumental in shaping the lab-grown diamonds industry in the country. With huge production volumes, he proved to the world that India need not just limit itself to cutting and polishing diamonds, but can also become one of the largest producers of diamonds, that too those of the finest quality. Sheth was blown away by the technology being used to grow diamonds using the CVD technique. The reactors for it had been developed indigenously and made completely by Limbasiya and his team. Besides understanding the entire process, she felt she wanted to bring this story to the consumer because she saw a big opportunity in finding a market for diamonds made in labs in India. Sheth launched her lab-grown diamond-studded jewellery brand Limelight in 2018.

Less harsh on the environment and at least 50 percent cheaper, lab-grown diamonds are increasingly finding favour among consumers, especially millennials looking for greener and affordable options. 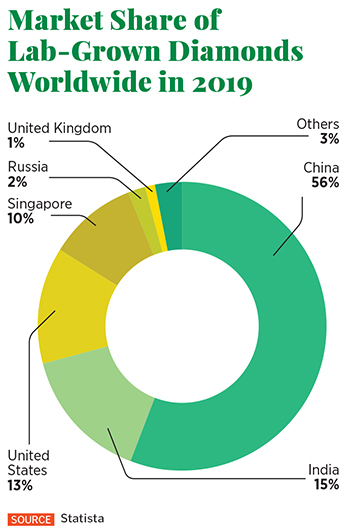 Born in a lab
CVD is the technique predominantly used in India to grow diamonds. It is an advanced technology that replicates the diamond creation process that occurs under the surface of the earth, in labs. These stones have the same optical, physical and chemical properties as mined diamonds. A CVD diamond is composed of 100 percent carbon and is nitrogen free. World-renowned diamond grading and certifying labs classify such diamonds as a Type IIa diamond. The shine and brightness are significantly better than any other diamond.

Another process, the High Pressure High Temperature (HPHT) one, which is the predominant technique used in China, uses graphite and a molten metal influx to form a diamond under severe temperature and pressure conditions. With impurities of metal in the diamond, HPHT diamonds are never 100 percent carbon composed, are not the purest and cannot be classified as Type IIa.

“Lab-grown diamonds are created under the controlled environment of a laboratory, hence are a sustainable alternative as [the process] defies the heavy and harsh techniques which are undertaken for mining diamonds naturally,” says Vandana Jagwani, creative director of Mahesh Notandass Fine Jewellery, which launched lab-grown diamond jewellery brand Vandals in February 2020.

Since time immemorial, mining diamonds has involved digging up large tracts of land and excavating to deep recesses below the earth’s surface using heavy equipment and machinery.. “One carat of a CVD diamond ends up saving 109 gallons (498 litres) of water and 250 tonnes of land,” points out Sheth. 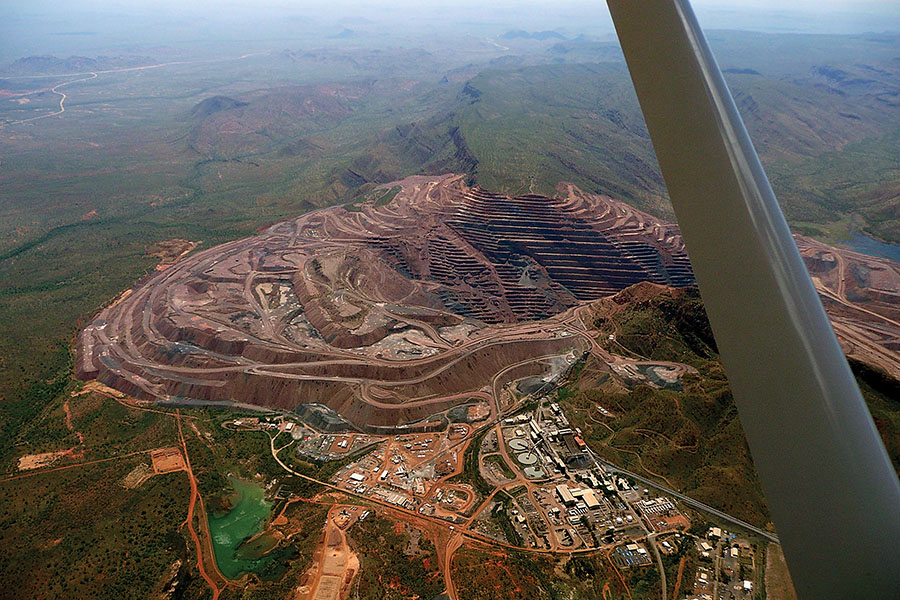 Last November, Rio Tinto ceased mining activity at the Argyle mine in Western Australia. It had been in operation since 1983
Image: Shutterstock

The huge cost incurred in the mining obviously gets added to the value. Since there is no mining cost involved while growing diamonds in the laboratory, it reflects in the pricing and the customer stands to benefit from it.

What’s more, natural diamonds are a limited resource. In November 2020, Rio Tinto ceased mining activity at the Argyle mine in Western Australia. It had been in operation since 1983 and in that time, 865 million carats of rough diamonds were produced. “The supply of natural diamonds is decreasing and many of the mines are getting exhausted as it is a limited resource. It is no more worth the while as getting the final polished diamond from mines to markets, i.e, from diamond exploration to potential consumers requires 20 to 25 years, and are a huge investment,” says Prasad Kapre, who was associated with diamond company DeBeers for 14 years (1995-2008), heading its trade marketing in India and being responsible for launching brands such as Nakshatra, Arisia and Asmi. “Also, in the recent past, there has been no new major commercial discovery that we have heard of,” he adds. 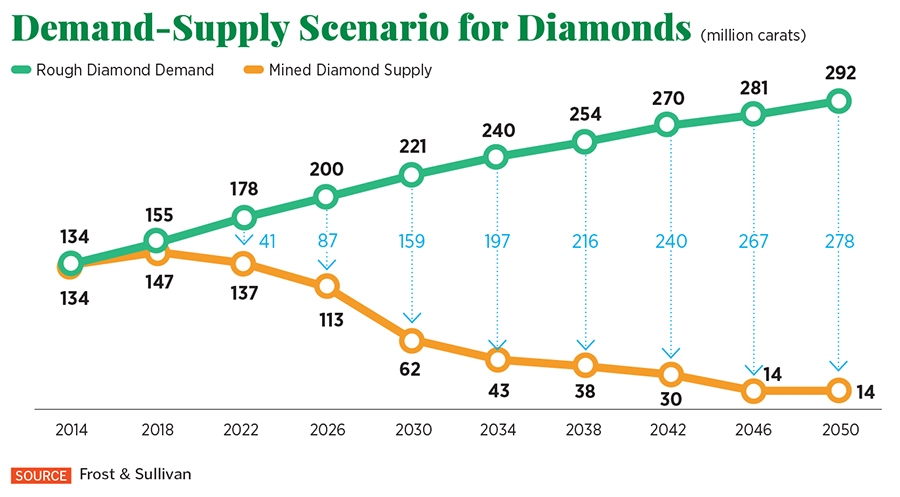 Published in 2015, a Frost & Sullivan report suggested that due to limitation of resources, natural diamond supply will decline to 62 million carats by 2030 while demand will increase (see infographic).

“Today in the world we consume 150 million carats of natural diamonds. You can very well imagine the kind of environmental damage we are doing by consuming a piece of rock. At the end of the day, there is nothing I can do apart from feeling good and feeling confident by owning one. Why should that come at the cost of hurting my planet or my people? That I think is the proposition that lab-grown diamonds bring to the table,” says Sheth, who sees the huge gap of 159 million carats between demand for rough diamonds and the depleting supply of mined diamonds in 10 years as an opportunity to be filled with lab-grown CVD diamonds.

Millennial-driven opportunity
In 2018, after mining diamonds for 130 years since being founded in South Africa, De Beers launched Lightbox Jewellery, a line of “impeccably made, delightfully priced” jewels with lab-grown diamonds. The decision seemed like a clear attempt to keep up with non-mined diamonds as 21st-century consumers, looking for something both affordable and conflict-free, have embraced the idea.

“We live in a generation where people are now indulging more in environmentally friendly alternatives which are rather practical and sensible. Our consumers mostly include people who are curious, progressive and adaptive, and we believe in educating our clients about the sustainable methods of creating these diamonds,” says Jagwani.

Sheth adds that the environmental benefit is appreciated by consumers of the next generation or the millennials. “They want to be more environmentally conscious and invest in products that are sustainable,” she says.

According to a 2021 Bain & Company report on the global diamond industry, sustainability and social consumerism became more influential in purchase decisions, and the pandemic heightened attention to global health and safety concerns. Regarding diamond jewellery, in China and India, consumers care most about environmental preservation, conflict-free supply chains and the carbon footprint.

India has the world’s largest millennial population at 41 crore and climate is the top priority on their minds. Seventy-eight percent of that population prefers to spend on experiences rather than high-value possessions such as a house, gold or jewellery, points out Sheth.

What’s more, most sustainable alternatives to conventional demand a premium today. However, a lab-grown diamond is one of the few that is scaled to cost less than conventional.  “Lab-grown diamonds are at least 50 percent cheaper than natural diamonds, therefore they have the unique selling proposition of being sustainable yet affordable,” says Sheth.

Kapre too considers lab-grown diamonds as the next big opportunity. “Affordability works as the millennials would want to flaunt it and not put it away in the locker. For the same colour, clarity and cut, the price difference is substantial and a lab-grown diamond is far more affordable than a natural diamond.”

As a leading producer and exporter of CVD diamonds, India stands to gain from this situation. According to the Gems and Jewellery Export Promotion Council, for the period April 2020 to March 2021, at ₹5175.69 crore, there has been a 74 percent year-on-year jump in exports of polished lab-grown diamonds, over the comparative figure of $421.09 million (₹2,985.3 crore) for the previous year. 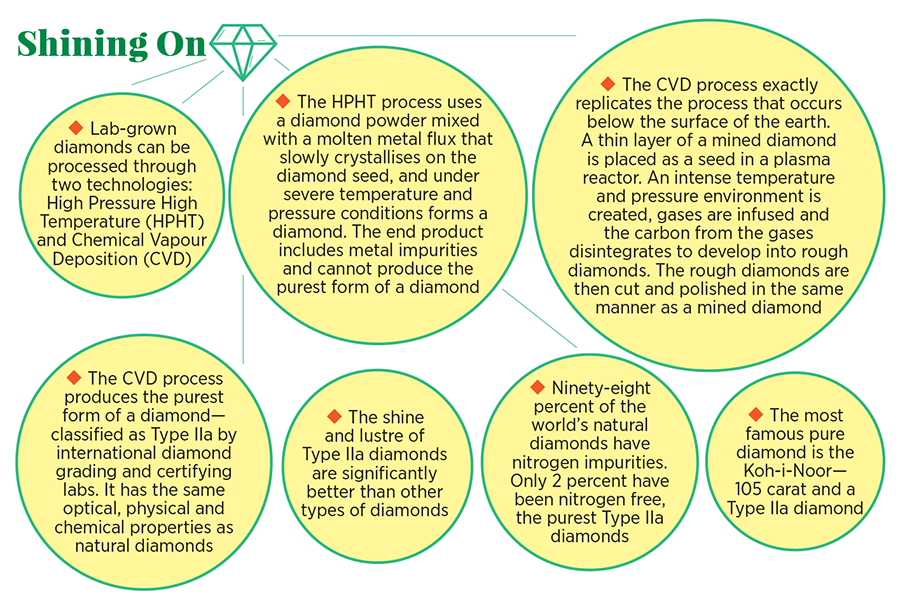 Certification is another concern. In February 2021, WD Lab Grown Diamonds, a leading laboratory-grown diamond producer in the US, announced that it was the first company to be certified under the provisional Certification Standard for Sustainable Diamonds (‘SCS 007’). This achievement grants WD third-party authorisation to use the claims of ‘Certified Sustainable’ and ‘Certified Climate Neutral’ for its diamonds. The climate neutral designation is an exemplary achievement, representing a level of accountability beyond standard Carbon Neutrality by also measuring, mitigating and offsetting the entire spectrum of greenhouse gases, climate pollutants and legacy emissions.

“Can we prove that lab-grown diamonds are more sustainable?” asks Kapre. “We must leave the task to third-party certification agencies, in the same manner as WD Lab Grown Diamonds. We as growers can meet the parameters and should not be directly making claims of being sustainable,” he adds.

It is also early days for the Indian market when it comes to awareness among consumers and retailers. While millennials seem open to the idea of embracing lab-grown diamonds as an alternative, Sheth has faced resistance from retailers as lab-grown diamonds are often confused with artificial diamonds. “Today we have the margins to milk but the mindset is not letting the retailers milk this opportunity,” says Sheth, who has managed to partner with 10 retailers across Mumbai, Hyderabad, Goa, Kolkata and Ahmedabad.

There is also the concern about the resale value and to address this, many lab-grown diamond jewellery brands like Limelight, Vandals, Anantaa and Fiona offer buyback and exchange opportunities to consumers.

“This is just the beginning for India,” says Limbasiya pointing to the robust 74 percent year-on year growth in exports that the Indian lab-grown diamond industry has seen. “Going forward, the industry will see an even stronger growth in exports as global economies recover and there will be a significant pick-up in consumer demand. And India will have a huge role to play in further shaping the industry worldwide not just because of its expanding production strength of CVD diamonds and manufacturing prowess, but also a huge consumption potential with the largest millennial population.”

Kapre is mindful of the opportunity but says both mined and lab-grown will coexist. “We must leave it to the personal choice of the consumer,” he says. “In a price-sensitive market like India, an affordable diamond becomes an easy buy. And, the big shift is brought about by the millennials, who look for honesty, integrity, certification, sustainability. “While the mined diamond is an ultimate symbol of love, lab-grown diamonds are the ultimate symbol of success for the millennials who believe in themselves.”

Tweets by @forbesindia
RBI's 2018 crypto circular no longer valid, it tells banks; Xiaomi's 8-minute hypercharge; and a chat with an Infosys cloud exec on trillion-dollar benefits
Photo of the day: Pre-monsoon showers