Beyond the glamour of IPL auctions, a cricketer's struggle to survive

Kashmiri player Manzoor Dar was picked up for the Indian Premier League in 2018. Four years later, with no job or stability, he ekes out a living playing local cricket 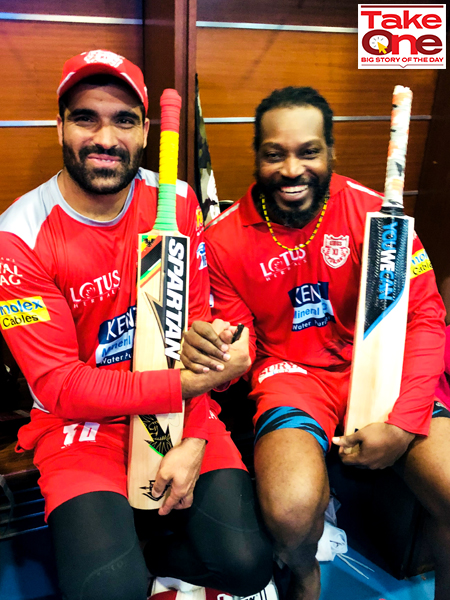 At the height of his career graph, Punjab Kings player Manzoor Dar (L) poses for a picture with his teammate, the legendary West Indies cricketer Chris Gayle after an IPL match in 2018. Image: Courtesy Manzoor Dar

When the Punjab Kings franchise raised the paddle to buy Manzoor Dar in the 2018 Indian Premier League (IPL) auction, cricket fans in Jammu and Kashmir erupted in joy.

Dar’s entry into the world’s most famous cricket league was iconic in many ways.
The all-rounder became just the second cricketer from Jammu and Kashmir to get an IPL contract – Dar was bought at Rs 20 lakh.

Having worked as a watchman and a woodcutter to make a living, the cash-rich IPL was like a dream come true for Dar. Countless stories followed in the media with headlines reading, ‘From watchman to IPL’, ‘Manzoor’s journey from rags to riches’ and so on. Even the then 24-year-old thought it would be an end to his miseries and that his struggling days were behind him.

But things didn’t quite pan out the way he thought. While Dar learnt a lot by spending time with some of the cricket greats in the Punjab Kings dressing room, he wasn’t given any opportunity to play. And unsurprisingly, he was released by the franchise ahead of the next IPL season.

Now, four years on, Dar is back to where he started or even worse off. “Wherever I go to play, thousands of cricket fans come to watch me, they follow me. But now they must be thinking when Manzoor couldn’t reach anywhere in terms of financial stability, where would we?” Dar told Forbes India on the sidelines of a local cricket match in north Kashmir’s Bandipora district.

Dar was playing with a local team in a not-so-standard tournament. “I have no other choice. If I wouldn’t play these local matches, I’d have to either return to labour work or I wouldn’t be able to feed my big family,” he said in a heart-breaking tone.

Dar’s father is a labourer while his mother is a housewife. He has seven siblings– four sisters and three brothers– all unmarried and unemployed. Dar being the eldest has the responsibility to take care of them.

“My siblings are all studying, sisters have come of marriageable age, and mother is ill. I would never ask any local teams to pay me for playing matches, rather I spent from my own pocket. But now, I have no option left. I still don’t ask them to pay me– whatever they give, sometimes Rs 2,000, sometimes less, sometimes more– this is the only income I generate right now,” he said.

Dar, who comes from a small village in Bandipora, finds himself in a fix when it rains since it stops him from playing local cricket and earning a livelihood. Now with the winter season in Kashmir upon him, he is unsure whether he will be able to run his house or not.

Also read: Fun and Games: How sports tourism is picking up pace in India

So, what did he do with the amount he bagged for the IPL (Rs 20 lakh)? “We were living in a shed, so I had to buy some land first. Then I started the construction of the house where we are living currently. With that amount, even the construction couldn’t be completed fully.” he said.

What’s more, as everyone thought Manzoor’s life had changed post-IPL, whatever little help he would get before too disappeared.

“My life became tougher (after the IPL). I had friends and companies helping me but they all left thinking my life is on track now. But they don’t know the reality: I have more problems now than I had before. I would earn somewhere around Rs 20,000 to 25,000 a month but after IPL 2018, I have not earned a penny from any other source except from playing local cricket,” said Dar who is popularly known as Pandav thanks to his strong physique. 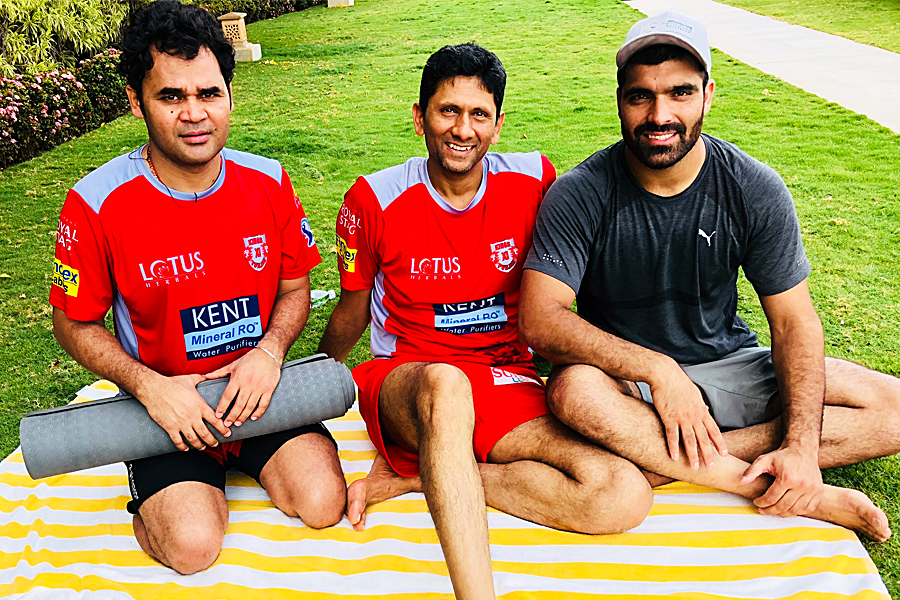 The 29-year-old approached the Jammu & Kashmir government quite a few times, seeking a job but the administration is yet to pay any attention.

“If a player goes on to represent the state/region at a higher level, I think it’s mandatory for the state government to honour him/her with a job. These players become idols for youngsters and they take inspiration from their journey,” he said.

“But when you, as an idol to many, are unemployed, what message would you convey to your followers? Would kids want to play at the highest level and still be jobless? Would parents allow their children to play cricket or any other sport professionally when they see that even accomplished sportspersons are without a job?” Dar asked.

When Dar went to the IPL, he was promised a job by the then-state government but after the coalition government collapsed in J&K in 2019, it all faded away. “I once delivered a speech at Tagore Hall (Srinagar). Former Chief Minister Mehbooba Mufti and Home Minister Rajnath Singh were present and they told me I would be provided with a good job so that I become an inspiration for the young generation. But after the government collapsed, nobody approached me,” Dar said.

Dar has played 10 List-A and 23 T20s for J&K. However, lately, he has even lost his place in the state team. “When you have to juggle to earn a livelihood, it becomes difficult to match professional standards of training. I would not play local mating cricket and travel to Srinagar to practice on a turf wicket. But now, since I’m dependent on local cricket, I am unable to do any of it,” he said.

Also read: All That Glitters: How The Money-spinning IPL Turned Cricket Into Gold

What could bring his life back on track? “I have spent my entire life playing cricket with an aim to make my state proud. I think any cricketer or a sportsperson who represents the state at a higher level at least deserves a stable job. So, I also just want a job, so that those who take inspiration from me aren’t disappointed and they continue to play the game,” he remarked.

Samiullah Beigh, former Jammu and Kashmir cricket team captain, agreed with Dar, saying providing a job is the least the government could do for sports stars.

“Cricketers like Manzoor Dar, Rasikh Salam, Sameer Ali, Abdul Samad, Shubham Khajuria, etc. who have represented UT of J&K at various levels and performed very well, must have some kind of job opportunities in the UT of J&K. Various departments of the J&K government can play a significant role in it by reserving some vacancies under the sports quota,” he said. 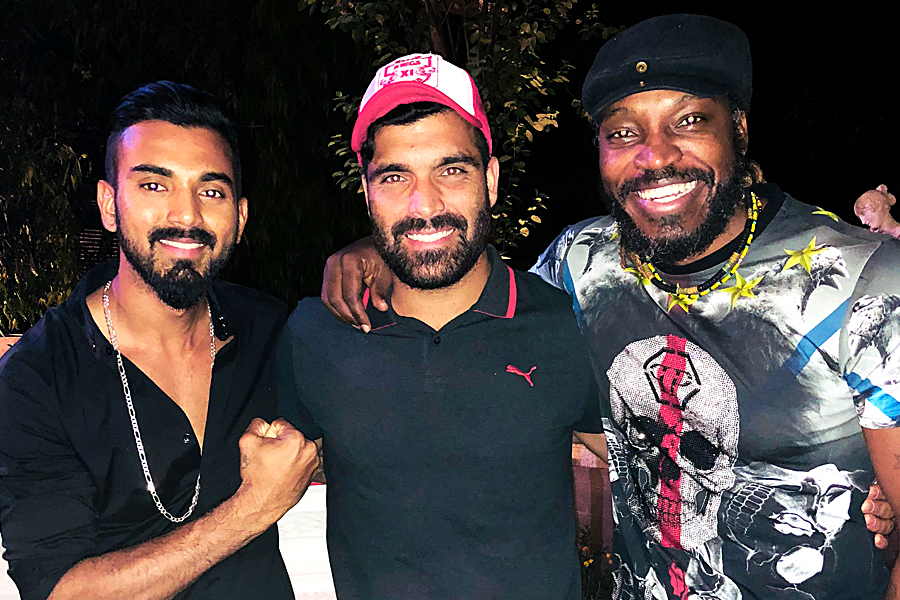 Manzoor Dar (M) with Kl Rahul (L) and Chris Gayle (R) at a after party during the IPL 2018. Image: Courtesy Manzoor Dar

Earlier this year, the J&K government introduced a new sports policy for the recruitment of outstanding sportspersons. However, the eligibility criteria seem too tough for players to get through. “The government of J&K recently announced a renewed sports policy but in cricket, the level of competition in India is very, very tough. As such it is near to impossible for cricketers of J&K to achieve feats like 1st, 2nd or 3rd positions in the Ranji Trophy (India’s premier domestic cricket tournament) so as to be eligible for the job,” said Beigh, who has represented J&K in 61 First-class, 37 List-A and 23 T20s.

So, does the J&K government have any future plans to help struggling accomplished sports stars like Manzoor Dar? “The J&K Sports Council is planning to recruit mentors/trainers at various sports facilities in accordance with the criteria fixed by SAI (Sports Authority of India) under the Khelo India Scheme or criteria fixed under PMDP (Prime Minister’s Development Package) scheme. Athletes of national or international repute irrespective of their medal in team events will be adjusted under these schemes to channelise the energies of budding youth in the right direction,” said Nuzhat Gul, secretary of J&K Sports Council.

“A proposal in this context is being submitted to the government for augmenting the coaching facilities at all sports facilities created by the Sports Council. If he fulfils the criteria, Manzoor Dar can be considered under PMDP or Khelo India scheme for hiring his services,” she added.

Also read: Virat Kohli is one of the best cricketers on earth. He's great for cricket: Brett Lee

Besides state governments, is the Board of Control for Cricket in India (BCCI), the national governing body for cricket in India, or its state units doing anything to help cricketers who are struggling financially?

“Well, there is no policy with BCCI to look after those (cricketers) who are struggling but surely they provide medical assistance,” said Anshuman Gaekwad, the president of the Indian Cricketers’ Association. 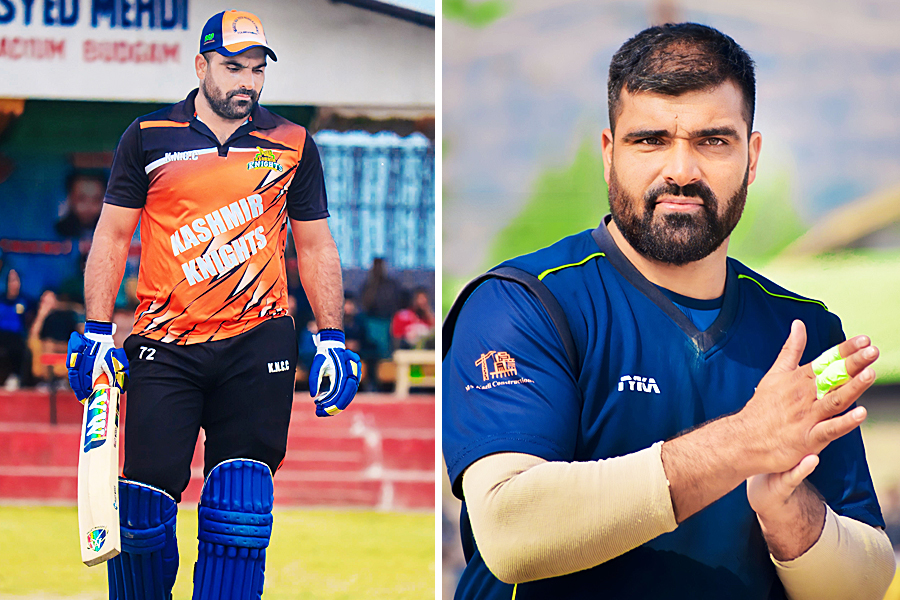 One of the objectives of the Indian Cricketers’ Association, the official association for ex-cricketers in India recognised by BCCI, is “negotiating with the BCCI for securing the best commercial and other terms for cricketers including welfare measures and similar benefits for both current and former cricketers.” But Gaekwad, a former Indian cricketer, said that the association doesn’t even have enough funds yet to accommodate its members.

“As far as ICA is concerned, they would certainly like to help fellow cricketers but since they have limited funds given by BCCI, it is extremely difficult to even take care of the demands of ICA members themselves. Moreover, as per the ICA constitution and guidelines given by the Honourable Supreme Court, the current system layers do not come under the umbrella of ICA,” he said.

“Probably once ICA has sufficient funds, they would surely extend help to cricketers like Manzoor as ICA is meant for the welfare of the cricketers but currently only for the retired cricketers,” he added.

Tweets by @forbesindia
Photo of the day: Into the final they go
Understanding your hemodialysis options