More than serious and long-term contenders, they appear to represent the muckraker tradition that so energised American politics in the early 20th century 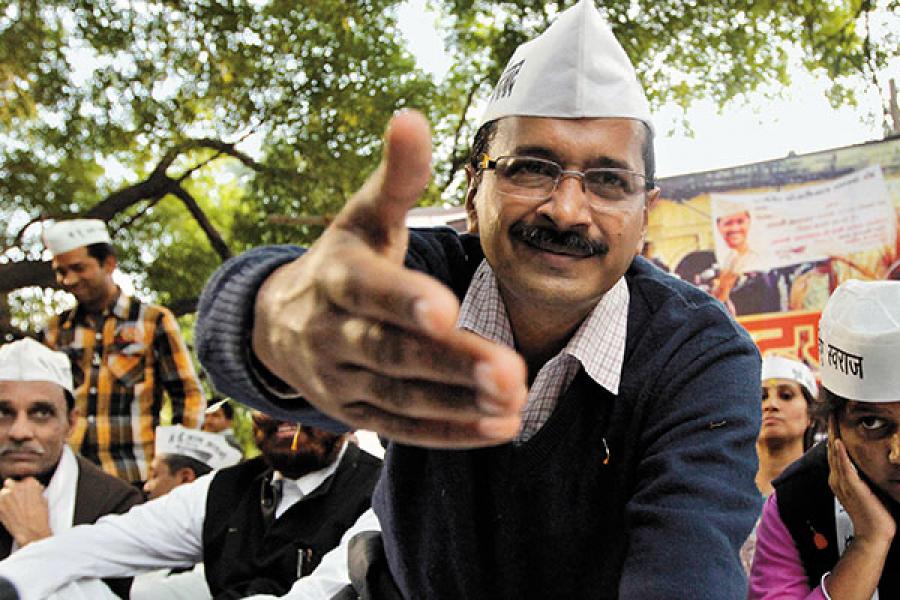 Is the extraordinary debut of Arvind Kejriwal and the Aam Aadmi Party (AAP) in the Delhi assembly election a revolt, a revolution or a flash in the pan? Can it be expanded to new geographies and states? Can it be scaled up to leave its impact on the 2014 Lok Sabha election? Is AAP’s success a function of the small constituencies and unique socio-economic conditions of Delhi—or is it a larger political phenomenon?

If AAP had won say six or even 10 seats in the Delhi election, the answers and conclusions would have been fairly easy. The diffidence in making predictions has occurred because AAP did much better than anybody expected—whether critics or adherents—and took home 40 percent of the assembly’s seats.

To try and guess where Kejriwal and the AAP movement will go, it would be helpful to analyse why they won 28 seats in Delhi and the motivations of those who voted for them. The vote for AAP was not a vote for local candidates or grassroots stalwarts. It was a vote for Kejriwal. Quite simply, he emerged as the personality of the Delhi election. In turn, the vote for Kejriwal was not a vote for hope or a bet on a vision of a golden future—it was a gigantic and devastating protest vote.

In the days before polling, the most common explanation of people who said they would vote for Kejriwal was: “At least he says things that need to be said.” They were not concerned with his economic philosophy—many who backed him are still innocent of it—and did not instinctually believe the institution of the Lok Pal would finish corruption and eradicate the black market for gas cylinders. They just saw Kejriwal as a brave “person like us” who named names, spoke about cronyism in high places and attacked everybody and her son-in-law. Broadly, he sliced into the Congress vote, while the BJP vote remained roughly where it was.

Kejriwal’s appeal can work in Delhi and Gurgaon and perhaps parts of Mumbai. Maybe it can work in Bangalore as well, provided he can find the linguistic connect and local faces that can use a mix of populism, indignation and cynicism to forge an unlikely alliance between slums and gated neighbourhoods. Of course, local faces who speak the local language may not need the AAP label at all. Some of them may fancy they can project themselves in the immediate community while being autonomous of Kejriwal. In the process, they could further fragment the vote.

In a Chennai or a Kolkata, local politics is dominated by strong regional parties that are not affected by the current anti-Congress mood and are served by a tight network of party workers and transactional syndicates. Here Kejriwal will find it still harder to make inroads.

Three points flow from this. First, the smaller the constituency size, the greater will be the impact of AAP or an AAP-type electoral intervention. Few states in India have assembly constituencies and electorates as small as Delhi’s. In municipal elections in big urban centres, Kejriwal and those inspired by him could make a significant dent. As voting blocs get consolidated into larger parliamentary constituencies, this will become difficult. As such, the Lok Sabha election of 2014 may be far tougher for Kejriwal not just across urban India but even in Delhi itself.

Second, does Kejriwal threaten Narendra Modi or does he represent a microcosm of the same appeal? Like Modi—but admittedly unlike the BJP as a political party—Kejriwal positions himself as the untainted outsider, the man from nowhere, the truth teller, the unabashed and unafraid angry Indian, without a well-chronicled family history, bashing away at a culture of privilege. The two men tap into exactly the same sentiment. This is a reality accepted by AAP functionaries. They admit many of those who voted for them in the Delhi assembly polls, particularly the young and the restless, indicated they would opt for Modi in six months.

Third, Kejriwal and AAP are confronted with competing choices: Focus energies on the (expected) second assembly election as well as Lok Sabha election in Delhi; or stretch resources thin and go in for a rapid expansion. Option two has the makings of a bubble that could burst very quickly. As for option one, yes, it could lead to a possible victory and government formation in Delhi, and yield a couple of Lok Sabha seats. Equally, if the BJP rectifies some of the mistakes it made in December 2013, it could leave AAP even further behind in a possible May 2014 Delhi state campaign that will have the additional advantage of piggybacking on Modi’s national campaign.

Ultimately, where does one place Kejriwal and AAP? More than serious and long-term contenders, they appear to represent the muckraker tradition that so energised American politics in the early 20th century. Activists, writers, woolly-headed but well-meaning socialists, utopians: The muckrakers were a reaction to the excesses of the Gilded Age, a period of enormous economic growth as well as massive corruption in the United States.

Backed by a seething public as well as by sections of big business, which wanted greater transparency and reform, the muckrakers attacked the cosy arrangements of the establishment. They produced pamphlets and made a habit of political overstatement, attacking the rich and the famous, the great and the good, the high and the mighty. Political opponents accused them of hype and exaggeration.

With their crackpot policy agenda, muckraker candidates didn’t make it very far electorally. However, they did provide a check on the extremes of a completely unwholesome rendition of capitalism and of industrial democracy, and acted as catalysts in a cleansing of American public life. The muckrakers came to symbolise a cathartic moment that was greater than their individual electoral legacy. In six months to a year, will we be saying the same thing about Arvind Kejriwal?

Get the latest stories, videos, and podcasts from Forbes India directly in your inbox every Saturday
Thank you for your comment, we value your opinion and the time you took to write to us!
Comments 27