Can Indian Cricket Live Up to its Hype in 2014?

We appear to have a cluster of players who can dazzle and win games. But unless the current bunch can take forward the agenda set by the ‘old order’, lndian cricket may actually have declined 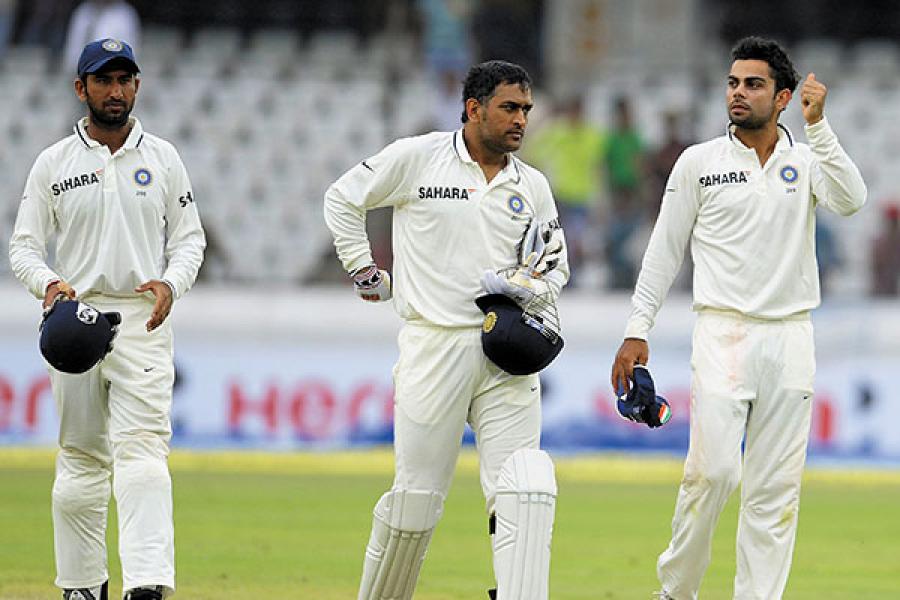 Image: Getty Images
The future of India is represented by the likes of Cheteshwar Pujara and Virat Kohli (right), with MS Dhoni (centre) as the bridge between the old guard and the new

The new year holds out both challenge and promise for Indian cricket. Mahendra Singh Dhoni’s team finished 2013 ranked number 1 in ODIs and number 2 in Tests. Along with South Africa, England and a resurgent Australia, India form the ‘elite’ cluster, as it were, in international cricket. Yet doubts persist.

The preceding year had been exciting and fulfilling, several significant victories signalling a revival of sorts after the harrowing time since the World Cup triumph in 2011. Yet, considering the walloping received from South Africa in the ODIs, sceptics may still argue against these rankings.

They may have a point, and yet the rankings do give an index to both performance and potential. It devolves, therefore, on the Indian team to ratify their status on every occasion. Indeed, the onus in 2014 is not just to remain on top in ODIs but regain the number 1 ranking in Tests, earned in early 2011, alas all too briefly.

The series of setbacks suffered thereafter, especially playing overseas, puts a question mark on the abilities of Indian players in unfamiliar conditions, and this needs correction. This year presents multiple opportunities for doing this. It’s a packed itinerary interspersed with three important overseas tours: New Zealand in January/February but even more significantly to England (June/July) and Australia (October-December) where the team will play five-Test series.

So what can we expect from Team India?

In my opinion, this is a significant phase in Indian cricket history. The makeover of the team, which started with the retirements of Sourav Ganguly and Anil Kumble in 2008, reached completion with Sachin Tendulkar’s emotion-charged farewell in November 2013. Rahul Dravid and VVS Laxman had quit the previous year.

True, Harbhajan Singh, Zaheer Khan, Virender Sehwag, Yuvraj Singh and Gautam Gambhir are still around, but almost all of them are struggling to find a place in the Test team. All things considered, it would be fair to say that they don’t represent the future of Indian cricket.

That, for the present, comes through Shikhar Dhawan, Rohit Sharma, Virat Kohli, Cheteshwar Pujara, Bhuvaneshwar Kumar, Mohammed Shami, Umesh Yadav, Ravichandran Ashwin and Ravindra Jadeja, with Dhoni the bridge between the old guard and the new.

That success begets success is a life truism that finds even greater relevance in sport. Winning is a state of mind which can become a habit, as the West Indies (in the 1970s and ’80s) and Australia (for 15 years starting from 1990) have shown in cricket. The setbacks in South Africa have shown how far India still are from reaching those heights, but there is consensus that the potential exists.

In the batting, particularly, India appear to have a cluster of players who can dazzle and win games. Dhawan is an explosive left-hand opener who has left little scope for lament at Sehwag’s decline. Not an easy task considering Sehwag’s devastating batsmanship and match-winning abilities.

The profligate Rohit, after squandering a few years with a less-than-earnest approach, appears to have found himself now. A gifted batsman, he bats with an elegance and benign ease that can be grossly misleading. Nobody hits the big shots as well or as frequently, as we have seen in ODIs. With back-to-back hundreds in his first two Test innings, Rohit has shown adaptability and ambition. Now, of course, he needs to prove himself as an all-wicket player.

By common consensus, however, the two batsmen who look good for the ‘very long haul’ are Kohli and Pujara. The former has had a dazzling run in ODIs even as he grows in stature as a Test player with every innings. Pujara, though not quite possessing the same star quality as Kohli, has been outstanding in Tests, but has failed to find a place in ODIs because of suspect fitness caused by dodgy knees.

The bowling lacks the edge which the batting has and that can show up adversely in results, more so overseas. But it must be remembered that several of the bowlers are in their first or second season in international cricket and have still to ‘settle in’. Usually, bowlers do take longer to mature.

Going by their performances in 2013, this is a talented bunch of players. While most of the team’s successes came at home, it is the manner in which these were achieved which was heartening. There is a flair and aggression about the side which reflects an approach that befits New Age India’s ethos. The hunger to win—as well as reap rewards for this—is evident. There is nothing namby-pamby about this bunch.

I have a caveat to this optimistic scenario however. Comparisons are odious and unfair, but unless the current bunch can take forward the agenda set by the ‘old order’, improve on the legacy set by them, lndian cricket may actually have declined.

The period when Tendulkar, Dravid, Laxman, Ganguly and Kumble played together is widely and rightly regarded as the golden era in Indian cricket. The legacy that every sportsperson leaves behind him or her is the sum of their achievements plus a sense of their personal commitment to their sport. But some sportspersons have much more than that; they manage to inspire long after they’ve gone.

Tendulkar, Rahul Dravid, VVS Laxman, Anil Kumble and Saurav Ganguly—who dominated in the 1990s and 2000s—are all gone but their aura is still perceptible. To make it in any sport, you need talent and hard work. But to stay the course you need a lot more. What made these five stand out?

Welcome to the four Ps.

Pride: This is at the top for all great sportspersons: When you play for your country, pride has to be at the top of your mind. There is personal pride—which can be mistaken for arrogance but is instead a faith in their own ability and confidence that they will go out there and do their best. Personal humility is one thing—and desirable too. But when you step into the arena, you have to hold your head high, for what you represent personally and the millions who have faith in you.

Passion: Of course, in a superficial manner, everyone plays with passion. But dig below the surface and it’s never that easy. Many talented players have thrown away their early gains because they got caught up in the high life or their determination did not match their abilities or they could not live up to their potential. Passion means you live and breathe the game. It means that you sacrifice almost everything—friends, family and fun—to pursue your dream. It means that every aspect of the game fascinates as does every element of your own abilities and performance—what can be honed, what can be improved, what is new, what should be removed.

Performance: This is the bulwark, the foundation on which a reputation is built. And these five have shown the world what greatness is through their consistency, the sustained excellence. Yes, there have been ups and downs as there always is in life. But it is the ability to spring back from defeat or from the brink that marks the top players. These players challenged themselves not only to overcome slumps, but chased excellence and set benchmarks for future generations.

Probity: This aspect is usually ignored or assumed, but is perhaps the most important to focus on, especially when sport is driven by so much commerce. The 1990s and 2000s were some of the most disheartening for cricket fans in India particularly as match-fixing scandals took over headlines several times. Reputations were sullied across the world, but the deepest cut was to Indian cricket. To play with your head held high above the muck in such situations shows not just courage but also faith in your personal integrity. This is what Tendulkar, Dravid, Laxman, Ganguly and Kumble did to not only pull Indian cricket out of the morass of despair, but leave it in a state of richness.

Tweets by @forbesindia
7 New Pending Bills You Should be Aware Of in 2014
Can Nokia and Microsoft Pull Each Other Out of the Abyss in 2014?