Who Will AirAsia India and Tata-SIA Send Packing from the Indian Skies in 2014?

The impact of the new ventures in Indian aviation will be limited to begin with. The shockwaves will be felt only from 2015-16 when they are able to scale up in size and operations 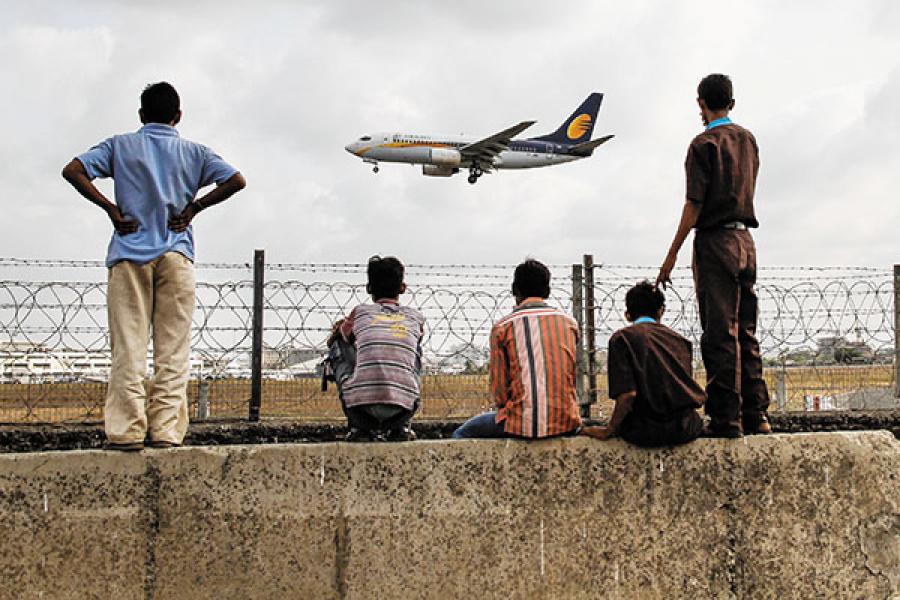 Image: Getty Images
The cost environment in Indian aviation continues to be very hostile and fares are still way below costs

TATA-SIA, the new airline expected to be launched next year, will surely be a game changer and will have a strategic impact on the aviation industry. However, the shockwaves resulting from the two Tata joint ventures (with Singapore Airlines and AirAsia Bhd), will be felt only from 2015-16.

The cost environment in Indian aviation continues to be very hostile and fares are still way below costs. For existing airlines, business conditions are tough and this will impact traffic till the two key elements—fuel and currency costs—stabilise. In the near term, costs might actually increase. Experts say aviation fuel is likely to remain firm. Currency impact will continue to be a challenge in the near term.  The third key cost, airport fees will also remain high in India. I see continuing cost and revenue challenges for airlines at least, till the end of next financial year.

AirAsia India’s entry will directly increase competition and will lead to more pressure on fares on some routes. But the extent of fare-wars will depend entirely on AirAsia India’s network and scale of operations in India. At this time, there is still some uncertainty because of delays. We need more transparency in granting licences as this impacts investor sentiment.

Coming to the question of who is most likely to go belly up—I can say the challenges are very serious for most domestic players. All Indian carries except IndiGo have huge debt and interest burden. Jet might need another round of equity infusion by Etihad by next year. I will not rule out downsizing of operations, especially by SpiceJet, as it restructures its network. Clearly, there will be survival challenges for one or two carriers. The key is securing near-term funding.

I see more airlines rationalising capacity as promoters are unable to manage losses. And this could be a step in the right direction. IndiGo, already the largest domestic airline by market share, will continue to add capacity as per their business plan. Jet may also marginally increase capacity. But frankly, the airline industry needs to find capital to manage existing operations before any more expansion.

There is, however, a small positive thread to this tale: International traffic to India is seeing a double digit growth. Start-up airlines are hoping that the government does away with the rule that requires airlines to have at least five years of operating experience and a fleet of 20 planes before they are allowed to operate on these routes. This will surely give airlines breathing space, and drive growth in the short-haul international traffic.

The Tata Effect
The impact of the Tata-SIA venture on the domestic market will initially be limited. Like any project, the airline will take time to scale up and a full-service airline model will look to address a different market segment. International plans will truly be the key to making this work. The permission for international flights will depend on the government’s stand on the 5-year/20-aircraft rule. Pressure on the existing players will come only when the Tatas are able to scale up size and operations. At CAPA, we are concerned with the lack of transparency on regulatory clearances in India and remain uncertain about clearances for this project. The other big change that will drive airline growth is airport modernisation. But the big decisions will not happen until the new government is formed.

The most immediate visible change in the Indian skies, in the short term, will be the impact of the Jet-Etihad deal. The play will be visible to passengers from the summer 2014 schedule. Etihad has already announced doubling of capacity in 14 Indian cities. The Abu Dhabi carrier is also beefing up its connections to the rest of the world. It has been among the most aggressive aircraft buyers this year. 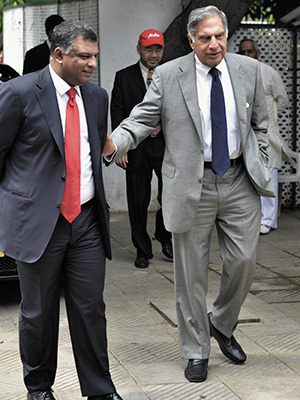 Image: Getty Images
The Tatas have stitched up joint ventures with Singapore Airlines, and Tony Fernandes’s (left) AirAsia
To my mind, one of the biggest challenges for the next government in the airline sector will be dealing with policy issues around granting more rights to foreign airlines to fly into (and out of) India. Since we have embarked on the path to opening up the skies, it will be tough to deny more rights to airlines like Emirates and Qatar Airways. The decision to allow foreign airlines to invest in India is indeed a significant one. The impact will be more visible and meaningful as our economy recovers and political stability returns. Right now, investor interest is very thin, except for some middle-eastern carriers. Much of it depends on how soon the Jet-Etihad deal goes through. We surely expect similar investments in Indian carriers to be structured in the coming years, where investments are linked to bilaterals and deeper market access.

The 1000-pound Gorilla
By our estimates, Air India lost close to $5.75 billion in the last five years. Though its financial performance and customer service has improved, debt is high and it is still a long flight away from profitability. We think a decision on Air India’s future will most likely be taken in 2014-15. I cannot see how they can continue funding Air India, especially since its own finances will remain under huge pressure.

AI’s entry into Star Alliance will surely improve revenues and drive growth but it may have come too late in the day as rival airlines are moving much faster in terms of driving alliances and strategic growth. Middle-eastern airlines are using innovative ways to grow their network, and threaten to upset any gain for India’s flag carrier. With more liberal bilateral agreements, the airline can no longer be as competitive as is required for them to turn around.

On the domestic front, we think growth will remain constrained at least till the end of 2014. So, our take is moderate domestic growth but over 10 percent international growth. Given this situation, domestic airlines are likely to continue making losses till the cost structure is addressed.

More Foreign Airlines
In the near term, I see one or two more FDI deals in the existing airlines and another new greenfield start-up with a foreign airline as an investor. Sadly the ground realities reflect deep pessimism in the sector, and this is largely due to a disoriented policy and regulatory framework. The regulatory process to clear projects is very slow and the government seems to be in no hurry to fast track clearances.

Despite allowing FDI by strategic investors, aviation continues to be managed in an ad hoc manner. What is worse, there seems to be little desire to improve it. One of my big concerns is safety. The Director General of Civil Aviation (DGCA) remains challenged and this is our biggest concern. Even when growth resumes in the next one or two years, can the regulator keep up? Key operating departments in the agency are under-resourced and there is shortage of expertise across functions.

Not so long ago, the Federal Aviation Administration threatened to downgrade India. Though we averted this due to political pressure and by incorporating cosmetic changes, our safety concerns are real. The worrying part is that there is no plan in place to strengthen air safety. A white paper on the key challenges in DGCA can bring to light the severity of the situation. The DGCA needs stable leadership at the top and, perhaps, a non-civil servant to head it. The government should think of bringing in professionals, maybe even get an expat to head it.

Tweets by @forbesindia
Will Narendra Modi Make It in 2014?
Can Spain Beat the World Cup Jinx in 2014?