The road to Delhi will severely test the Gujarat chief minister but, mentally at least, the ever-flexible Indian establishment is readying itself for a possible Modi-led government in Delhi next summer 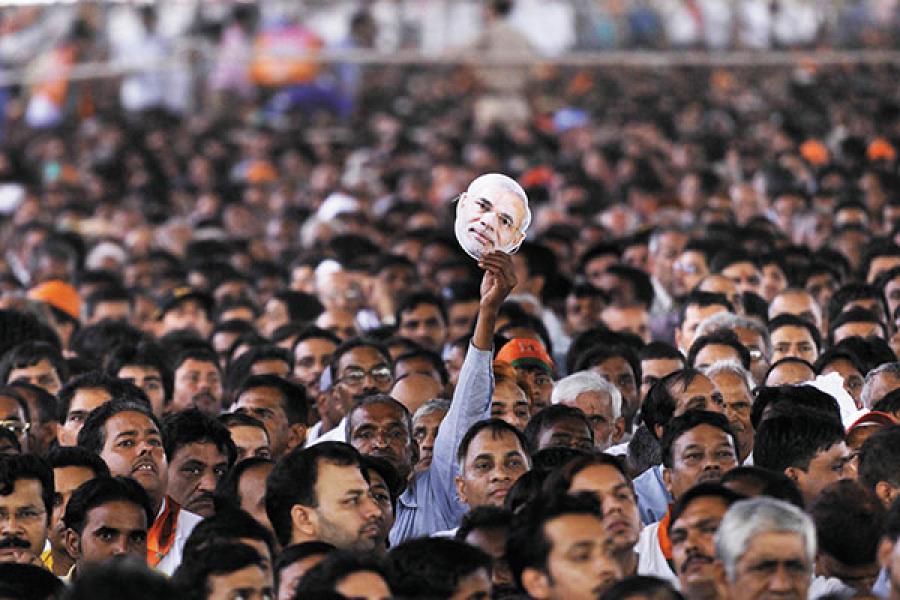 The very idea and, indeed, the belief that Gujarat Chief Minister Narendra Modi is within smelling distance of the prime ministership of India is relatively recent. Although a small group of devoted Modi fans have been doggedly propagating his relevance outside Gujarat, the establishment groupthink in India was equally dogged in rejecting the suggestion out of hand.

Till the BJP made its landmark announcement on September 13, 2013, proclaiming Modi as its candidate for the top political job, there were two beliefs that appeared to dominate. The first centred on the belief that the established leadership in the BJP and, for that matter, the RSS would never give Modi any position of extraordinary importance. His popularity among the foot soldiers was acknowledged but this was offset by the associated fear that Modi would overshadow the rest of the leadership.

Secondly, the sceptics were insistent that Modi was a ‘divisive’ leader who, apart from rallying the faithful, would prompt a counter-polarisation that would be to the advantage of the Congress and its ‘secular’ allies. This assessment appeared credible when Bihar Chief Minister Nitish Kumar walked out of the BJP-led alliance rather than accept Modi’s leadership.

It is remarkable that in barely three months the discourse has altered dramatically. Today, as speculators take long positions in anticipation of a Modi victory in May 2014, even the Congress is now convinced that the man they thought was a paper tiger is actually turning out to be a juggernaut. The spate of mega rallies around the country and his whirlwind campaign during the four Assembly elections—and the largely favourable results— have contributed to the mood shift. Mentally at least, the ever-flexible Indian establishment is readying itself for a possible Modi-led government in Delhi next summer.

Since there is a tendency in India to swing from one extreme to the other, there is a danger of over-stating the Modi momentum. That the Gujarat leader is certain to contribute to a significant jump in the BJP’s Lok Sabha tally in 2014 isn’t in any doubt. Dramatic and unexpected developments apart, there is also little likelihood of the Congress retaining its position as the single-largest party in the Lok Sabha.

In 2009, the dramatic jump in Congress seats to 206 from 145 in 2004 owed almost entirely to three factors: Its massive haul of urban seats, a significant jump in Uttar Pradesh and sweeping victories in southern India, particularly Tamil Nadu and Andhra Pradesh. At the end of 2013, it seems that apart from a ray of hope in Karnataka, the same factors that contributed to its success in 2009 will trigger its demise five years later. As of today, the Congress may find it difficult to cross three figures in the 16th Lok Sabha.

The dire predicament of the Congress is certainly to Modi’s advantage. Yet, for Modi, the bar to success has been set very high. Atal Bihari Vajpayee managed to craft a stable government in 1999 after the BJP’s own tally touched 181. In view of the fierce likes and dislikes of his personality, Modi will have to take the BJP’s Lok Sabha numbers to beyond 200 (and another 25 or so for his NDA partners) to be in position to be prime minister. Short of these numbers there may still be a BJP-led government but Modi may not be prime minister.

Climbing to the top on Modi’s shoulders and then dumping him unceremoniously is a dream project of a section of the BJP which fears Modi more than it dislikes the Congress. However, while the plot has an undeniable ring of cleverness attached to it, it is also premised on the belief that an election result can be carefully regulated. 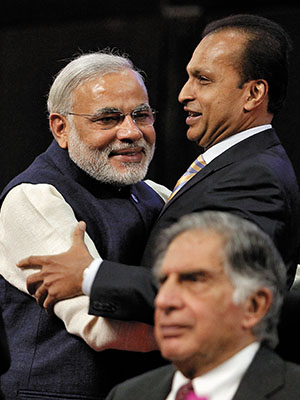 Image: Amit Dave/ Reuters
Modi with Anil Ambani and Ratan Tata at the inauguration of the Vibrant Gujarat global investor summit at Gandhinagar
Present indications are that if Modi is able to shift the focus of the Lok Sabha election from constituency battles to a contest for the top job, he will be the most successful. Disaggregated data from the more credible of the opinion polls suggest that Modi’s personal appeal is significantly higher than that of the BJP. The polls further indicate that whereas Modi’s personal appeal has a national spread, the BJP’s ability to convert that goodwill to victories extends to some 295 seats, with the other existing NDA partners adding a further 30 seats. The conclusion is inescapable: To win, Modi and the BJP must have a spectacularly high strike rate in their traditional areas of influence.

The belief that the effects of a north-western downpour (as it happened on December 8, when the Assembly election results were announced) will be offset by a south-eastern drought makes sense only if the Congress is the principal player in the areas where the BJP has no footprint. As of now, it would seem that the main beneficiaries of anti-UPA sentiment in the east and across the Vindhyas will be regional players such as Mamata Banerjee, Naveen Patnaik, Jagan Mohan Reddy and J Jayalalithaa. Modi has to create enough of a national momentum for some of the regional players to endorse him, either overtly or covertly.

Although predictions are hazardous in politics, the present trends seem to indicate that the chances of a Modi-led government at the centre in 2014 are extremely high. However, such a dispensation is almost certain to be a multi-party coalition with many important ministerial portfolios being held by representatives of the larger regional parties.

This has important implications. Modi’s rockstar like appeal may well stem from his ability to invoke the aspirational urges of Young India and his underlying promise to deliver a more wholesome political culture. However, unless he can generate a visible wave in his favour and emerge from the general election with a measure of unequivocal personal endorsement, his ability to meet the lofty expectations of his enthusiastic supporters will be constricted.

It would be unrealistic to believe that a Modi administration will instantly remove the remaining vestiges of socialism and lead India towards a free market dispensation. In terms of what are commonly referred to as big-ticket reforms that include the deregulation of the entire financial sector and labour flexibility for the manufacturing industry, the Modi impact may not be dramatic. Where it is likely to be more pronounced is in an improvement in the ease of doing business in India. Going by what he has done in Gujarat, Modi will focus on lessening the discretionary powers of the government, making rules transparent and predictable, and removing archaic government control over enterprise. Coupled with a renewed thrust on infrastructure, the overall business environment in India may show a sharp improvement.

In terms of orientation, Modi is unique in that he is the first genuinely popular representative of the economic Right in India. This suggests new possibilities for the future evolution of Indian politics but it also implies that Modi will encounter fierce resistance from an intelligentsia and a political class that is steeped in the Nehruvian consensus.

I don’t believe that secularism and democracy will set the terms of confrontation, but economics will certainly feature high on the agenda. Modi’s real test of resoluteness will happen after he is able to clear the high bar that has been set for him in the electoral arena.

Tweets by @forbesindia
5 Significant Decisions by Global Powers Due in 2014
Who Will AirAsia India and Tata-SIA Send Packing from the Indian Skies in 2014?