Thoughts on losing it 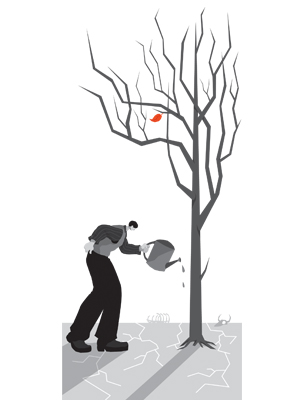 You just need to be nice to yourself sometimes after a loss.
—Venus Williams

It’s so much darker when a light goes out than it would have been if it had never shone.
—John SteinBeck

Take care to sell your horse before he dies. The art of life is passing losses on.
—Robert Frost

I’m only rich because I know when I’m wrong. I basically have survived by recognising my mistakes.
—George Soros

And this is the will of him who sent me, that I shall lose none of all those he has given me, but raise them up at the last day.
—John 6:39

If you have trouble imagining a 20 percent loss in the stock market, you shouldn’t be in stocks.
—John C Bogle

Even being right three or four times out of ten should yield a person a fortune if he has the sense to cut his losses quickly on the ventures where he is wrong.
—Bernard Baruch

Absence is a house so vast that inside you will pass through its walls and hang pictures on the air.
—Pablo Neruda

Though it is right to be prepared for the worst, there is no occasion to look on it as certain.
—Jane Austen

We had a kettle, we let it leak: Our not repairing made it worse. We haven’t had any tea for a week… The bottom is out of the universe.
—Rudyard Kipling

Mostly it is loss which teaches us about the worth of things.
—Arthur Schopenhauer

There’s a bit of magic in everything, and some loss to even things out.
—Lou Reed

It’s only after we’ve lost everything that we’re free to do anything.
—Chuck Palahniuk

Despite your best efforts, people are going to be hurt when it’s time for them to be hurt.
—Haruki Murakami

You’ve got to get to the stage in life where going for it is more important than winning or losing.
—Arthur Ashe

“No valleys, no mountaintops.”
—BC Forbes

Tweets by @forbes_india
Does competition make us more creative?
Fawad Khan: An actor & a gentleman