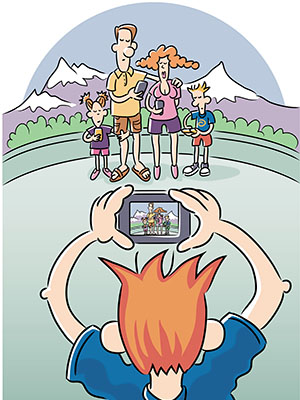 Whenever summer rolls around I begin to realise that I’m a complete and utter book snob. In relation to reading, I have absolutely no guilty pleasures at all. No graphic novels. No murder mysteries. My summer read is really no different from my winter read. I know many bookshops and magazines would have me believe that our summer forays are different, but literature is literature, and unfortunately snobbery is snobbery.
Colum McCann

For me, the life of the angler is an almost flawless example of how not to have a good time.
Christopher Hitchens

What an odd thing tourism is. You fly off to a strange land, eagerly abandoning all the comforts of home, and then expend vast quantities of time and money in a largely futile attempt to recapture the comforts that you wouldn’t have lost if you hadn’t left home in the frst place.
Bill Bryson

On the preferred gender of her awaited third great grandchild: I don’t think I mind. I would very much like it to arrive. I’m going on holiday.
Queen Elizabeth II

There are good books, even great books, that you read happily but with a faint feeling of duty. Then there are the books, often less pedigreed, that you read in a haze of compulsion, as if their pages emitted a drug. Summer is the season for the latter.
Ben Dolnick

Everybody in 15th-century Spain was wrong about where China was and as a result, Columbus discovered Caribbean vacations.
PJ O’Rourke

The one thing that offends me the most is when I walk by a bank and see ads trying to convince people to take out second mortgages on their home so they can go on vacation. That’s approaching evil.
Jeff Bezos

To travel is to discover that everybody is wrong. The philosophies, the civilisations which seem, at a distance, so superior to those current at home, all prove on a close inspection to be in their own way just as hopelessly imperfect.
Aldous Huxley