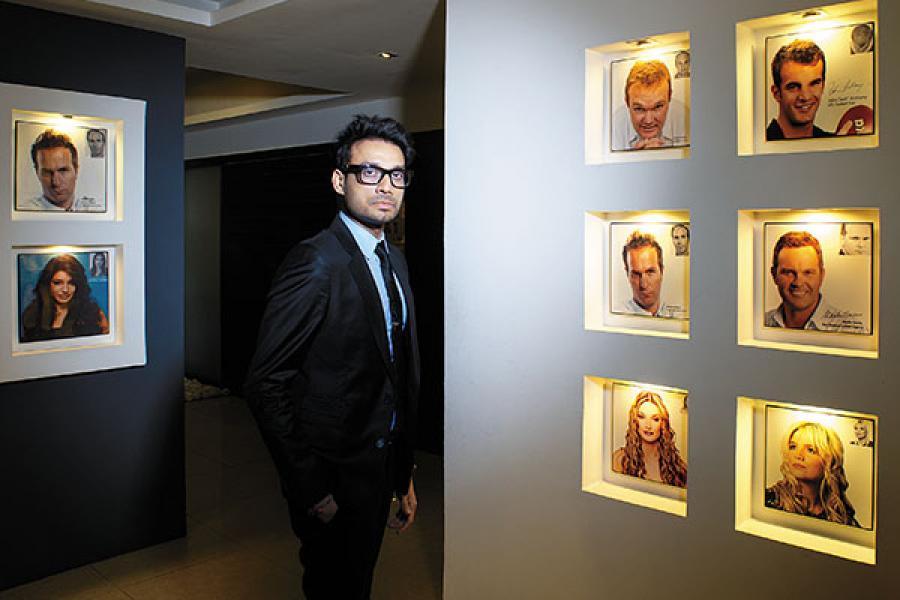 Image: Amit Verma
Sanket Shah, CEO of Advanced Hair Studio in India, is an example of the makeover that his company provides

Everything about Sanket Shah is well crafted, researched and rehearsed. And slick. It starts with his hair, dark and settled. Mention it to him and he waxes eloquent on its before-and-after story.

Shah lost his hair in his early 20s while he was studying in Melbourne. With his hair gone, he lost his confidence too. “I didn’t like the fact that girls were not looking at me,” he says. But, then, he had the next best thing: Money. And he decided to put it to good use. He went to Advanced Hair Studio (AHS), the Australia-based $2.3 billion hair replacement company that claims to be the largest in this business, for cosmetic treatment. They grew his hair and his self-confidence.

Aware that no before-and-after story is effective without photographs, Shah pulls out his iPad, the modern technological accessory of the travelling salesman. “See, that’s me before the procedure,” he says. The guy in the picture—dull, partly bald, somewhat tragic—looks nothing like Shah. “You can make out from the nose. See?” he urges. Of course it is him. You are suitably impressed.

Happy with the impact of his pitch, Shah keeps going, sharing before-and-after pictures of his clients: Bald, uncertain-looking men and women who transform into smart, confident people with a full head of hair.

Shah, too, is an example of this makeover. CEO of AHS in India, he looks like a man who has assembled his clothing from a fashion catalogue. There is the jacket, the expensive watch and shiny, pointy shoes. There is also the BMW convertible which he drives to work every day in Delhi. At 38, life is good for Shah.

From There to Hair
But despite the fancy trappings, the route to success hasn’t been smooth. Originally from Ahmedabad, Shah was expected to take over the family textile business, but he refused to live in his “father’s shadow”. Instead, he branched out on his own and started Planet Education in 1999. That business is largely on auto-pilot now. In fact, since the Mumbai studio opened in 2008, he has devoted 80 percent of his time to AHS. The reason for this shift in focus is simple: “Hair is like money. It’s never enough.”

He adds: “Make no mistake, we are for classes not masses—our target segments include the upper middle class and the wealthy.” He is clear that he doesn’t want to open multiple small outlets. His strategy has been to target the top end of the market through a small number of large (around 15,000 sq feet) state-of-the-art showrooms and generate big returns through after-sales service.

Shah went from consumer to seller in 2007, when he convinced AHS to grant him a master franchise for the Indian sub-continent and the Middle East. The company has successfully managed to leverage its global expertise to sell post-treatment products like hair fibres. Customers use two to three cans (each costing Rs 2,500) each month, which means AHS makes an average of Rs 75,000 each year even after the procedure.

Over the last five years, AHS India has grown to six outlets and 200 employees across the country. With 200 consultations a day (25 percent of them opt for treatment), and hair transplants costing from Rs 50,000 to over Rs 1 lakh, AHS in India says it has a turnover of about Rs 100 crore. It would be fair to say that he has done well.

Shah underlines the case for this business using statistics (from AHS’s own research) that paint a big, bald world. Between the 1970s and early 1990s, he points out, 33 percent of men and 6 to 7 percent of women were losing hair; 75 percent of people visiting AHS outlets across the world were aged between 40 and 60. Cut to the present and the numbers stand at 70 percent for men and 40 percent for women, with 80 percent of clients, even in India, aged between 20 and 40.  “The reason I brought AHS to India is because I lost my own hair,” he says, “I speak to clients with first-hand experience.” This is his impact message: I understand your pain. But I can help you. You could look just like me.

Age-Old Problem
Now we already know that hair loss can result from various causes: Hypertension, genetics, ageing, hormonal imbalances in both men and women. None of this is new. This inevitability, however, does not alleviate the psychological pain associated with baldness. Researchers have found that hair loss can lead to severe emotional anxiety and a lack of self-confidence.

Dermatologists-turned-cosmetic surgeons like those at Dr Madhu’s Hair Transplant Clinic in Hyderabad and Dr Sattur’s Clinic in Mumbai say their patients are almost always anxious and searching for a quick fix. “We get many patients who are turning bald at the age of 18 to 20. It affects them psychologically when they have to go out, apply for a job or get married,” says Dr Afroze at Dr Madhu’s Clinic.

Also, as Shah says, “in cities, due to the exposure through electronic media, people want to look their age or five to 10 years younger”. This makes people disregard the fact that balding is an age-old condition, says The American Hair Loss Council.

But those seeking a magic solution will be disappointed. If you are losing hair, there are only two things you can do. Take medication to reduce hair loss. Or undergo treatment to plant hair follicles (taken from the back or sides of your head) in the front of your head (where most men lose hair). “The problem is not hair loss but whether it will grow back or not,” says Dr Raman Sethi, a plastic surgeon (who also does hair transplant) at Rockland Hospital in New Delhi.

Air of Negativity
Notwithstanding the demand, the industry faces a stiff challenge: Baldness and hair replacement are almost taboo subjects in India. Though newspapers are full of ‘grow your hair back’ advertisements and AHS has brand ambassadors like former Australian cricketer Shane Warne, the general tendency is to stay silent. “We are an unfortunate premium brand because people don’t flaunt us,” says Shah. When they do talk about them, it is mostly to crib.

Where the communication does take place is online. People pour their hearts out on forums before undergoing expensive treatments. But even here, anonymous dissenting voices are shriller than endorsements. For instance, while Sachin Tendulkar’s wife Anjali and former India cricket captain Sourav Ganguly testify to AHS’s efficacy, hair-loss message boards are peppered with commentators who accuse the company of fraud, bent on selling pricey placebos and maintaining status quo through relentless marketing. “I got conned out of Rs 1 lakh just to worsen my condition,” writes one Kanwaljeet Singh from New Delhi on a forum.

Shah blames the negativity on ignorance. For instance, he says most people who visit AHS don’t know what they are getting into. “They think it’s a medical problem that doctors will solve,” he says. This is despite the fact that his clients have either studied abroad or travelled the world or, often, employ thousands of people and are worth crores. But then, this is a part of his job that he particularly enjoys —being the confidant of influential folks. “Educating a highly-educated person is a great high,” says Shah.

However, he cannot be unaware that a key reason behind the ignorance is relentless mis-selling. The hair industry stands unregulated and without a rule book. Dr Rekha Sheth, a dermatologist and founder president of the Cosmetic Dermatology Society of India, says this business needs dermatologists who can diagnose the exact reason for hair fall. “Hair fall is a medical problem. So the first step is diagnosis. But this is such a scattered industry that people can get away with any damn thing,” says Sheth.

Combine this with high expectations of patients and you can understand why things can go awry. Take, for instance, AHS’s advanced laser therapy. While it claims it can help hair growth, others in the industry believe it to be a marketing tool. “A laser treatment is nothing but a hypothetical exercise, its central idea being it will increase some blood flow in the cells. But it doesn’t work,” says Sethi. While basic laser treatment has proved harmless, there is not a single scientific study which proves it can help grow back hair, says Sheth.

Hair-makers Inc
But the number of takers is rising. Consider that 95 percent of Shah’s clients are affected by androgenic alopecia—a condition where hair loss takes place only at the top of the scalp and is caused by an imbalance in dihydrotestosterone (DHT) hormone. “Homoeopathic, allopathic and ayurvedic treatments cannot grow new hair on a bald scalp,” says Shah. At the same time, hair replacement surgeons cannot plant more than 10,000 strands between two or three sessions at a time (with each session being six to eight months apart). “The younger you are and the more acute your DHT problem is, the faster is the balding process,” he says. Someone who is 40 will go bald over a period of 10 to 15 years but someone who is 25 will go bald in just five to seven years.

With the problem so acute, the ‘solvers’ are spreading. Over the last three to five years, companies like Richfeel Health & Beauty, DHI, Berkowits Clinic and Dr Batra’s have expanded. Richfeel has scaled up via the number of outlets—most of them small. It started operations in 1986 and employs 600 people. Richfeel says its outlets gross Rs 75 crore in sales per year.

Unlike AHS, the company has a presence in tier-II towns as well. Seema Bhadoria, who heads trichology (a branch of dermatology that studies the health of hair and scalp) at Richfeel, doesn’t view AHS as direct competition because Richfeel sees itself as a holistic hair and scalp solution provider. “We are not into purely surgical solutions; Richfeel is for every hair problem,” she says. Berkowits, a Delhi-based chain, and Dr Batra’s are also different as they both look at hair loss in general.

Despite competition, AHS claims to be the largest player in the surgical hair replacement market in terms of revenue. It believes that its bouquet of solutions is the differentiating factor. Additionally, AHS’s India services are priced cheaper than those abroad. “Though we’re a premium brand, we’re dealing in necessity, not luxury,” says Shah. In the UK, AHS charges Rs 360 (£4) per follicle; in India, they charge between Rs 60 and Rs 100 per hair follicle. “But we don’t compromise on quality,” he says. Shah adds that he isn’t rattled by the competition. “Some of my competitors have been there for 30 years but I have no hesitation in saying that I am giving them sleepless nights now,” he says.

Show More
Get the latest stories, videos, and podcasts from Forbes India directly in your inbox every Saturday
Thank you for your comment, we value your opinion and the time you took to write to us!
Comments 17