From aerospace parts to toys may seem like an unrelated diversification, but for Aravind Melligeri, there's a method and little madness 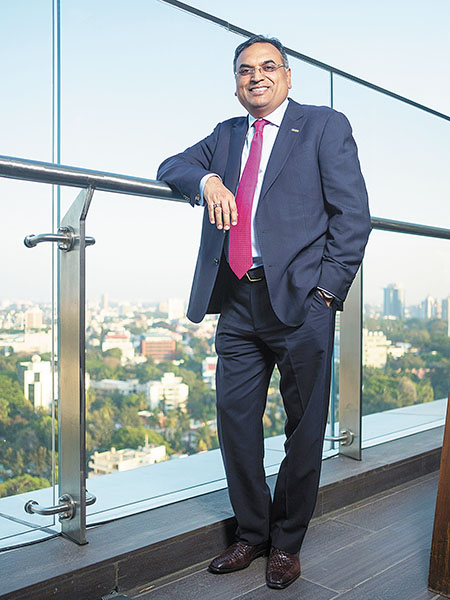 Aravind Melligeri, chairman & CEO, Aequs, Inc
Image: Nishant Ratnakar for Forbes India
Thirteen years ago, QuEST Global, an outsourced engineering services company co-founded by Aravind Melligeri and Ajit Prabhu in 1997, decided to foray into manufacturing products for the aerospace industry, mostly for commercial jetliners. Its goal was to be a one-stop provider of aerospace services and products. It was also a time when many Indian automotive parts manufacturing companies were looking at the aerospace vertical and QuEST, too, wanted to make use of India’s labour arbitrage and offer clients precision engineered products at a 30 to 40 percent discount as compared to manufacturers in Europe and the US.

In 2006, QuEST Manufacturing, a sister company of QuEST Global that was later spun off into an independent entity in 2010-11, made its first aerospace product, a high-end titanium box fitted into the wing of a Boeing 777, one of the most successful long-range wide-body commercial jets. “This box was holding an actuator [a motor system],” says Melligeri, a board member of QuEST Global and chairman and CEO of Aequs, Inc (QuEST Manufacturing was rebranded Aequs Aerospace in 2014 and is part of Aequs, Inc).

“Aravind focussed on growing manufacturing and to fuel his ambition and vision, much more capital was needed at QuEST. Unlike services [business], rules of the game are quite different [for manufacturing]. So we had to spin it off as a separate entity,” says Ajit Prabhu, chairman and CEO, QuEST Global, in an email. Besides, private equity investors in QuEST Global weren’t gung-ho about aerospace manufacturing.

Prabhu, who has no financial interest in Aequs and who knows Melligeri since his schooldays in Karnataka’s Hubballi, adds, “The phenomenal growth that Aequs has enjoyed is proof of what leadership and entrepreneurship truly mean.”

After the launch of the titanium box, Aequs Aerospace saw a slow but steady growth in its products, which include 200 individual parts of the landing gear bay [where the wheels of an aircraft rest] of the Airbus A380, the world’s biggest commercial airliner. “We grew very slowly. In 2011, we were $3-4 million in revenue,” says Melligeri, an alumnus of National Institute of Technology Karnataka, Surathkal, and Pennsylvania State University. “Volumes are low in aerospace. It may be a $1,000 part, but if you produced 100 parts a year it’s a big number.”

So, having a variety of products is what Melligeri focussed on and today his company produces nearly 4,000 different parts for commercial jetliners. “Literally, you can take any commercial jetliner and there will be some part that is from Aequs,” says Melligeri, who is now based in Houston, where he runs a small facility that manufactures tools for the oil and gas industry. “It is part of Aequs Aerospace and is less than 5 percent of our overall revenue.”

Besides Aequs Aerospace, there are other entities—such as Aequs Infra, which owns and operates a 250-acre manufacturing SEZ in Belagavi, Karnataka, and Aequs Consumer, a relatively new business vertical that manufactures toys for export to the US and Europe—that are part of Aequs, Inc. According to Melligeri, Aequs would end FY19 with revenues of about $130 million (₹920 crore).

“From what I know they are doing a damn good job,” says Gautam Maini, managing director, Maini Precision Products, a well-known automotive and aerospace manufacturer from Bengaluru, Karnataka. In 2005, the company forayed into the aerospace vertical, which today is a ₹100-crore-plus business that focuses on products for aircraft engines. “Overall, they [Aequs] are big and among the top,” he adds.

On February 21, at Aero India 2019 in Bengaluru, Aequs Aerospace announced it would manufacture “the structural assembly for the over wing doors on the Airbus 321neo aircraft”—the four exit doors of the aircraft— indicating it has moved up the value chain.

The structural assembly comprises machined aluminium parts that will be assembled by Aerostructures Assemblies India (AAI), a joint venture (JV) between Aequs Aerospace and Sweden’s Saab AB at the Belagavi SEZ. Deliveries will begin at the end of 2019. However, AAI wouldn’t be the first Indian company to supply doors to Airbus. That distinction goes to Hindustan Aeronautics Limited, which has been supplying the forward passenger door for the Airbus A320 aircraft for close to a decade now.

While the core strength of Aequs Aerospace is in machining, it has developed an end-to-end aerospace ecosystem at Belagavi through JVs with leading global players. For example, besides Saab, it operates a JV with Magellan Aerospace for surface treatment of machined parts, and it has a forging JV with Aubert & Duval. “The idea is to bring people with technical knowhow into the ecosystem. If not, we wouldn’t have a competitive edge. In machining, we are the largest. We do about a million hours of machining a year,” says Melligeri. “In aerospace, our goal is to achieve $300 million in sales by 2023.”  At present, the Belagavi SEZ houses 25 aerospace entities, including Aequs companies and its JVs, with nearly 70 acres still to be developed.

“Rare are such examples where spin-offs like this [Aequs] succeed to the scale it has,” says Prabhu. “I feel we are very lucky to have managed this transition [from services to products] in QuEST superbly.” And now, yet another transition is in the works with Aequs Consumer.

Around three years ago, a senior executive from one of the world’s largest toy makers visited the Belagavi SEZ to see its supply chain ecosystem. Intrigued by what he saw, the executive was keen that Melligeri create a similar ecosystem for toy manufacturing in India. “Our labour costs are one-third of China,” says Melligeri, noting that big toy manufacturers like Mattel and Hasbro source from China.

Similar to the Belagavi SEZ, Melligeri says, “We are setting up a toy cluster in Koppal, Karnataka.” This would also be a 250-acre SEZ that would be owned and operated by Aequs Infra. “To do anything in India you need an ecosystem. For toys, you need capabilities like mask-making, mould-making, and painting, which don’t exist.” In China, he says, an entire ecosystem around toy manufacturing has been built over the last four decades.

While the Koppal SEZ will become functional this year, Melligeri believes Aequs Consumer has the potential to be a $300 million business by 2025. And with the ongoing trade war between China and US, Melligeri’s SEZ could just be the balm that global toy manufactures are in need of.