Delivering googlies has become a way of life for Varun Chakaravarthy, the joint-highest paid IPL player this season 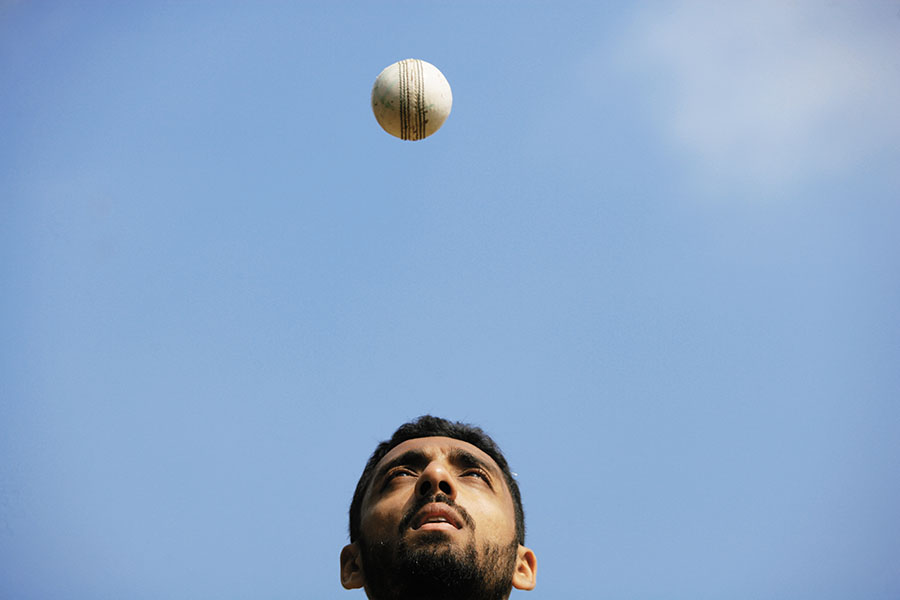 “Fear can do two things to you: It can either make you run away or run fast. I ran faster.”
Image: P Ravikumar for Forbes India
It was the turn of player number 37 to go under the hammer. Auctioneer Hugh Edmeades was getting ready to start the bidding for Varun Chakaravarthy, an obscure spinner in the world of cricket. With a base price as low as ₹20 lakh at the Indian Premier League (IPL) auctions in Jaipur last December, not many franchisees would have fancied their chance for this architect-turned-cricketer. Reason: Twenty-seven is considered old for an uncapped player to make a mark in a format that favours young talent.
However, the preceding auction of another uncapped player, Shivam Dube, who went to Royal Challengers Bangalore for a whopping ₹5 crore—25 times his base price—had set the mood slightly in favour of rookies who had not played for the national team. “The bid will start at ₹20 lakh,” Edmeades proclaimed. Delhi Capitals, formerly Delhi Daredevils, were the first to show interest. But for the next few seconds there were no bids.

Things, though, changed abruptly when teams started bidding furiously for Chakaravarthy. Delhi Capitals and Chennai Super Kings (CSK) locked horns to begin with. However, with CSK opting out of the race at ₹3.4 crore, Kings XI Punjab jumped into the fray. The frenzy continued as Rajasthan Royals (RR) and Kolkata Knight Riders (KKR) too tried their luck. Finally, at a staggering tag of ₹8.4 crore—42 times the base price—Kings XI Punjab snapped Chakaravarthy, who quit his profession at 25 to make a career in cricket. Harbhajan Singh, a veteran spinner who has played for CSK and Mumbai Indians in the IPL, welcomed him with a tweet: “This guy has the potential to play for India… selectors should keep an eye on him… he is a fast and furious spin bowler… another mystery spinner.”

Over two months after the auction, which made Chakaravarthy the highest paid player along with RR’s Jaydev Unadkat in the IPL auction, the lanky bowler is unfazed by the newfound stardom. “My life hasn’t changed a bit. It still revolves around cricket,” he says. The spinner, who has eight variations in his armoury, wants to stay away from the limelight. A couple of brands, which came up with lucrative endorsement offers, have been politely turned away. “I just want to stay focussed and play cricket,” he adds, as he gets on with his practice session at Guru Nanak College Ground in Chennai. 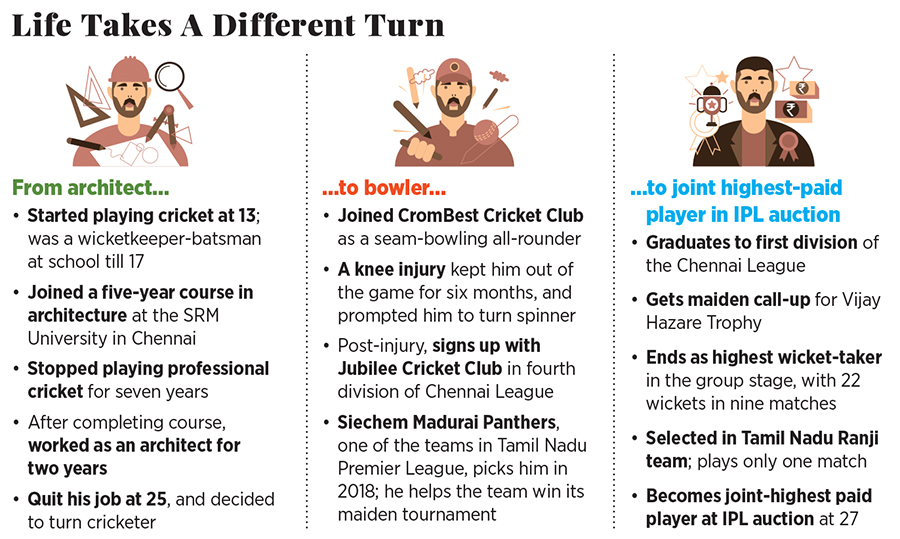 Chakaravarthy starts with an off-break, follows it up with a leg-break and googly. There are more lethal moves to fox batsmen: Carrom ball, flipper, top spinner, and a slider. “It takes two to three months to develop and master each variation,” he says. “You need to bowl for three hours every day, and do it continuously for three months.”

It might have taken a few months for Varun to master bowling these different deliveries, but it took him seven years to discover that cricket was his calling. “I realised quite late in life what I actually wanted to become. By then I was 25,” he says, recounting how he quit his job abruptly. “It was a leap of faith.”
*****
It was in 2015, towards the end of his second year at an architecture firm in Chennai, that Chakaravarthy realised he was not cut out for the job. “It had become a routine job. I was neither able to express myself, nor was I enjoying it,” he recalls. One fine morning, he walked up to his boss and handed over his resignation. “It was not planned. I didn’t even know that very morning that I would quit.” Everybody in office was stunned.  The sense of disbelief was set to get profound. Chakaravarthy called up his father and broke the news. “Initially he was shocked,” Chakaravarthy recalls. Friends and relatives too were startled. “They were more worried and concerned,” he says. For somebody who was 25 and had last played cricket in school, and sporadically in college, and had no professional background, the reactions to his decision were understandable.

Though he used to occasionally play with a local club, Magnet CC, during weekends—and ended up playing for another club, CromBest, in 2014 as a seam bowling all-rounder—he did not play professional cricket. Unfortunately, in the second match itself, Chakaravarthy injured his knees which required surgery. Doctors told him that he would not be able to bowl fast again.
What seemed like a body blow, turned out to be a blessing in disguise. Out of action for six months, Chakaravarthy decided to become a spinner instead. There was one problem though: He ended up bowling ‘fast spin’ due to his initial game as a seamer. There was another issue: There was nobody who would impart lessons in ‘fast spin’ to him. Chakaravarthy found an uncanny mentor: YouTube. “I regularly watched Anil Kumble’s videos on YouTube,” he confesses. Months of hard work and practice paid dividends.
Determined to give his best shot after quitting his job, Chakaravarthy opened up to his father, an employee with BSNL. “I asked for two years, and he agreed,” he recalls. “He always taught me that when one gets confused by multiple options, one must take the toughest path.”

In 2016, he joined Jubilee Cricket Club in the fourth division of Chennai League, and was soon billed as a ‘mystery spinner’ for possessing a slew of variations.

Rohit Damodaran, captain of Siechem Madurai Panthers, one of the teams in the Tamil Nadu Premier League (TNPL), was requested by his bowling coach to invite Chakaravarthy for practice sessions. “I played him first at the net, and ended up looking stupid,” recalls Damodaran, who also happens to be the owner of Siechem Madurai Panthers, and has been playing domestic cricket in Sri Lanka since 2014. Bamboozled, Damodaran asked his top batsmen to face the spinner. All of them struggled to read him. “He rattled everyone,” recounts Damodaran, who wanted Chakaravarthy to be part of the team. The team management, though, was not convinced about betting on a rookie who was part of another TNPL team in the second season, and had played just one match.

Damodaran, however, persisted and eventually in 2018, Chakaravarthy was picked up by Siechem Madurai Panthers, which had the dubious record of not winning a single match in the first two seasons of TNPL. “I knew he would be our X-factor,” says Damodaran, adding that his words turned out to be prophetic. Chakaravarthy played a massive role in Siechem Madurai Panthers lifting their maiden trophy. “You are a sitting duck if you are not able to read his variations,” grins Damodaran.
Success at TNPL opened the floodgates for Chakaravarthy. The spinner graduated to the first division of Chennai League by joining Vijay Cricket Club in 2018, and was again instrumental in helping his team clinch the trophy. Soon, Chakaravarthy got a call for the Vijay Hazare Trophy, where he continued with his impressive show for Tamil Nadu. With 22 wickets in nine matches, he ended up as the highest wicket-taker in the group stage. The next milestone was his selection in the Tamil Nadu Ranji Trophy team in 2018, where he played only one match.

What happened simultaneously was that IPL franchisees got a whiff of Chakaravarthy’s quirky bowling skills. He bowled as a net bowler for CSK for a few days in the 2018 IPL season, before the home matches of Chennai were shifted to Pune. Subsequently, he got call from KKR captain Dinesh Karthik to bowl at the nets. He also trialled with Mumbai Indians ahead of the IPL auction. It was, however, his fleeting interaction with South African spinner Imran Tahir that made him realise that he can graduate to the top level. Tahir too had toiled hard to make his way to the top and was a late bloomer himself. “That inspired me a lot, and helped me bowl well in the TNPL,” recalls Chakaravarthy.
*****

An average student—neither bright nor dull is how he describes himself—Chakaravarthy was always a backbencher in school. “I used to score around 60-65 percent and never attracted attention,” he says, adding that like any other child, he wanted to become everything. From aspiring to be a guitarist, a footballer and a doctor to an entrepreneur, the options were endless. Playing cricket, however, made him happy. It was to explore his creative side that Chakaravarthy decided to join a five-year graduation course in architecture from SRM University in Chennai.

Cricket though had been out of sight, and out of mind. “I never realised that not giving my 100 percent to cricket would come back to haunt me one day,” he recalls, alluding to his game in school. “I didn’t give my best, and I rectified it,” he says, referring to his two years of rigorous preparations, which culminated in his record-breaking IPL bid. “I was happy with ₹25 lakh,” he says about the first bid that he got from Delhi Capitals. Watching the IPL auction on television with his mother, a homemaker, and sister, Chakaravarthy had stepped out of the drawing room after the initial bid, content that he would be playing the IPL.

As destiny would have it, he was bought for ₹8.4 crore. The whopping figure, though, does not excite him. He also doesn’t bother thinking too much about success or failure. “I just focus on the process rather than thinking about the result,” he says.

This serene approach to life can be attributed to his spiritual leanings, and his WhatsApp display photograph, that of Sadhguru Jaggi Vasudev. When Forbes India asks him if he considers himself lucky to be selected in the IPL as the costliest player, Chakaravarthy responds with a shrug. “Nothing comes on a platter. One has to make it happen,” he says, mirroring Vasudev’s philosophy. “I don’t believe in destiny and luck.”
Chakaravarthy’s success, say cricket experts, reflects his strong will and mental toughness. “For somebody who started playing cricket so late in life, his laser-sharp focus has done wonders to him,” says KS Viswanathan, chief executive officer of CSK. “He is immensely hardworking, talented and hardly gets distracted.”

Though Chakaravarthy’s entry into IPL mirrors the debut of another spinner from Karnataka, KC Cariappa, who was signed by KKR for ₹2.4 crore—24 times his base price—in 2015, but didn’t have a memorable IPL outing, Viswanathan reckons that Chakaravarthy would live up to his billing: “He is fearless, knows how to handle pressure and is cut out for T20s and one-day internationals.”

Back in Chennai, Chakaravarthy gets ready for his IPL debut. Though excited, and a bit nervous, he explains his take on fear. “It can either make you run away or make you run fast. I ran faster.”