Flowers and food don’t always go well together: Once Vikaas Gutgutia realised that, he was able to give Ferns N Petals the push it needed. It now has 139 outlets in India and eyes on the global market 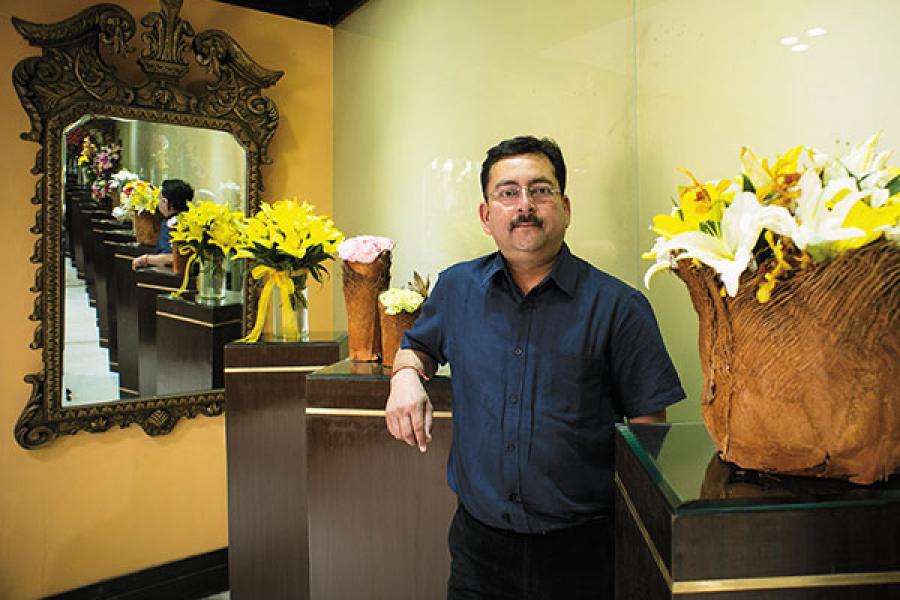 Image: Amit Verma
Gutgutia strove to make up for lost time and made a determined push to expand FNP without repeating any of the mistakes he made with Chatak Chaat

In 2006, Vikaas Gutgutia made a mistake—one that cost him Rs 25 crore. But although it was expensive, it was also invaluable, says Gutgutia, promoter of flower business Ferns N Petals (FNP). His failure taught him lessons that helped scale up FNP: It is expected to touch Rs 175 crore in revenues in 2013-14 from Rs 15 crore seven years ago.

Gutgutia made this strategic error a few years after breaking even at FNP, among the first endeavours at organising the otherwise neighbourhood business. “I had created a brand in the flower business. I thought if I could build one, I could also build another,” he says, explaining his next move. Gutgutia, a food lover, started Chatak Chaat, a retail chain which served street food in air-conditioned outlets with “assured hygiene”. But the attempt, the entrepreneur admits, “was disastrous”.

The problems were many. Primarily, though, the issue was that Gutgutia had bought a car but forgotten to hire a driver. “I just didn’t have trained staff,” he says. This affected quality. Though he opened outlets across Delhi, the business was hurt by a lack of standardisation as well as by the consumer’s unpredictable taste. He shut shop in three years. Gutgutia was set back by Rs 25 crore, a huge amount for someone who was once forced to sell flowers on the pavement and had struggled for seven years before turning his first outlet profitable.

But he saw the silver lining. A “restless man who wakes up every morning with new ideas”, Gutgutia strove to make up for lost time and made a determined push to expand FNP without repeating any of the mistakes he made with Chatak Chaat. The 44-year-old streamlined operations as the business grew, dividing it into 10 segments ranging from the wholesale trade of flowers to ecommerce to running a design school. Each of these sub-businesses was given a driver in the form of a vice president who reports to FNP’s Chief Executive Officer Pawan Gadia.

As of July 2013, the company had 139 stores across 61 cities in India, making it among the largest flower retailers in the world. Gutgutia claims he is the largest. The brand itself has become much sought-after for mega events such as billionaire weddings and big-ticket corporate events.

Similar attempts have been made in the Rs 2,500-crore flower industry, but only a few have succeeded. India, unlike developed markets, has not warmed up to the idea of buying only flowers as a gift—they serve as a mere accompaniment. Consequently, many of FNP’s peers have changed their business models. “We too had retail outlets but now only do ecommerce,” says Mahima Narula, business head, Flora2000. Apart from the cost factor, standardising design patterns and making bouquets look as good as in the catalogues was a tough ask across numerous outlets. “It is very difficult to control the quality in each and every outlet,” says Narula. While Flora2000 targets international customers, its sister unit Goldboxx is focussed on the Indian market and, along with flowers, has other gift items in its portfolio. But no one has gained a scale similar to FNP.

“There are other florists but he is the only one who has built scale in the business,” says fashion designer Tarun Tahiliani who has partnered Gutgutia to set up designer flower stores, FNP Tahiliani.

From Rs 30 crore in 2009, FNP clocked revenues of Rs 145 crore in 2012 with a net profit of Rs 13 crore. But Gutgutia is not complacent. “The real growth is still to come,” he says. “FNP is a debt-free company today; in the next two years we will be investing to expand our reach in India and in overseas markets.” It has already set up its first international outlet in Kathmandu this August. A bigger launch will take place in Dubai a month later, where Gutgutia is planning a series of events in premium five-star hotels. The first outlet, though, will only open in December.

Gutgutia grew up in Kolkata, spending time at his uncle’s flower shop after school. Even at that point, the budding businessman was not very impressed with the money being made. What he didn’t know, though, was that this experience was just a precursor.

In 1994, he had moved to Delhi after spending some time in Mumbai in search of opportunities. He had just finished college.

Soon after, what started out as a matter of the heart—frustration at not being able to find a quality flower service to deliver to his girlfriend—became a business opportunity. He saw the potential and opened the first FNP outlet in 1994.

It was a struggle. Rentals were high and handling flowers, which had a limited life, was difficult. Worse, not every customer was ready to spend 10 to 50 percent more than what a roadside seller would charge. A chance befriending with an executive from Taj Palace Hotel in Delhi, in 1997, changed the fledgling entrepreneur’s business model. He bagged the contract to supply flowers for a wedding at the hotel and that gave birth to what continues to be FNP’s largest and most profitable segment. Excess flowers from the outlets started getting utilised—a huge cost-saver. In fact, FNP has now become a “complete solutions provider” in the wedding segment, supplying lights, furniture and, of course, flowers.

As the first mover in a fragmented industry, Gutgutia was single-minded about saving costs and building volumes. To control the supply chain of flowers, he got into wholesale; to regulate design, he learnt the craft; and to keep a tab on the business, he set up systems and processes like MIS. Since then, says Gadia, “we have mastered the art of turning outlets profitable”. From the retail network today, 100 outlets are profitable, 20 are “on par” and another 20 are “struggling”, he says. Six months is the average time for an outlet to break even; if it doesn’t turn black in a year, it is shut down.

Even as they expanded FNP’s physical presence, Gutgutia and Gadia launched the ecommerce business. The online presence complemented and created demand for flowers in the outlets and also brought in higher margins. Meanwhile, they have also started stocking non-perishable gifting items that go well with flowers, increasing sales.

Despite the progress, the flower business still suffers from a problem similar to the Chatak Chaat experience. “Flowers are perishable and are often assembled. You can’t redo a bouquet, so a lot depends on the hands of the artists. The bigger question is how to standardise it,” says Tahiliani. This risk gets compounded as Gutgutia expands the retail network, making quality control an even bigger challenge.

In the initial years, to meet this challenge, Gutgutia had brought in traditional flower artisans from West Bengal’s Midnapore region to work at the outlets. But with the demand increasing, he set up FNP’s Floral Design School in Delhi. Some of the graduates are hired by the company and others join the hospitality industry.

Gutgutia has also had his hands full with the launch of express retail outlets. The company has opened up its wedding segment to franchisees. Later this year, it will become the first in the sector to introduce an ERP (Enterprise Resource Planning) system. Given this flurry of activity, does Gutgutia, who calls himself a maverick entrepreneur, itch to start another business? Not this time. “All my attention is towards making FNP a global flower company,” he says.