With a fresh take on product lines and stores, and its image, Bata India has been bringing customers back to the brand of their childhood 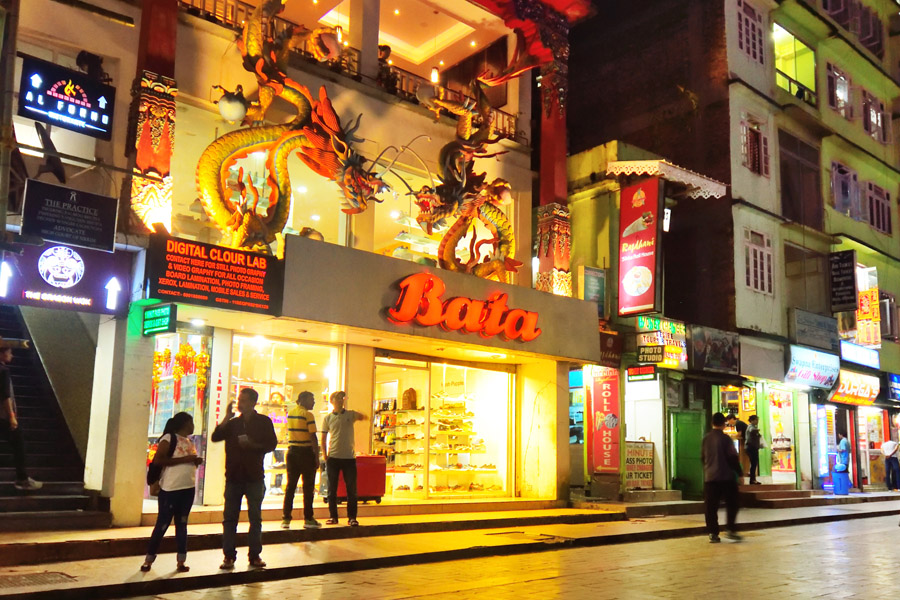 Besides its own and franchise stores, Bata is available in over 10,000 multi-brand outlets across India
Image: Shutterstock

Ever since Sandeep Kataria took over as CEO of Bata India in August 2017, one of his favourite jobs involves driving into a small town and asking for directions to the Bata store there. “And very often there is a Bata chowk in the town, where the Bata store is,” he says with a laugh. “So that itself is a nice, solid kick in the morning.”

It is the middle of the countrywide lockdown and like probably every other CEO in the country, Kataria has been planning scenarios and strategies for the omnipresent brand post-lockdown. But he is also glad to be doing something normal, like discussing normal times. Which at Bata India have been good—not just over the past few years, but also through the economic stasis last year.

During the financial year ended March 31, 2019, Bata India opened over 130 own and franchise stores, strengthening its already strong distribution network to over 1,500 exclusive stores in 600 towns and cities. It has also launched a store refurbishment drive across 500 selected stores. 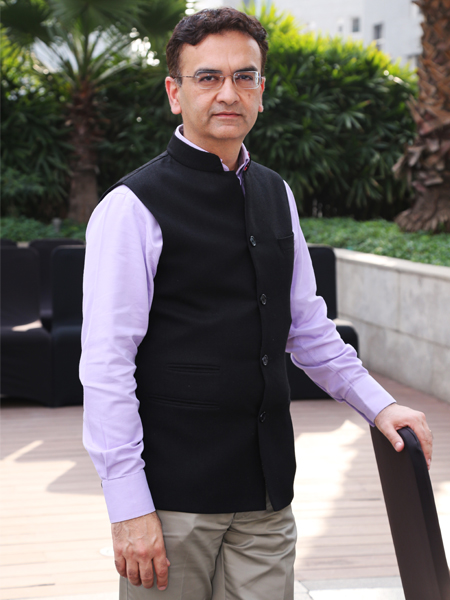 Companies like ours have seen wars, pandemics, people moving out... the reality is we will come out of it, and take the company’s strong position forward: Sandeep Kataria, CEO, Bata India

The changes started some years before Kataria took over. Around 2013-14, the company started bringing in new styles, more fashion and glamour pieces rather than the basic comfort wear the brand was known for, and upgraded its assortment, ensuring the design concept was in line with global ones. The stage for the reinvention of Bata India had been set and Kataria, who has earlier helmed big consumer-centric companies including Yum Restaurants, FMCG giant Unilever and Vodafone India, had his task cut out for the next stage—to get people to come into the stores to discover the changes.

“I was aware of all the good things that had been happening over the last few years,” he says about taking over at Bata India. “And we’ve been fortunate to be able to take some of that forward over the last two-three years. And take it to the consumers, to invite them back and show all the good work that had happened,” he says.

The company, he says, works in five-year cycles and for Kataria it has been a 2017-2021 plan, a lot of which reflected the global marketing strategy of “Sweeping Angela, or in India, Anjali, off her feet”. In other words, getting to know the ideal customer—Angela—and putting in efforts to create a ‘Bata world’ customised for her. The focus was on product lines and new designs, the store experience, advertising based on consumer insights rather than being fashion-led, and on distribution channels—brick-and-mortar and online. 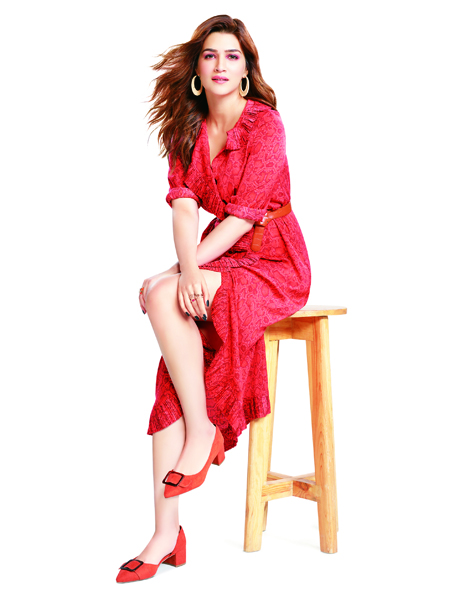 Though Bata has never been a brand focussed on the super premium market, it has upped its style quotient. And having an overseas pedigree— founded in the Czech Republic and headquartered in Switzerland—means Bata is able to make the most of the latest trends in fashion globally. “The biggest positive for us in India has been that we are able to, given our global MNC network [across 70+ countries], draw on the fashion trends, which we are then able to use and customise to Indian tastes,” says Kataria. The company’s 40-plus design team in India customises and innovates, and the company puts out 4,000 new articles every year.

Once the shelves were stocked, the next step was to refurbish the store. In 2018, soon after the launch of the ‘red store’ concept in Italy, the brand’s largest market, it was brought to India. In the same year, it also opened the world’s first Power store, as well as Bubblegumers and Bata Women stores.

Through it all, Bata has maintained focus on multi-brand outlets: Besides its own and franchise stores, Bata is also available in over 10,000 such outlets across the country. “The multi-brand outlets are relevant in smaller towns where a standalone store may not be economically viable. Finding the right partners in the field has helped us drive that part of the business, which has grown at 20 percent plus even in the current local stasis,” says Kataria. 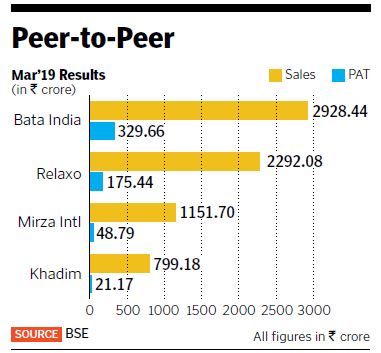 Along with being cost-conscious and using economies of scale, the company has also been active on the data and technology front. Since 2018, Bata India has brought all their stores online. “We know the inventory in each of our stores and were able to use that inventory more productively,” says Kataria. Inventory for online also includes a separate range and ecommerce delivery happens in about 1,300 cities and towns, contributing to about 5 percent of overall revenue.

The company has also been using insights from analytics to fine-tune where it wants to invest working capital even as it continues to look at opportunities for new stores and ‘right-size’ existing stores to ensure they are available in the right trade areas and malls.

In the brick-and-mortar world, the upgrades didn’t stop at merely stores. Taking it further, the company recently opened ‘Bata Experience Centres’ with services such as medicated pedicures, 3D foot scanning, customised insoles and a shoe spa.  The first of these, spread over 6000-sq feet, was opened in suburban Mumbai last year.

All of this has been accompanied by an ‘honest’ advertising strategy to also revamp the image of the brand—though Bata India could almost be said to be a part of the DNA of the country, with even millennials being aware of the brand thanks to having worn its school shoes or later Hush Puppies to work, the association remained at just that. In 2018, the company roped in actors Kriti Sanon and Sushant Singh Rajput as brand ambassadors for their women’s and men’s range, respectively, and cricketer Smriti Mandhana for their sports brand Power.

“In some ways it was pretty bold advertising,” says Kataria. In an advertisment, Kriti Sanon comes on the screen and says ‘Bata? But isn’t that school shoes’, and then ‘I thought I’ll buy some for my mum’. “This was literally her first five seconds on television, and we realised this while talking to her... this was indeed what they were thinking and therefore it was good for us to reflect it. Instantly, we were seen as authentic for our customers, and they were ready to give us a second chance, come back into our stores, discover the new assortment, the innovations, the technology that we were bringing into our product,” says Kataria.

In the advertisement, when Sanon sees the display, she goes on to buy two pairs for her mother, and 20 for herself. Since then they have built on the campaign—‘Surprisingly Bata’—and connected it to other sub-categories, from the men’s casual wear to their women’s 9 to 9 collection—a line that working women would find comfortable enough to wear to work and stylish enough for post-work outings.

For a company that for years was mostly associated with entry-level shoes, the strategies seem to be on point. Perceptions have changed and Bata has been attracting consumers, including the younger crowd, with its varied ranges, price points and brands. According to the company, Bata India sold 47.25 million pairs of footwear in FY 2018-19 and today more than a quarter of its revenue comes from premium brands like Hush Puppies, Bata Comfit, Naturalizer and Scholl.

“The average age of people that come into a store is dropping, which is a good sign for us, reflecting millennials coming into the store. But that is work we need to continue to do more,” Kataria says.

Brand consultant Harish Bijoor says Bata has  succeeded in revamping the image of the brand, but only to an extent. “It’s not been an overnight revamp. After having taken such a long time to test the waters, if they are confident enough they need to really make a disruptive piece (of advertising) happen now,” he says. “Bata needs to go on to the ‘Brahma, Vishnu, Maheshwara’ format—creation, they have already done, and have been running for a long time; nurturing, they have played that game for a long time. What they haven’t yet done is destroy the old bogey image of Bata.”

Meanwhile, as Bata India prepares to meet the upcoming challenges in a post-Covid-19 world, it’s the mix of the old and the new that will probably stand the company in good stead. “Companies like ours have seen the world war, we have seen pandemics, we have seen people moving out, we have had to change our headquarters a couple of times. So the reality is we will come out of it. It will end. And we should be able to take the company’s strong position as we go forward.”

The company had been drafting their next five-year plan but right now, the current one needs to be tweaked in line with the behavioural changes expected. “People’s habits are bound to change a little bit as we come out of it. Will people be ready to go back in big numbers to the big malls or the crowded areas? Maybe there will be some hesitation, so we need to look at that and fine-tune and tweak our plan as we go forward.”

(This story appears in the 22 May, 2020 issue of Forbes India. To visit our Archives, click here.)