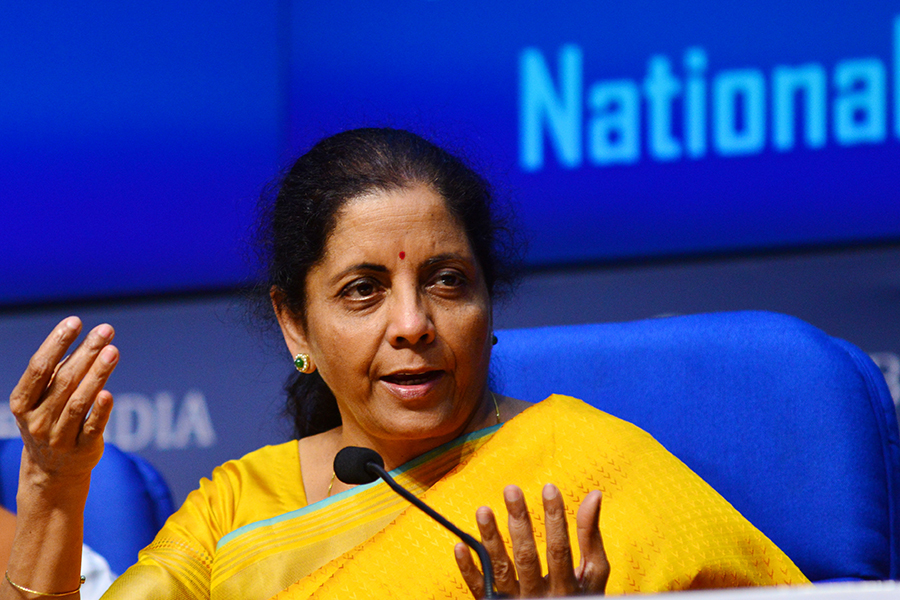 Image: Ramesh Pathania/Mint via Getty Images
Finance Minister Nirmala Sitharaman on Thursday announced the second tranche of measures, aimed to assist the low-income section of the economy, including migrant labourers, farmers and street vendors, who have been the hardest hit by the Covid-19 outbreak. For migrant workers, the key measure was a free food distribution worth Rs 3,500 crore in the form of 5 kg of rice or wheat per family and 1 kg of a pulse per person. At least 8 crore migrant workers who do not fall under the Food Security Act will benefit, Sitharaman said. “This will provide immediate succour to a critical issue, but the only caveat is that the onus is on the respective state governments to implement this programme,” Ranen Banerjee, leader, economic advisory services with PwC in India told Forbes India. The government also announced plans to launch a targeted rental affordable housing scheme for urban migrant workers, through a public private partnership and concessionaires. This scheme, experts said, could provide benefit to these workers over the longer term in terms of better living conditions, when they return to work. What it will need is assistance from various industries such as real estate, housing, construction and infrastructure, who are dependent on migrant labour force. Another key measure was to assist small businesses and street vendors, where the government has announced a two percent interest subvention on micro loans under the Mudra scheme worth Rs 1,500 crore. For street vendors, the plan is to introduce a lending programme of Rs 10,000 per vendor to help their businesses. Most of these vendors, who borrow at high costs from microfinance firms and money lenders, operate on low margins. But what this segment of the society needs is cheaper access to capital.
All the schemes announced over the past two days are part of a larger Rs 20 lakh crore support package, disclosed on Monday by Prime Minister Narendra Modi. On Wednesday, Sitharaman announced measures to help micro- and small businesses (MSMEs) which are starved for cash, steps to boost liquidity for non-banking financial companies (NBFCs) and tax measures for individuals and corporates. However, even during the second tranche announcements earlier today, Sitharaman continued to dodge some of the more critical and sensitive questions that the media posed, on how the government proposes to fund all these measures and how it will boost consumption demand. Barclays India, in a note to clients on Thursday said, “the actual fiscal impact of today’s steps will only be Rs 11,000 crore, which brings the total cost of additional incentives announced to Rs 665 billion (0.34 percent of GDP), accounting for steps taken yesterday as well  leaves the government with room for another Rs 1,24,000 crore of incremental spending.” Barclays has estimated that the government could end up with a fiscal deficit of near 6 percent of GDP during FY21. Sitharaman is expected to announce more measures in coming days, which would reveal if the government stands to face more fiscal pressure. On Thursday, stock markets responded with a thumbs down to recent measures, with benchmark stock market indices down over 2.7 percent each. Investor sentiment has been dampened after the US Federal Reserve on Wednesday warned of a threat of a prolonged recession. India’s Rs 20 lakh crore package would work out to be one of the largest amongst all big economies, amounting to approximately 10 percent of the country's GDP. Modi in his speech earlier in the week signalled the need for the nation to move towards ‘Aatma nirbharta’ (self-reliance), to grow in a world ravaged by the outbreak of coronavirus since the start of the New Year. Modi urged businesses and entrepreneurs to focus on producing more in India, referring to the Make in India project. “Be vocal [to support] local brands. That is our responsibility,” he said. Modi’s swadeshi (nationalist) call comes at a time when trade barriers are being raised across the world and political leaders have taken steps to protect their own economies and jobs for people, without being too reliant on one or two large economies for their raw materials or technological requirements.