More Truck For The Road

India’s transport industry has seen bad roads and weak trucks for too long. That’s about to change thanks to early risk takers like trucker R.C. Baid 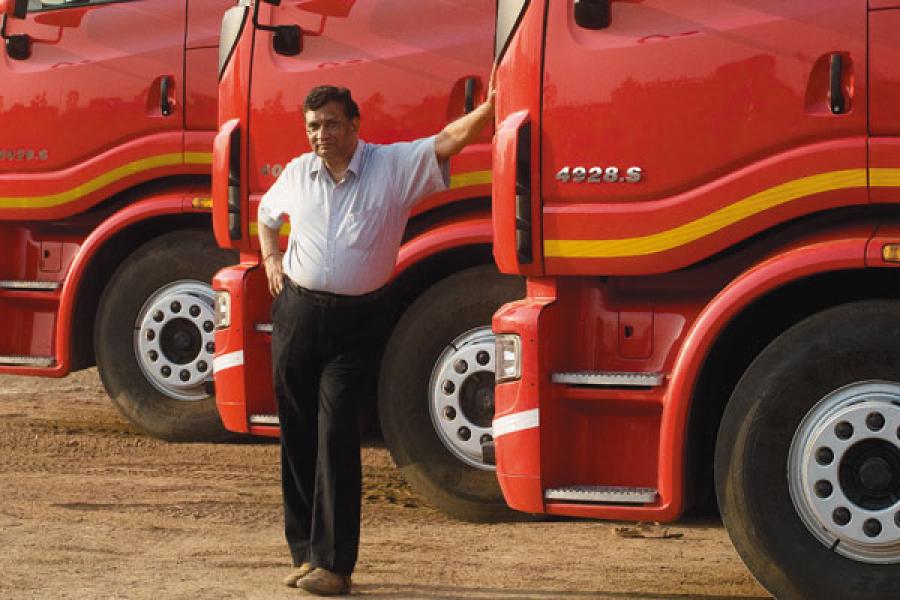 On the 8th day of the 8th month of the year 1988, AMN 2388, a Tata Motors 1616 truck carrying petroleum blew up somewhere in West Bengal. Such was the impact of the explosion that the railway bridge against which the vehicle collided came crashing down. Molten iron and 42 dead people lay there in a heap.

R.C. Baid can never forget that day. It was his second day in office. And AMN 2388 was one of the first trucks he had bought, from his savings, to start his own road transport business. The accident threatened to close down his venture.
Indian Railways sued Baid. The claim passed on to the insurers, New India Assurance. New India, in turn, sued the Public Works Department (PWD) claiming that the speed breaker on the location was too high and too close to the bridge. The PWD, in turn, sued Indian Railways claiming that the bridge was too low and that had caused the accident. As things turned out, Indian Railways didn’t pursue the litigation and Baid survived.
For someone who started off literally with a bang, Baid, 49, has made a lot of quiet progress. Siddhi Vinayak Logistics, a company founded by him in Surat, owns a fleet of more than 1,500 trucks. He has 20 of the top 30 blue chips as his clients: Tata Motors, Tata Steel, Essar Steel, Bharat Petroleum and Mahindra & Mahindra (M&M) are just some of them. And Baid says the privately owned Siddhi Vinayak crossed a net turnover of Rs. 200 crore last year.
But his beginnings were humble enough. Baid never went to school and got married at the age of 16. Like businessmen of a bygone era, he travels everywhere with a briefcase, speaking in broken English. He is also addicted to chewing tobacco. Two hours into our meeting and chewing his fifth dose of tobacco, he admits, “I am diabetic, suffer from high blood pressure and have problems sleeping at night.” Not the type of guy you would associate with the big transformation that the Indian road transport sector is witnessing today. The truth is, Baid is one of the handful of logistics businessmen driving that change.
For long, India’s truckers thought small. They operated low horsepower (HP) trucks that could cover no more than 300 kilometres a day. Even though India’s booming industrial growth created a demand for faster, more powerful vehicles so that raw materials could reach factories and finished goods reach consumers on time, the country’s abysmal road infrastructure wasn’t ready for the upgrade. The logistics industry is also fragmented and most of them are small players with limited capital. Repeated attempts by vehicle makers to launch super trucks have failed.
But Baid and a select few truckers are demonstrating that the time for the upgrade has come. Late in 2009, Baid ordered 100 trucks from Tata Motors at 285 HP and Rs. 31 lakh price tag each. By going in for trucks 60 percent more powerful than the ones already in his fleet, he was taking a big risk. The upfront investment and the costs of operation would rise significantly. This is the fear that holds back smaller truckers from experimenting with such heavy pulling vehicles. But then, why did Baid decided to take the plunge.
Baid says he hopes to recover his investment by running more trips with these faster and more powerful trucks. The roads have improved, especially in the last two years, and the industry is quite willing to pay a premium for faster delivery. If Baid succeeds, there is no reason why hundreds of other truckers won’t follow. Truck makers have already begun to respond to this unfolding change.

The Green Signal
Modern trucks with new engines, air-conditioned cabins and power above 250 HP are nothing radical or new. Multinationals like Volvo have tried introducing them in India before. But, the market wasn’t ready. “When we entered India more than a decade ago, we found that the infrastructure was not ready for high performance trucks. Which is the reason why the need for a niche market was felt and Volvo entered applications like mining and over dimensional cargo,” says Milind Kulkarni, who manages brand and communication at Volvo Trucks India.
A lot has changed since then. And heavy commercial vehicle makers believe that this is just about the right time to raise the bar. “Modernization is happening across all portfolios of life. In commercial vehicles also it was in a sense due. It’s just that here the dynamics are around operating economics and profitability. So you needed a certain environment of cargo or high-tonnage mining operation where high horse power trucks are required and then you need the infrastructure in terms of roads for them to be justified,” says Ravi Pisharody, president for commercial vehicles at Tata Motors. It helps that road-building has caught the fancy of the government. Minister Kamal Nath has pledged to award highway contracts at the rate of 20 kilometres a day. “Vehicles and the support infrastructure must go hand in hand. If there is lacking infrastructure then it doesn’t make sense to put the latest technology on the road,” says Ben Klaassen, managing director of TNT Express Road Network, one of the world’s largest logistics companies.
Even as truck makers started talking about high performance machines, Baid contacted his customers to know if they had the appetite for them. “We asked a lot of our existing customers like John Deere, TAFE, Tata Chemicals and Tata Steel if they would be willing to pay a premium for a fixed transit time. Most of them were willing only on the condition that if we failed then the normal freight rates would apply,” he says. Then, as soon as Tata Motors launched its global truck, Baid began trial runs for customers like Tata Steel and John Deere.
One trial run was between Tata Steel’s factory in Jamshedpur and Tata Motors’ plant in Pune, a distance of 1,800 kilometers. A conventional Tata 4018 truck would do it in six days. The new truck did it in just four. It was a resounding confirmation that the model would work. Baid went ahead and ordered the trucks.
His new Tata Prima trucks cover 700 kilometres as against 300 covered by the old ones. The quick turnaround translates into almost three times revenue from the new trucks. “While the variable costs are almost 40 percent higher for the Prima... the fixed cost is pretty much the same for both trucks. And when my revenue grows threefold while the cost increase is only by 40 percent, then I am making much more money on the Prima than on the 4018,” says Baid.
This might sound simplistic but there is a catch. The model works only if there is freight available at both ends and only if the Prima is on the road for more than 24 days in a month. “Otherwise this truck is a white elephant. If you keep it parked in your backyard rather than making sure that it spends most of its time on the road, then it can kill you,” says a Tata Motors official who doessn’t want to be quoted.
All told, India’s transport sector is far from achieving its potential. A lot of inefficiencies remain and it will be a difficult task for Baid to pull off his new strategy.
The truck makers are getting more active. Volvo has launched India’s most powerful truck yet, a 520 HP vehicle which can carry a maximum load of 200 tonnes. Mahindra-Navistar joint venture has lined up a 41-tonner and a 49-tonner, both offering 260 HP. Ashok Leyland will launch the universal truck platform very soon.
Tata Motors, which Baid turned to when he made his big truck move, is planning a 49-tonner. The upgrade to heavier vehicles is a complete shift from tradition for Tata Motors which had wanted to launch super trucks in India ever since it acquired Daewoo Motors’ commercial vehicles operation. The time wasn’t ripe earlier. “But with the economy growing, infrastructure improving and competition increasing, it is a necessity for Tata Motors to upgrade,” says a senior Tata Motors official. Tata Motors believes that customers like Baid are just the early adopters because they are enterprising and have a large business.
As bigger loads reduce the cost per tonne, the appeal of road transport will go up. “Now you will see trucks becoming as competitive as rail over long distances and a whole bulk commodity economy which has been the stronghold of the railways will begin moving slowly to roads,” says V.V. Rao, chief operating officer for transportation at Future Supply Chain Solutions.
Meanwhile, Baid continues to receive deliveries of Tata trucks he has ordered, about 15 each month. He is also getting orders from new clients such as engineering giant Larsen & Toubro and construction equipment maker JCB. As for his health, Baid has been lucky to be blessed by a Hindu holy man who gave him some sacred ash and assured him of good health for a long time.