The leading lady of Tailorman

Vidya Nataraj, born and married into retail business families, has given traditional trades an online route 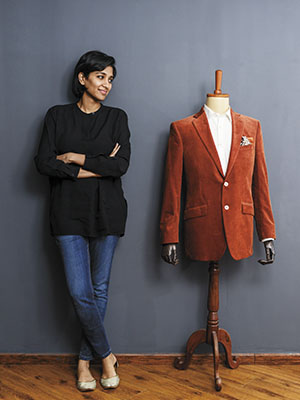 Image: Bmaximage
Vidya Nataraj, co-founder of Tailorman, is known for her obsession for detail

Inside the Tailorman store on Bengaluru’s 100 Feet Road in Indiranagar, the traffic noise is muted by Hindustani classical instrumental music. The three-year-old kid on the block, with its impeccably dressed store representatives, is in the company of the big daddies of men’s clothing and tailoring, such as the 90-year-old Raymond, and heritage American brand Brooks Brothers.

As soon as co-founder Vidya Nataraj steps in, she tells the store personnel that the music is not an appropriate fit; she’d rather have instrumental jazz, a playlist that she will work on later and also implement in the three other Tailorman stores in Bengaluru. “It has to be innate, right?” she says, as she settles down for a chat. “Some people are just not detail-orientated, while some people are!”

Tailorman—it specialises in made-to-measure formal menswear—is 34-year-old Vidya’s second venture in five years. In 2011, she co-founded online jewellery store BlueStone Jewellery and Lifestyle Private Limited, which has since received funding of more than $30 million from investors, including Accel Partners, Kalaari Capital and Ratan Tata. While Vidya remains invested in BlueStone as its co-founder, she is no longer operationally involved in its running.

Both startups are a result of Vidya’s passion for retail, an industry she is closely linked to, by birth and by marriage: Vidya is the second child of Nataraj Ramaiah, co-founder of the Chennai-based Landmark Ltd (in 2008, Trent Ltd, a Tata group company, bought over 100 percent in it), and is married to C Ganesh Narayan, the fifth generation heir and equal owner of C Krishniah Chetty & Sons, a 145-year-old family jewellery business.

Vidya’s eye, and near obsession, for detail, is something her Tailorman co-founder Gautam Golchha is all too aware of. “She is currently working on a logo design from which I backed out,” the 46-year-old says. “Well, what I thought was the end is now just the midway. Honestly, everything looks the same but she is going on and on about a thinner line, a broader line, a dot somewhere; she has huge stamina when it comes to detailing.” The reworked Tailorman logo is expected to be unveiled at the launch of the brand’s store in Hyderabad by the end of June.

Founded in 2013, Tailorman makes and custom-fits formal menswear, including suits, jackets, waistcoats, shirts and trousers by straddling ecommerce, retail stores, and personalised home visits. According to Vidya, competition for Tailorman in the $15 billion Indian menswear market comes from all quarters: Ready-to-wear brands such as Louis Philippe and Van Heusen, suiting brands like Raymond (homegrown) and Brooks Brothers (luxury), and city-specific players, such as PN Rao in Bengaluru, and local tailoring stores.

Vidya and Golchha are equal owners of Tailorman, which currently manufactures 2,500 pieces of garment per month. Vidya refuses to disclose revenue numbers, but claims they have a “positive net profit”. Although it has not raised any funding so far, the company is expected to grow from seven to nine stores, spread across four cities—Chennai, Bengaluru, Hyderabad and Kolkata—by June.

Ashish Jhalani, founder of eTailing India, an advisory firm focussed on the ecommerce sector, has been tracking Vidya’s two ventures closely. The similarity between the two, he says, is her ability to identify a product category that is not serviced well. He believes BlueStone’s timing was perfect: “India was just getting started with people shopping online for jewellery products and I think they have been able to make a name for themselves.” He adds that Tailorman, with its multi-channel approach, would also achieve similar success due to the lack of competition in the space, with the only like-to-like competitor being Creyate, a primarily online custom-clothing brand by textile major Arvind Ltd, launched in 2014.

A chance meeting in 2012 between Vidya and Golchha at a Bengaluru business event resulted in her approaching him and, after many meetings, conceptualising Tailorman.

For Vidya, the move from an online jewellery store to a multi-channel menswear brand seems to have been effortless. For her the end product doesn’t matter, “as long as it is retail and close to the consumer,” she says. “Retail is what I know best.” Gaurav Singh Kushwaha, CEO and founder of BlueStone, adds that her bias towards consumer retail is one of her strong points: “She has great insights of the retail space in general and it cuts across categories.”

Much of Vidya’s understanding of retail comes from having grown up hearing her parents talk shop. She was born in Colombo, Sri Lanka, where her father ran a successful garment export business; the family ran a host of other businesses, including production of palm oil. Landmark Ltd was an India venture between her father and his sister Hemu Ramaiah. Based in Chennai, Hemu was the driving force behind Landmark, although Vidya’s father held a 75 percent stake in the company. “I have grown up with that [retail background], so it is in my DNA,” says Vidya, who, after her schooling in Colombo, graduated with a degree in mathematics from the University of Warwick in the UK. After college, she joined Barclays Capital as an investment banker in London for a year, following which she returned to Chennai and joined Landmark as the head of the music division, a position that had been vacant. 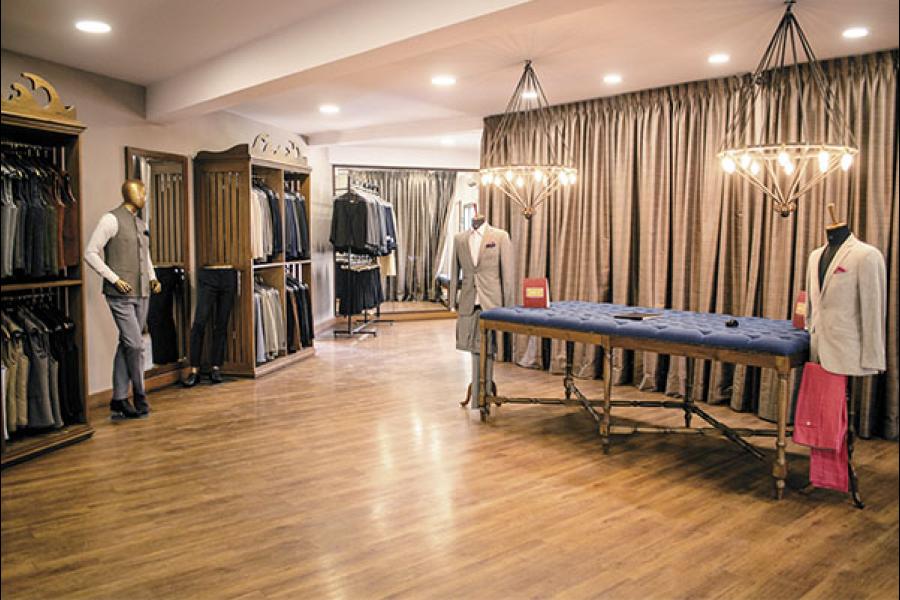 Tailorman is expected to grow from seven to nine stores, spread across four cities by June-end

Her work involved everything from merchandising to hiring to customer service. When she left Landmark in 2007, she remembers that the music division was roughly Rs 30 crore in size, clocking a CAGR of 30 percent since the time she had joined. “There were no maverick ideas that I can take credit for,” says Vidya. “It was a learning curve of how to run a strong and sustainable business—one that customers and employees love and something that you can grow profitably.” However, she is quick to add that the key takeaway from those years was watching how her aunt ran the business. Hemu Ramaiah had taken Landmark from being a single basement bookstore in Chennai in 1987 to a national retail chain of 18 stores, which employed 1,000 people and had revenues of Rs 225 crore. “When you have the founder—a person who is passionate about the product—running the company, versus a professional running the company, there is a big difference,” says Vidya. “You just cannot replicate the quality you see when a founder is running it.”

In 2007, Vidya left the family business to purse an MBA from Insead, in France, following which she joined auditing and consultancy firm PricewaterhouseCoopers (PwC) as a management consultant in Chennai in 2008, where she oversaw strategy and operations consulting for traditional South India-based business houses, from auto component to pencil manufacturers.

It was during this period that Vidya began to closely track the global ecommerce sector. While she felt that India was lagging behind, she was certain that when the time came for her to take the plunge, she would opt for a specialised vertical. “I believe that it is important to have a vertically specific business because that’s much more defensible in the long run,” she says. Her work at PwC carried on till 2011, which was also the year in which she married C Ganesh Narayan of the CKC family. A month before her marriage, she quit PwC and moved to Bengaluru.

It was after her marriage that Vidya got a bird’s-eye view of how a traditional jewellery business, which relies heavily on trust, operates. She also realised that there was a large market that traditional jewellery shops were not catering to. The increasing number of young, urban migrants did not have access to their family jewellers once they moved cities. And although Titan’s Tanishq is an option for some customers, it is the only pan-India brand. Added to this, there was a fundamental change in consumer behaviour: Women no longer want chunky gold jewellery; they want trendy, cheaper, stylish, and smaller pieces of jewellery, says Vidya.

About two months after her marriage, Vidya decided to address these gaps in the jewellery sector through ecommerce. This was the time when American online fine jewellery retailer Blue Nile had become a success and Vidya was sure a similar model would work in India. This is also the time when Vidya met Kushwaha, a computer science graduate from IIT Delhi and co-founder of entertainment portal Chakpak.

“We spent some time together and decided to start BlueStone,” says Kushwaha. The online jewellery startup was founded in July 2011, with Accel Partners and serial investor K Ganesh investing in it by the end of that year. In its first year itself, Bluestone reported revenues of Rs 30 crore. Currently, its annualised revenue run rate is around Rs 250 crore, says Kushwaha.

The birth of BlueStone, however, came with some degree of family troubles: Media reports in 2014 said that Vidya’s husband C Ganesh Narayan and his cousin C Vinod Hayagriv (both family branches have equal stakes in the family jewellery business) had fallen out over “ideological differences” regarding Vidya’s new venture.

Even though Vidya is operationally not involved in BlueStone anymore, Kushwaha credits her for having put in place a strong team.

“She is well-networked and goes out of her way to make sure that she meets the right kind of people, who can be valuable assets for the company, either in the short- or long term,” he says.

While Vidya redraws Tailorman’s brand logo, her focus over the next 12 to 15 months is to drive online traffic. At the moment, the spilt between online and offline sales is 20:80. The biggest challenge that she’s facing is in getting customers to be comfortable enough to measure themselves. (Tailorman’s made-to-measure offering requires customers to measure themselves and enter the data online.) “I think we need to invest more in technology and help a customer measure himself accurate enough to give a well-fitting garment,” says Vidya. The other challenge is the ever-shortening delivery time that customers demand.

Vidya is once again falling back on technology to see if a suit can be delivered in five days instead of the current 10. For example, measurements are fed into a design software that creates customer-specific patterns. These designs are sent to the factory, where the fabrics are digitally cut into shapes. In this process, there still exists a lot of human involvement, which Vidya believes can be eliminated by technology.

And although she admits that she has not given enough thought to the scale to which she would hand-hold Tailorman, her spirit of entrepreneurship remains securely in place. “An entrepreneur is always trying to do something that is either not there or something that is better than what exists,” says Vidya. “This concept is something that you just have to have.”