With surreal chandeliers and sculptural furniture, designer Barlas Baylar makes the most out of minimalism 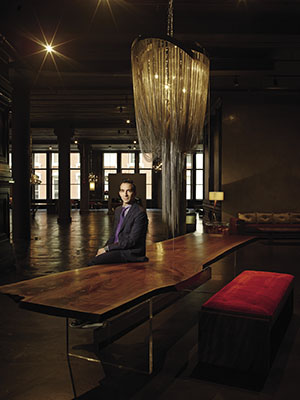 Image: David Yellen for Forbes
Take that, gravity: Baylar, in Hudson Furniture’s New York flagship, sits beneath one of his Atlantis chandeliers

“The best thing that happened to me is that I did not go to design school,” explains Barlas Baylar, the soft-spoken 40-year-old founder of Hudson Furniture. “I don’t design within the boundaries. Functionality isn’t my first thought—people are always saying, ‘Barlas, don’t forget about
Mr Gravity!’”

The schools he did in fact go to—in London and New York—were far more grounded: His undergraduate degree is in finance, and he holds an MBA in marketing. Baylar’s full-throttle mix of down-to-earth management and let-it-rip artistry helps explain his breakneck, three-year ascension from novice furniture salesman for Tucker Robbins to burgeoning design guru.

These days, Hudson Furniture manufactures its bespoke offerings in its own New York City workshops, but when it opened in 2004, “I didn’t have the funding to actually build the pieces,” Baylar recalls. “I was giving people sketches and wood samples—‘Look, here’s what I am capable of’.”

Still, the enterprise was, in his recounting, an instant success. His first client was Burberry, his second Tommy Hilfiger, both of which commissioned his massive, live-edge-cut walnut tables for their flagship store displays.

Then came the celebrities. “There I was, so nervous, a fish out of water, and Jennifer Aniston walks in,” he remembers. And the door has been swinging open ever since—Tom Ford, Beyoncé, Kanye West, and Catherine Zeta-Jones and Michael Douglas are among his clients. 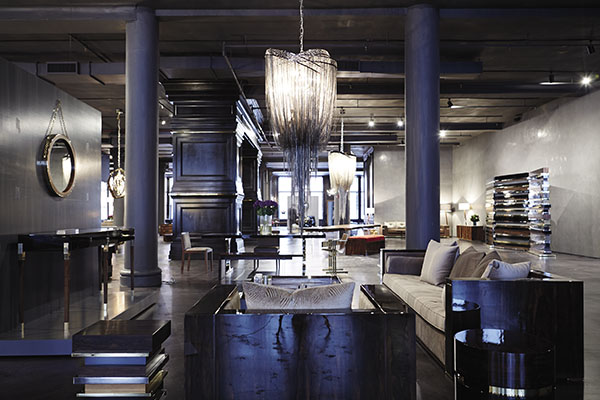 The pieces that first put the Istanbul-born Baylar on the map (and scored him 10 of his 30-odd design patents) were cascading chain-link lighting fixtures known as the Atlantis chandelier. Priced between $19,000 and $70,000, each Atlantis is unique but incorporates some three miles of fine, hand-draped, hand-cut chain. Baylar likens the effect to a waterfall or “those really dangerous deep-sea jellyfish”, but there is an opaque, veil-like feeling to them as well—think Mick Jagger on the cover of Goats Head Soup.
Hudson Furniture’s jewellery-like bronze-and-wood dining tables, geometric, high-craft Art Deco sofas and complex, futuristic consoles are now represented in showrooms from Singapore to Paris to Dubai. And Baylar is preparing to embark on his first larger-scale design partnerships, with Restoration Hardware and Italy’s design-forward Promemoria.

But he is still dancing a mad tango with the muse that brung him.

“I’ve been in the workshop all night finishing a massive chandelier, 650 pounds, and I’ve been tearing my hair out over it for 12 months,” he explains, sounding more than a little stressed about the $250,000 piece. “No, it’s good; it’s good... it’s just never been done before.” 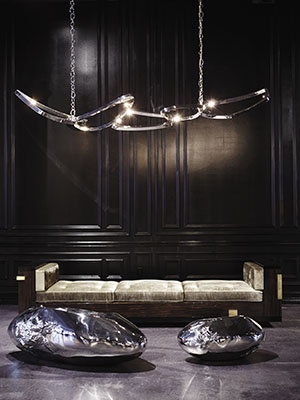 Set against the formal, jet-black moulded wall panels and dapple-grey poured concrete floors are sinuous slab-wood tables with legs dipped in bronze, strangely delicate lighting fixtures draped with cascading chain links, and what appears to be a pair of shimmering, silver egg-pods—objects that in another context might be surrounded by concerned but baffled earth scientists.

Still, it’s that 10-foot chandelier that Baylar can’t stop thinking about. “It’s made out of 13 or 14 blown-glass globes,” he says, “each around 40 pounds. The glassblowers had to hire people to hold their sticks while they were blowing, and four people were turning the glass. There are 300 miles of faceted chain. I also added laser-cut bronze globes—it looks like crumbling paper, the ends are splitting and everything has facets, and I have three-foot-long glass spears piercing the chandelier all over the place, and big bronze icicles, sparkling and drooping all over the chandelier.

“It’s sexy but, well, kind of scary at the same time.”