Suket Dhir is obsessed with detail and the emotional narrative. These attributes won him the International Woolmark Prize for menswear this year 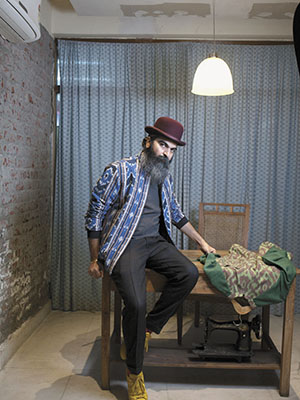 Suket Dhir likes telling stories. his words conjure visuals of the Jats of Punjab riding on Royal Enfield Bullets in crisp white shirts with epaulettes and two front pockets. His appearance is inspired by the same imagery: Long-haired, with a salt-and-pepper beard and a mischievous twinkle in his eyes.

His work, too, is a reflection of his raconteur personality: His latest collection, for instance, is influenced by his childhood, by the time he shared with his grandfather, running freely in the mango orchards of Banga, Punjab. The six looks he crafted were inspired by his grandfather’s immaculate dressing sense, he says. He’d wear a flawless white shirt and throw on a jacket. Even his pajamas were crisply ironed.

It is this collection that won the 36-year-old Delhi-based designer, on January 13, 2016, the International Woolmark Prize for menswear at Pitti Duomo, Florence—an honour previously received by Karl Lagerfeld and Yves Saint Laurent. Dhir is the first Indian to win this recognition in the menswear category; Rahul Mishra won the prize in 2014, for womenswear.

The narrative element in his work caught the eye of the jury too. Suzy Menkes, fashion editor for international editions of Vogue online, who was on the jury for the Woolmark Prize, mentions the reasons for selecting SuketDhir, his eponymous label, as the winner. “Even coming from different positions in the fashion world, we all agreed that emotion had to be at the heart of the selection,” she wrote on the Vogue UK website.

Dhir’s capsule collection of oversized ikat suits that combined Western tailoring with Indian detail won him AU$100,000. By March-end, the ensemble will be available in over a dozen of the world’s most prestigious stores, including Saks Fifth Avenue in New York and 10 Corso Como in Milan.

Image courtesy: Woolmark
Suket Dhir’s collection (left and right) that won him the International Woolmark Prize for menswear. The designer with the trophy (centre)
The transition from Banga to the fashion capitals of the world wasn’t a seamless one for Dhir. There were jobs at call-centres and mobile phone shops, as well as an uninspiring college education to contend with before FTV introduced him to fashion and led him to the National Institute of Fashion Technology (NIFT). Thereafter, there was little stopping him.

His work is known for its minimalist aesthetic, complemented by his obsession with detail and quality finishing. There is also a touch of whimsy. If you look carefully, you will be able to unearth the little secrets that are built into his clothes. The buttons on his shirts are sewn on with threads of different colours. The lining on his jackets is block-printed with quirky motifs such as umbrellas and parrots. His clothes, he explains, have a “nazakat” about them. “They are the kind of clothes that women would buy for their men,” he says.

SuketDhir retails out of Taj Khazana and Good Earth in India. Anita Lal, creative director of Good Earth, says, “What impresses me the most about Suket is his passionate pursuit of an idea. He juxtaposes his passion for perfection and detailing with playfulness in his designs. Suket’s commitment to his craft is beyond commercial concerns. He is a dreamer who is also a master of technique.”

Dhir has consciously steered clear of the money-spinners—wedding trousseau and womenswear. Instead, he chooses to reinvest revenue into upping the quality of his clothes: By using fabric of higher thread count or by replacing the cotton linings of his jackets with silk. This idealism, however, once brought him to an uncertain juncture. Money was scarce and he even toyed with the idea of winding up his business and taking up a job. Enter serendipity and “the unstinted support of well-wishers”. In January 2015, Raymond approached him to design their linen line—a collection of 75 ensembles in 25 days, for a show in Goa. This proved to be a turning point. A few months later, he was to become one of India’s nominations for the International Woolmark Prize. His concept for the contest, to spin a fine yarn from Merino wool, needed Raymond’s expertise, and they willingly obliged.

The silken yarn they spun in their facilities at Vapi (Gujarat) and Chhindwara (Madhya Pradesh) was woven into cool wool fabric in Vellanki, a village in Telangana. The kasuti embroidery on the jackets was done in Dharwad, Karnataka. The ombre-dyed silks for the lining fabric were sent to Sanganer in Rajasthan for block-printing. Once back, the “ensemble started coming together” in his workshop in Lado Sarai in Delhi. For the final round, Dhir commissioned the weavers of Burdwan in West Bengal to create a fabric as fine as mulmul with a yarn of finer quality.

At the heart of Dhir’s world are his relationships with people. “I like to keep my friends around me. I cannot work in isolation. I do go into isolation during the initial ideation process but I like to bounce ideas off my friends.” Asha Baxi, his mentor and former professor at NIFT, and Hiren Verma, a designer with Good Earth, along with Dhir form the core team. “His wife Svetlana handles his communications and his sister Stutii manages his finances. They have been a very good support system,” says Baxi. His approach has been key, she adds. “He does not like to compromise on his cut, fit and finish. In fact, he invests more in it. Many designers are focussed on the embellishment and the look, but they compromise on the details that you don’t see.”

He also shies away from the trendy ‘sustainable’ tag. “I do not want to be associated with it because I would like to have the flexibility of working with all sorts of materials. Sustainability for me is associated with longevity. Ensuring weavers are not displaced and that they continue making premium products, getting paid premium wages, involving their entire families, performing their specialised tasks, is sustainability for me. That’s an ecosystem we would not like to disturb.”

These beliefs “and all the energies of the universe aligning in the right way” have brought him this far, he says. And things are looking up. He’s setting up an online store and establishing a new facility to meet the growing demand for his work. Even though he isn’t a “young achiever”, he laughs.