Wipro’s IT business was underperforming and Premji held the co-CEO model responsible. TK Kurien, the new man in charge, has been taking some tough calls to get the company back on track 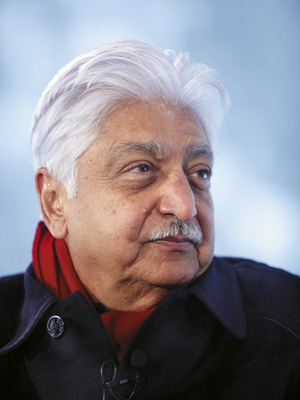 WHAT WE HAD SAID
On January 21, 2011 when news broke that Wipro’s co-CEOs of IT business (Suresh Vaswani and Girish Paranjpe) were quitting, there was disbelief in the industry. It wasn’t just Wipro that reverberated with the news but the shocks travelled all over the industry. Indian companies do not have the tradition of sacking CEOs, and Azim Premji (Forbes global billionaire ranking 41), who owns three-fourths of the $7 billion Wipro, wasn’t letting go of just one but two CEOs in the same day.

In a press conference at his company headquarter in Bangalore, Premji said, “I don’t think we should be making excuses. We have underperformed relative to competition, and relative to our potential as a company.”

Wipro’s IT business was growing slower than competition and it was clear that Cognizant, a smaller player, was set to overtake Wipro as India’s third largest offshore company. The IT business brings in over 90 percent of Wipro’s profits and Premji and the Wipro board were worried. The Board’s view was that the co-CEO model, which had been in place for 33 months wasn’t working. The logic was that since there were two captains running the ship, decisions were slow and therefore the business could not respond well.

Premji brought in TK Kurien, an uncomprising and tough-as-nails manager to head the IT business. Kurien’s mandate was clear: Do everything possible to put the business on the growth track.

(You can read the story here: Behind The Czar's Decree - What's Happening At Wipro )


WHERE THE STORY STANDS
And in the last year, since he has been at the helm, Kurien has done exactly that. Kurien is fully aware that he is feared and not terribly liked inside Wipro, but instead of impeding him, that knowledge has freed him to take decisive, some may say ruthless, decisions.

He has ruthlessly pared the number of senior managers, streamlined structures, and brought in new people at senior levels. At least two dozen senior managers, who could not justify the return on investment have either left or have been asked to go. In place of a complicated organisation structure, where horizontal, vertical and geography heads were selling to clients, Kurien has appointed new and younger client-facing vertical heads that are now empowered to take decisions. He has closely aligned the salaries of business unit heads to reflect business performance, customer satisfaction, and attrition in the teams they head.

How has all this effort played off? For the moment it is still work-in-progress, but some indicators suggest that Wipro’s performance has improved. For instance, in the quarter ending December 2011, it had six $100-million clients, from just one a year ago. The total number of active customers too has gone up from 880 to 953 in the same period. Operating margins have remained at 20 percent and quarterly growth has fluctuated. The business needs a few more quarters of growth to see if Kurien’s strategy is really working. Insiders say that while business is more streamlined, there is still a lot of tension and uncertainty about their own future in the company.

Even as Kurien works on stabilising and growing the IT business, Premji’s elder son Rishad has made his presence felt at Wipro as the head of strategy. The dominant view about Rishad is that he is smart, a quick learner and careful not to assert his position as the owner’s son. In media interviews in the past Premji has made it clear that Rishad will not take over as CEO of the IT business from Kurien. But people close to the company say that even though Rishad will not run the IT business, he will be appointed to the board and Premji’s ownership of the company will pass on to him.

In the meantime, Premji remains committed to his philanthropic work. In December 2010 he became the first Indian to make a donation of $2 billion to philanthropy through the Azim Premji Foundation. The Azim Premji University opened its doors last year and has enrolled about 100 students for masters’ degree in teaching and community development.