Will The Singh Billionaire Brothers Make It?

Billionaires Malvinder and Shivinder are relentless in their efforts to make Fortis Healthcare a global player. Will they succeed? 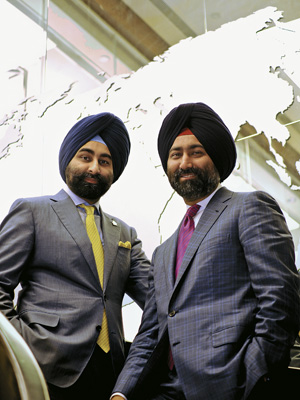 It was early 2010, and Fortis Healthcare’s board—chaired by the billionaire Singh brothers, Malvinder and Shivinder—was in session. One of the directors couldn’t make it to Delhi, and instead called in. At one point, Shivinder made a point and the director on the call interrupted to clarify, “Who is it, Malvinder [the elder brother] or Shivinder?” The younger brother immediately quipped: “It doesn’t matter, it’s the same.”

Although a fun anecdote, this incident throws light on the special bond between the brothers. In India Inc, where incessant family feuds appear to be the norm, Malvinder Mohan Singh and Shivinder Mohan Singh make an unlikely pair. Though their father and uncles fought over family jewels, the brothers have shown that it makes better business sense to hunt in a pack of two. And on the face of it, the brothers seem to be working well as a closely-knit team.

They have now set in motion a plan to make Fortis Healthcare the first truly global healthcare provider—something that no other organisation has been really successful at. Yes, there’s Singapore-based Parkway Pantai with a presence in seven countries and a capacity of 3,000 beds. But almost 70 percent of its revenue comes from within Singapore. In comparison, Fortis Healthcare currently has a presence in 10 countries and its revenue of $1 billion can almost be equally divided between its Indian and global operations. Even the world’s largest operator of healthcare facilities, Hospital Corporation of America, is confined to one country.  “In going global, Fortis is taking a huge risk… the brothers will either be called visionaries or end up in misery,” says an executive from the industry who didn’t want to be named.

Older healthcare players in India, including Prathap Reddy, owner of Apollo Hospitals, and their uncle Analjit Singh, who owns Max Healthcare, are happy to expand in the still under-penetrated $50 billion Indian market, which according to PricewaterhouseCoopers is worth $65 billion and is growing at a fast clip of 15 percent a year.

In the last year-and-a-half, Malvinder and Shivinder—flush with cash from their $2-billion Ranbaxy stake sale to Japan’s Daiichi Sankyo in 2008—scoured Asia and the Pacific region, snapping up hospitals and specialty clinics. Their growth has been relentless, but not without criticism. Analysts were concerned with some of their moves, especially Fortis Healthcare’s decision to buy its overseas healthcare business for $665 million last year. They think the price is too high.

They expect the brothers to reveal financial details of the international assets along with fourth-quarter results in two months. Perhaps, talks of an initial public offering to list the global assets of Fortis Healthcare later this year in Singapore, if true, could go a long way in clearing doubts over the valuation of these assets.

Malvinder and Shivinder, or MMS and SMS as they are called in the company corridors, are not new at being unconventional. Born two years apart, the siblings had identical early influences in life. Shivinder followed his elder brother to the same school, college and MBA institute. And despite the two-year age difference, for many, they look like twins with similar voices.

“At every transformational step we have taken, we have been asked ‘why?’,” says 39-year-old Malvinder. “When we exited Ranbaxy [sold to Japan’s Daiichi Sankyo for $2 billion], bought and sold our stakes in Parkway Holdings [Singapore arm of Parkway Pantai] and now when we have taken Fortis global; each time we have been asked ‘why’… I don’t blame the analysts for asking questions, but we are doing what is best for the company, which is to become a leading, international integrated healthcare player.”

Sitting beside him in the Singapore office of Fortis during a video conference with Forbes India is Shivinder, who says, “What we are doing is unconventional and because we are the first movers, this is unchartered territory. In the present economic environment, it is natural for the market to be risk averse.” Both reiterate that a year later, their moves will start making sense. Shivinder tries to explain this through a very Indian metaphor: “When two people marry, parents might have doubts. But once grandchildren come, they understand the value creation.”

Bhavdeep Singh, former CEO of Fortis Healthcare, agrees. “There is always a lag between vision and broad-based understanding. It will take care of itself,” he says.

Though acquisitions in India helped Fortis create in a decade what Apollo (one of the early movers) built in nearly three, the brothers see bigger opportunities abroad. “If India is a 1 billion population, $50 billion-plus market, the Asia-Pacific market, excluding Japan, has a 2 billion population and is valued at $500 billion,” says Malvinder. Moreover, adds Shivinder, “While Indian healthcare sector has made its mark in some verticals, it is still largely under developed in terms of capabilities. By acquiring overseas, getting access to high-end capabilities and bringing them to India, we can shorten the learning curve here.”

In March 2010, the brothers bought almost 24 percent of Parkway Holdings for about Rs 3,000 crore. This gave them an international presence, but more importantly, it helped them understand the Asian healthcare market and opportunities better. Within a month, the siblings quit from the board of their financial services firm, Religare Enterprises, and handed over the reins to close confidant Sunil Godhwani. They remain its majority shareholders. “Religare, while growing well, operates in a mature market. Fortis, on the other hand, is on a rapidly growing and transformational journey that needs an entrepreneurial drive,” says Malvinder.

But they had an unexpected setback within three months and had to sell their stake in Parkway when Malaysian sovereign fund Khazanah Nasional outbid them for control of the company. The brothers though had tasted blood and wanted more.

A string of acquisitions followed, and Fortis’s revenues leapfrogged from less than Rs 1,000 crore to almost Rs 5,000 crore in two years. The acquisitions range from a primary healthcare provider in Hong Kong to a dental major in Australia and a diagnostic centre in Singapore. “Each of these assets is profitable and is among the leaders in its home market,” says Vishal Bali, Global CEO of Fortis.

The brothers have now put in place a two-pronged strategy to create a truly global integrated health provider. One, they plan to cross-leverage clinical and management talent across boundaries. Something that’s never been tried before. A post-merger integration team from India is working with each country-CEO to prepare the local operations for higher growth. At the same time, medical practices will be shared between geographies. For instance, the highly-developed dental practice in Australia will share resources, including doctors, with its counterparts in India and other emerging markets.

Two, they are building a global supply chain. Each market has common requirements like syringes and through a single-negotiating point, they plan to bring costs down. For instance, if Fortis gets the best prices for gloves from India, it will buy gloves for its entire global operations from here. “We have already roped in a professional from Philips in Netherlands who was heading a similar function there,” says Bali.  Other plans include building a common back-end support service out of India.

While the strategy sounds good and logical, experts say executing it could be a different ball game, as Apollo found out when it invested in Sri Lanka and exited within a few years because of terrorism-related issues. Apart from political issues, there are two other major limitations. One, the doctor lobby and regulations in each country are strong and restrictive. Even in India, doctors from other countries are rarely given licences to practice. Two, Fortis in India has mainly been a tertiary player, mostly operating super-specialty hospitals that need fewer people.

“Does it have the bandwidth to not only handle post merger issues but also understand the different verticals it has got into?” asks an industry veteran, who didn’t want to be identified.

The bandwidth will be under even more strain as Fortis will have to match Apollo’s recently-announced ambitious plans in India if it is to stay in the game. Apollo hopes to add nearly 3,000 beds in the next two years, besides setting up medical colleges and broadening its retail pharmacy network.

Nevertheless, says Brian Tempest who has worked with the family since 1995 and now sits on the board of Fortis: “At this young age, the brothers have already accomplished what their father had in his lifetime. And they still have a long way to go.”

Tweets by @forbesindia
Heat and Mangoes
GM Rao: Fighting For His Dreams