GM Rao: Fighting For His Dreams

Like most infrastructure companies in India, GMR Infrastructure has had a tough time in the last several months. There is still a long way to go before the company can regain its balance on debt 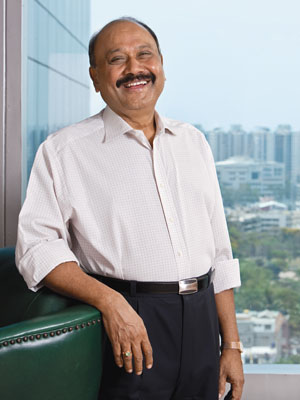 WHAT WE HAD SAID
Infrastructure in India has often been called the trillion dollar opportunity, yet companies in this business are struggling in red ink. GM Rao has fast tracked onto the infra-highway with his power, airport and roads business in the last decade. He grabbed all opportunities and built his business in India as well as overseas. But many of the big bets taken on the expectation of high growth, have not come through.

(You can read the story here: GMR's Shattered Dreams )

WERE THE STORY STANDS
In January this year, GMR Infrastructure, the eponymous company founded by Grandhi Mallikarjuna Rao (Forbes global billionaire ranking 683), issued a statement vehemently denying that it was taking on a $2 billion loan to fund the acquisition of Brazil’s Sao Paulo International Airport. The rather strongly worded denial was unusual for a firm that has thrived on news about its ambitious growth plans. It was also a reality check. Unlike four years ago, when any news about Rao’s interest in assets around the world resulted in his stock price shooting up, now even a hint of more debt on the books results in further trashing on the bourses. The markets have been merciless and so have other investors.

Rao’s is not the only infrastructure stock to be re-rated in line with global valuations for long-term projects, but the change in attitude has certainly puzzled the entrepreneur. “The market does not understand infrastructure,” he told Forbes India in a meeting at his Bangalore office last year. In December 2007, when he went to the market to raise $500 million in a Qualified Institutional Placement (QIP), bidders lined up to offer him over a billion dollars, which he gladly picked up. Capital was aplenty. Not surprising then, that Rao is today an inspiration for several others from his home state Andhra Pradesh. GMR Infra was then being valued not so much for its cash flows, but for the potential the projects had. Hadn’t we all experienced the six-hour power cuts? Someone had to invest in building alternatives to bad roads and smelly airports. Here was one man bidding for them all.

The picture has changed completely now. Margins are under pressure on his three main business segments—airports, power and roads. He was among the group of industrialists that met Prime Minister Manmohan Singh last month, asking for bottlenecks to be removed for the power business. Fuel supply and bankrupt state electricity boards are serious problems that remain unsolved. Articulating the group’s new philosophy, chief financial officer A Subba Rao says, “It is time now for consolidation, rather than looking for new projects.” He speaks about building cash flows and growing business only in a sustainable manner. This is certainly a change for a serial entrepreneur who came up in the classical mode. Rao had tried his hand at 28 different businesses over two decades, till he found his mojo at the end of the millennium.

From an asset base of less than Rs 50 crore in 1999, he moved into big league by bidding for and winning airport and power projects in India and overseas. The GMR group today operates assets of close to $5 billion (about Rs 22,100 crore) with projects worth about $6 billion more under construction. The real problem now is debt, which is close to Rs 17,000 crore. The airport regulator’s interim ruling on increasing passenger fees at Delhi airport from April is expected to improve cash flows. Rao has also managed to grab the Kishangarh – Udaipur - Ahmedabad road project, India’s largest motorway to be bid out so far, both in terms of value (Rs 7,000 crore) and length (555 km). But there is still a long way to go before the company can regain its balance on debt. Ambitious plans to build SEZs and to venture into the gas import business may well have to wait for some time.

Monetary policy too will play a role in easing the situation for the infrastructure business. Rao, who is now on the Reserve Bank of India’s central board of directors, is keenly aware of this. When we did a cover story on GM Rao’s situation, we called it the trillion dollar conundrum. For his story was a microcosm of most companies in the infra business in India. The big opportunity beckoned dozens of entrepreneurs who entered the business and they struggle to make it work. The picture remains much the same today, with very little movement in government policy. Meanwhile, opportunities beckon overseas. No wonder that Rao and company are still in the race for airports in South America.

Tweets by @forbes_india
Will The Singh Billionaire Brothers Make It?
Lakshmi Mittal: Waiting to Exhale