Effective bidding in bridge is a genuinely challenging task. Figuring out how to arrive at the best contract with opponents’ intent on making your life difficult by interfering in the conversation is enough to destroy well established partnerships. The contemporary bridge idiom required for consistent success is typically incredibly extensive and demanding. Not surprisingly, even the most legendary partnerships struggle to make the grade in mastering such complex methods. Yet if the effort is lacking, it is unlikely to foster the trust needed at the table that makes winning more likely. The major challenges in developing sound bidding technique relate to the use of bidding space, priorities in communication, eliminating ambiguity in description while preserving the merits of artifice!

At the risk of being called lazy, it is vital to point out that “systems” do not get you to great contracts – people do, using the system. If the system is incredibly difficult to fathom, places a huge strain on the memory and, therefore, tough to play at the table in all likelihood the gains will be crushed by the “accidental” losses. My bridge guru once said, “Just get the logic right and then express it in a way that partner cannot fail to understand”. Clearly, the importance of effortless recall, absolute clarity and total familiarity among both partners is fundamental to minimizing the room for error to creep in. Rather than putting the memory to test, time is far better spent exercising the imagination, calculating the odds in your favour and anticipating the consequences of your action. It also allows us to answer any questions asked by the opponents’ with confidence, eliminates the possibility of acquiring unauthorized information and helps to conserve energy for superior declarer play.

The hands that follow illustrate not only the myriad possibilities built into each deal but the need for flair and judgment as well. 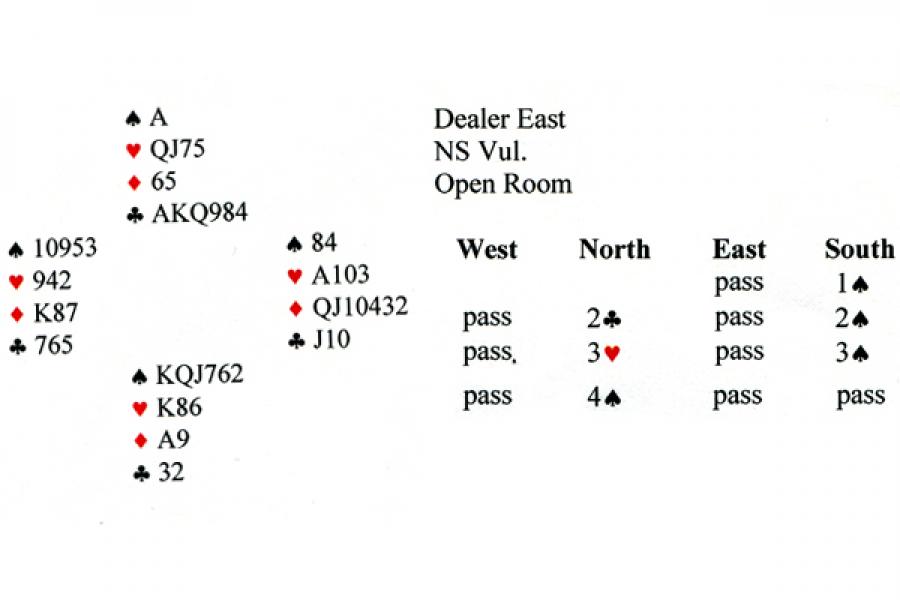 This deal came up on BBO in a Team match with both sides scrambling to get ahead. East, a competent player, chose to remain silent. Ironically, what seems like a fairly innocuous pass may well be the key to EW missing a high percentage slam. In fact, the grand slam is unstoppable if declarer plays the trumps right! South opened with a Multi 2♦showing either a weak two in one of the majors or a strong hand with 17 or more high card points & 4441 shape with an unspecified singleton. West appears to be caught between a rock and a hard place and elected to pass for the time being.

When the bidding came around to him again with his right hand opponent (RHO) suggesting a weak 2 in spades, he re-opened with a double. North can clearly be accused of being timid - 4♠ would be the popular choice. Or was he being wily, since the “rational” 4♠ bid may well give EW a sniff that slam is on? Should West press on with a 4♠ cue bid on hearing partner bid the game in hearts? A tough call but the odds certainly favour it given that the West hand is blessed with 2 Aces & 2 Kings. Even if East should turn up with wasted values in spades but has a four card heart suit headed by an honour and both minor suit queens, stopping at 5♥ should not prove to be a disaster. This hand from the league match between Italy and the USA in the 1959 World Championship must qualify as one of the luckiest slams ever made. Fishbein and Hazen seem to have stayed out of trouble in the Open Room with their pedestrian auction. With either spades or clubs as trumps, declarer can score 13 tricks if a heart is not led. However, the ♦ lead is lethal! In the Closed Room, the American East not to be intimidated by his renowned opponents, Giorgio Belladonna (S) and Walter Avarelli (N), made an intrepid 2♦opening. The 3♦ bid conveyed a power-house and Belladonna, keen to conserve bidding space, bid 3♠. On hearing partner bid 4♣, Belladonna made an imaginative 4 ♥ bid. The logic behind the 4 ♥ bid was that if partner was short in spades, he must certainly have heart length. Not surprisingly, Avarelli was happy to reach the little slam in hearts provided Belladonna possessed the ♦A. 5NT confirmed the Ace and Avarelli blissfully bid the slam in hearts, landing the partnership in the worst of the three suits. Except that 6 ♥ proved to be the only unbeatable slam!

The play was unexceptional by Belladonna’s superlative standards. He won the diamond lead, cashed spade Ace and followed it by cashing the three top clubs. When a dazed East ruffed with the ♥10 to prevent a diamond discard, Belladonna simply over-ruffed with the King. A high spade provided a diamond discard in dummy. The coup de grace was delivered when he simply ran the ♥6 to East. Curtains for the USA once again!

4,692
Thank you for your comment, we value your opinion and the time you took to write to us!