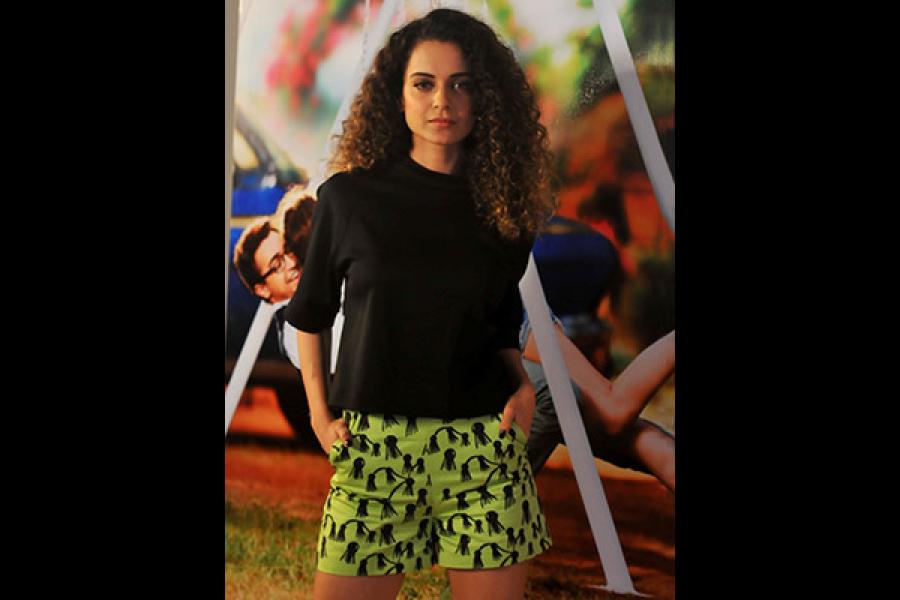 Almost a decade ago, Kangana Ranaut provided glimpses of her acting talent in her debut film, Gangster. But neither the purists nor the ardent movie watchers would have predicted her meteoric rise in the years to follow. On Monday, Ranaut bagged her third National Award and second in successive years – Best Actress for Tanu Weds Manu Returns (2015) – a phenomenal achievement for an actor who has barely completed 10 years in the Hindi film industry. To understand why her feat is remarkable, consider this: Neither Madhuri Dixit nor Sridevi has won the award so far. Rani Mukerji and Kajol’s names do not feature on the list of winners. Among her contemporaries, only Tabu (two), and Vidya Balan and Priyanka Chopra (one each) have been bestowed with the honour. Shabana Azmi, a popular leading actress from the 1970s and 1980s, has the most number of Best Actress awards (five).

Ranaut’s journey in Bollywood is an inspiring tale of survival and the embodiment of self belief and hunger to succeed. In an industry which is known to offer the red carpet to star sons/daughters and the Miss Indias and Miss Worlds, she has defied all odds to carve a niche for herself by putting her talent on show. Her rise to the top of the league saw her attract big money and popularity. In the 2014 Forbes India Celebrity 100 List, she was ranked 64th with earnings of Rs 11.98 crore and a fame rank of 67. As per the 2015 Forbes India Celebrity 100 List, her earnings shot up to Rs 18.63 crore. She moved up 24 places to rank 43 and her fame quotient too shot up to 57.

Without a famous last name and the assurance of a stable career, a teenaged Ranaut left her small town in Himachal Pradesh and came to Mumbai to become an actor at the turn of the millennium. She would later reveal that she was an unwanted girl child for her family. The struggle and the tragedy of being an outcaste only worsened.

During her early days in Mumbai, she says she was physically abused by a man who was her father’s age. And though she showed immense promise with her performances in some of her early movies – Gangster, Woh Lamhe, Life in a Metro and Fashion (for which she won the National Award for Best Supporting Actress) – she wasn’t accorded the respect that she deserved. Ranaut, after all, was the ‘outsider’ in an industry which only mollycoddles its own. She was ridiculed for her accent, mocked for her English, derided for her fashion sense and vilified for being distinctively different than some of the foreign-educated Bollywood stars. Her neurotic characters on screen were seen as an extension of her personality. The industry wasn’t ready to welcome a rebel with a devil-may-care attitude, especially a woman who wanted to break stereotypes.

Ranaut, however, learnt to be friends with thorns. She worked on her shortcomings and overcame all obstacles. Today, she is called to speak at international events and complimented for her articulateness. She’s now considered a global fashion icon with top brands queuing up to sign her as their ambassador. Her stature as an actress has only grown with some memorable performances over the years, the most noticeable being Queen (2014) which fetched her a National Award for Best Actress last year. She was suddenly hailed as a game changer. Ranaut was applauded for choosing complex roles and then essaying them with conviction. Her success, even without having worked with any of the reigning Khans, was beginning to talk. The endorsements followed, but here too, she stuck to her ideals. For instance, she refused a lucrative offer to be the face of a fairness cream. And she has categorically stated that she won’t do item numbers either.

The success of Tanu Weds Manu Returns the following year – it made a whopping Rs 150 crore-plus business at the box office – meant that the industry could no longer turn a blind eye to her. She began to draw audiences to the theatres purely on the basis of her reputation of being a solid actor. She continued to raise the bar and opted for a path that many other actresses feared to tread.

And yet, there is something about Ranaut that has made many in her fraternity uncomfortable – her forthrightness, her claim of being the highest paid actress, her desire to live life on her own terms and her rebellious streak. Her open criticism of popular award shows and her unwillingness to be present at such events meant that her outstanding performance in Tanu Weds Manu Returns was overlooked at most award ceremonies. (The National Award will hopefully force the organisers to introspect.) And her willingness to take on a superstar recently saw him label her as someone with Asperger’s syndrome. The legal fight between the two may even result in her being further alienated by a section of the industry. Ranaut though doesn’t seem perturbed, at least for now. And the National Award could not have come at a better time for her.

It’s not that Ranaut hasn’t made mistakes. She has – in her relationships and her choice of films. But what’s commendable is that she has emerged stronger from her bad experiences. And that’s what has helped her survive in a competitive industry without a godfather. Ranaut is more than just a powerhouse of talent. She’s a self-made woman with a no-nonsense attitude. These qualities have taken her to the top in her profession and she doesn’t seem keen to give up that place anytime soon.

11,935
Thank you for your comment, we value your opinion and the time you took to write to us!