A call to action on Water!

Last week several news items reported the flooding of Bangalore lakes. Depending on who you talk to, the blame is placed on excessive rains, BBMP, BDA, or BWSSB. However, the flooding of the lakes is a symptom not the disease. The disease is an overall lack of understanding and hence the abuse of the water cycle.

On a visit to Kochi last year, I reacquainted myself with how much our lives are entwined with water.  With modern cities, piped water, imported seafood, asphalted roads, it is easy to forget that water is more than for just drinking – water is life! 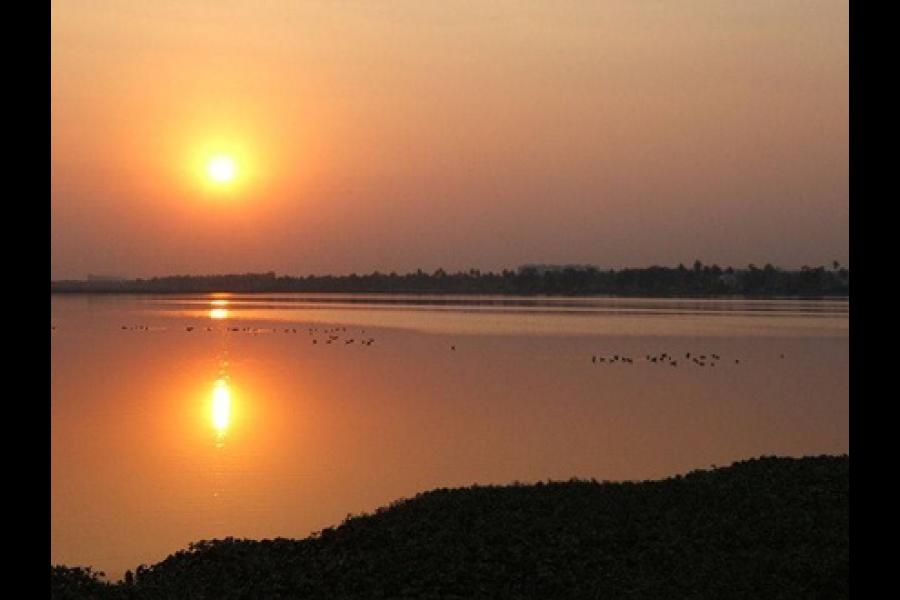 I live close to the Varthur Lake near Whitefield, Bangalore. Sunset over the Varthur lake looks beautiful.

However, the beautiful picture hides problems aplenty. Here is a picture I took of the lake: More than 50% of the lake is most often covered with hyacinth. The excessive growth of hyacinth indicates excess nitrogen in the water, which in turn indicates presence of sewage in the lake. Surprisingly, only 50% of the sewage coming to the sewer treatment plants at Koramangala and Challaghatta are treated.

The rest of the untreated sewage is released into Bellandur Lake which connects to the Varthur Lake (see satellite view courtesy Google Maps):

Negative consequences of excessive hyacinth include loss of bio-diversity, increased mosquito breeding, loss of fishing livelihood, and adverse impact on agriculture. In addition, the water in these lakes has poor quality from any measure including dissolved oxygen and biological oxygen demand. Continued neglect leads to the death of the lake as is apparent in areas adjacent to the Varthur Lake which were once part of the lake system and now are land masses: These areas have now become part of agricultural lands, and will eventually give way to new housing developments, concretization, and further carnage of the environment. In addition to the sewer contamination, there is obvious direct industrial discharge into the lake as is apparent from the voluminous froth generated at the outlet points of the lakes. Contamination of the lakes is just an example of general contamination of water bodies due to human activities. In general, surface water contamination is microbiological and suspended impurities which are relatively easy to address. The more difficult problem is that of ground water contaminated with dissolved salts, Arsenic, Fluoride, and Nitrates. It is estimated that 6000 people, mostly children are known to die every day due to the consumption of unsafe drinking water

Beyond contamination, the fundamental issue is water scarcity. It is estimated that by 2025, 5.3 billion people (two thirds of the world’s population) will suffer from water shortages . In India, by 2020, the demand for water will exceed all known sources. We need to remind ourselves that only 2.5% of all the water on the Earth is fresh water. And even if we were able to tap into and convert more saltwater, we still impact the water cycle in ways beyond our current understanding.

As corporations and as communities we can make a significant impact. I would like to share here some examples from the GE John F. Welch Technology Center (GE-JFWTC) where I work. The 50-acre campus showcases a variety of technologies that help manage water consumption, usage and waste. An on-site plant with advanced sanitary wastewater treatment capability for domestic and industrial effluent (also known as tertiary treatment) features a Submerged Aerobic Fixed Film (SAFF) process, installed in 2006, and GE Ultra Filtration (UF) advanced technology, introduced in 2011. An average of 70,000 gallons of freshwater use is saved per day due to these treatments. A GE Reverse Osmosis (RO) system installed in 2009 to remove total dissolved solids, and soften treated wastewater and freshwater, helps avoid 2.85 million gallons of freshwater use per year. An additional 660,000 gallons of rainwater per year is harvested through a rooftop system. Finally, excess water that would otherwise be lost to runoff during rains is rerouted on the ground to underground recharge systems that replenish the water table. Additional destinations for treated or collected water include the site’s cooling facilities, its toilet flushing systems and its 17 acres of gardens.

With the use of appropriate technologies, per capita water usage levels at our center have dropped by 35% since 2006. A cross-campus water audit in 2013 is also planned as part of additional efforts to reduce usage. These site-level efforts help drastically reduce both the level of tanker-transported freshwater incoming to the facility, and the burden placed on current water supplies by a growing urban population of 8.4 million people in Bangalore.

At GE-JFWTC, we have used our cricket ground as a water harvesting site with subsurface channels routing the rain water to a ground water recharging pond: All water run-offs from concrete areas also make their way to another pond (holds about 600KL water) which recharges the ground water and also acts a reservoir for landscaping needs: I am sure that we still have a lot to learn from other corporations and I look forward to those inputs. This is a call to action for all corporations to understand their impact on the water cycle and manage it most efficiently. This is a call for actions from all communities to understand the system of lakes built by our ancestors and recreate living breathing lakes. This also a call to action from the government to provide adequate sewer treatment facilities, take strict action on those who encroach on lakes and the run-off channels (Raja Kaluve) and those who enable this encroachment through corrupt practices.

7,968
Thank you for your comment, we value your opinion and the time you took to write to us!

Tweets by @forbesindia
Prev
SoMoClo: Awakening to a new Buzzword!
Next
Life in the Time of Genetic Decoding - Part 1