Life in the Time of Genetic Decoding - Part 1

As genome sequencing cost plummets, we'll soon be bar coded. What are we going to do with all the sequencing data? Have better control over our health or grapple with suspicion or privacy?

Genes rarely hold the secrets to who we are, nor are they the final arbiter of some of the late onset chronic diseases the world is grappling with. But our genomes are something we can’t really negotiate with.

Late last month the US patent office granted a patent to 23andMe, a California direct-to-consumer genetic testing company, that would allow it to offer parents opting for in vitro fertilization to negotiate the genome of their child. That is, parents can choose to have a child with desired traits. The claim of the patent – Family Traits Inheritor Calculator -- led to a few public debates about the ethics of ‘designer babies’. Keeping aside the ‘patentese’, the proprietary technology of this Internet start-up implies that prospective parents can select the donors of eggs and/or sperm to increase the likelihood of having a child with desired phenotype (i.e. physical features like light eyes, curly hair or fair/dusky complexion) and genotype (genetic makeup like long expected life span; reduced or no risk of certain disorders).

It is a controversial patent. The debate swings from one extreme to the other – From how ethical or morally correct it is for parents to play God to the defensive argument that this patent is merely a ‘deterrent’, preventing others from developing this technology, at least for a while.

But the horse has left the barn. And riders are trying to saddle it, with different services.

Around the same time last month that 23andMe was granted the patent (and soon announced that it wants to genotype at least 1 million people), I had my own moment of genomic reckoning. As I said earlier, a few months ago I volunteered as a ‘healthy subject’ to have my Exome sequenced. Exome constitutes nearly 1 percent of the entire human genome. If the latter contains 6 billion letters of DNA (or 3 billion base pairs of nucleotides) then the Exome is about 60 million letters, comprising 20,000 odd genes that code for various proteins.

Hardly any commercial health care organization is doing exome sequencing in India; it’s still restricted to researchers looking for genetic disorders. The Next-generation sequencing (NGS) that it entails, is just about taking off even in the developed countries and is still in infancy when it comes to clinical diagnostics. But the novelty of the technology was not quite the draw. I don’t have any chronic disease, yet. And my family doesn’t have any history of genetic disorders. I’m also not the type to lead a quantified life and tailor my life style to what my genes seem to predict. I think it was my conversation with Leroy Hood a few years ago in Hyderabad had sowed the seeds of participatory medicine. Hood, who automated DNA sequencing, and has been instrumental in setting up more than 15 biotech start-ups, including the giants like Amgen and Applied Biosystems, has added a new descriptor to personalized medicine – participatory. I decided to become a participant.

I had two other compelling reasons. As a journalist, it’s only when you get down to writing about a topic, that you put all energies in understanding it. As they say, writing is a concentrated form of thinking. Moreover, direct-to-consumer genetic testing has arrived in India. I wanted to explore what they have to offer and what should the consumers expect from these tests. (More on that later) 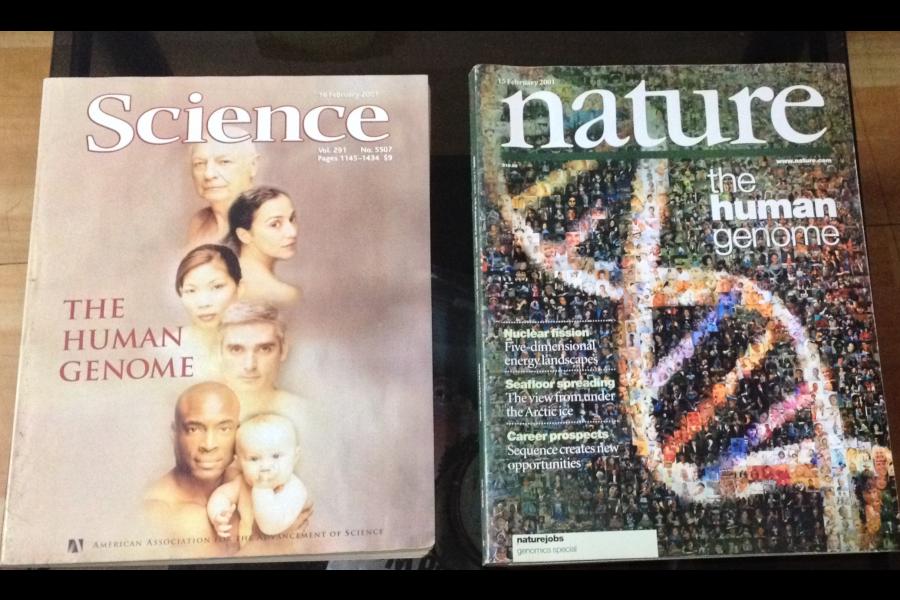 From the time the rough draft of the human genome was published in 2001 Nature (a for-profit journal publishing non-profit work of the International Human Genome Sequencing Consortium) and Science (a non-profit journal publishing for-profit company Celera’s sequencing work), we have come a long way. Pretty much in our lifetime, most of us could carry a copy of our DNA sequences in our pockets!

The second reason is more to do with science. I had the opportunity to see American scientists sequence, discuss -- virtually live -- genomes in 2000-2001. It was the time when genetics was publicly turning into genomics, a digital discipline. I was at the AAAS meeting in San Francisco in February 2001 when the two public figures of genomics – Francis Collins, leader of the Human Genome Project and Craig Venter, President of Celera Genomics, the private company which was then sequencing the human genome—with the respective rough drafts of the human genome published in Nature and Science, spun stories of health advances and public benefits. (I still have those editions of the journal, pix attached.) Some of those stories were oversold, prematurely. A decade later, in July 2012, at the European Science Forum in Dublin, as I sat through various talks and lectures of Craig Venter who spoke about some of the work he’s doing at Synthetic Genomics, it occurred to me that DNA sequencing will soon become affordable and pervasive like smartphones, though not all of the data being generated will be fully understood any time soon.

So earlier this year when I was writing a story on Strand Life Sciences, which has begun offering Exome sequencing, not directly to consumers but to patients and through their clinicians, I offered to be a healthy subject for their research programme.

I decided to go through the drill. And it started with a genetic counseling session with Dr Kavita S Reddy, a clinical geneticist at Strand and a former Kaiser Permanente veteran who’s relocated to India after 30 years in the US. (She is just getting down to training some genetic counselors in the country through an online programme.) Apart from helping me decide if I wanted the test, the consent form highlighted “important information like the risks and benefits of the test, your rights as a patient, how the results from this test may or may not impact your medical care, how the results might be used in research, and how you may choose to participate.”

Dr Reddy said, “This is pre-test genetic counseling. Go back, think and then sign the form.”

It was fairly simple. I read the privacy protection part and checked all the boxes, except one which said: “There are specific genes or diseases for which I DO NOT want to receive information (indicate them below or attached additional sheet).”

There was none. I wanted to know everything my DNA had to tell; whether it was related to any primary condition (in case of a known disease) or a secondary condition (adult onset of some diseases, treatable or untreatable).

I think I was pretty brave in un-checking that box. When Nobel laureate James Watson -- who forms the famed Personal Genomics Trinity along with Craig Venter and George Church – got his genome sequenced, he didn't want to know which version of APOE gene he had. Certain variants of this gene are known to confer high risk for Alzheimer’s or heart disease. Venter on the other hand is known to carry one high risk variant.

Perhaps what gave me confidence was my relative lack of knowledge of the complex and evolving science of genomics. The fact that the results would be reported through the healthcare professional, they’d be confidential and “will only be released to other medical professionals or other parties” with my written consent, was reassuring.  “All laboratory raw data are confidential and will not be released unless a valid court order is received.”

A few hospitals and direct-to-consumer genetic testing start-ups have been offering genetic tests even though the predictive power of most current genetics using common markers is very low. Some test whether a child has ACTN3 or sports gene that would make him or her super athlete; others give a disease predisposition report card, suggesting how high or low your risks of getting some diseases are and what lifestyle modifications are necessary. (More on that in the next blog post.)

There’s a consent form to be signed in these tests too. Uncheck the box if you don’t want your sample to be used for research. But remember that the promise of genomics rests in large numbers, really large numbers. It’s only by studying and analyzing data from hundreds and thousands of people can researchers detect meaningful genetic variants that affect complex conditions like diabetes and heart diseases.

“For research, very little genetic data exists, whether it is benign or pathogenic,” said Dr Reddy. And interpretation is not easy, nor a perfect one either.

I was cautiously briefed. People analyzing my data would look for “actionable” (genetic variations that can be acted upon) and “preventative” mutations.

It sounded like fun until late September when Strand CTO Ramesh Hariharan sent a mail: “We have gone through the first round of analysis on your genome. We can walk you through some of the findings if you can come by.”

Some of the initial courage I exhibited started melting. I wanted to know, but then I didn't want to know. And there’s indeed such a thing as having too much information.

Do I have cancer mutations? (There’s now a map of genetic faults that lead to some cancers) What is my risk for Alzhemier’s, Parkinson’s, Age-related Macular Degeneration, (Eye has been my weak spot) – the list started swimming before my eyes.

Next: In Part II, what do my genome sequences tell me and what that tells us about genetic testing in general.

16,942
Thank you for your comment, we value your opinion and the time you took to write to us!

Tweets by @forbesindia
Prev
A call to action on Water!
Next
Life in the Time of Genetic Decoding - Part 2