In October last year, Sachin Nagori became the poster boy of Aurangabad. The local businessman had pulled off an incredible world record — the highest sale of luxury cars in a single day, 151 Mercedes Benz cars, to be precise. For a brief while, even the international media lapped up the story. Aurangabad, about 372 km from Mumbai, was suddenly the centre of attention. 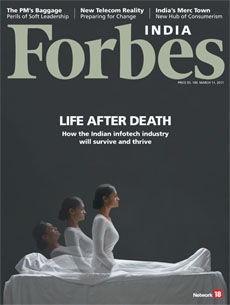 Just when it seemed the excitement had died down, there was another such report the following month about 101 BMWs being sold there. That’s when we decided to investigate the phenomenon. Our team of Principal Correspondent Ashish K. Mishra and Deputy Head of Photography Vikas Khot discovered why marketers are making a beeline there — and also, the local cultural nuances they’ve encountered. It’s in places like Aurangabad that the future of India’s consumption story lies. And those marketers who transpose what they’ve learnt in Mumbai in these small towns could end up paying a heavy price. Intrigued? Read our fascinating story on The Value Hunters of Aurangabad on Page 64.

By the time you read this, the finance minister would have presented the Union Budget 2011. In the normal course, it would have been a walk in the park for the craft y politician, except that this year, the Central government has its back to the wall. The twin evils of corruption and runaway inflation have burned a huge hole in the government’s credibility. As the months have progressed, the perception of a governance deficit has grown stronger. The pressure on Prime Minister Manmohan Singh became so acute that he was forced to call a press conference a few days ago to publicly defend his position. Make sure you read Udit Misra and Dinesh Narayanan’s analysis of why the PM is caught in a bind on page 54.

Over the next few weeks, you can expect a huge public relations effort by the government to win the confidence of the people, especially the vocal upper middle class in the metros, who’re fed up with the stories of either scams or the complete paralysis of governance. That’s why this year’s Union Budget speech will be keenly awaited. I’m hoping that the FM does the right things — consolidate the government’s finances and prudently apportion money for the social sector — rather than indulge in mere populism.

Tweets by @forbes_india
Why Good Ideas Die … And A Simple Approach To Saving Them
Ravi Venkatesan: Wish We had Responded to Innovation Sooner