When the Stock Markets Tank, Stay On Course

Be patient when stock prices fall. You don't lose money when prices fall only when you sell at those prices 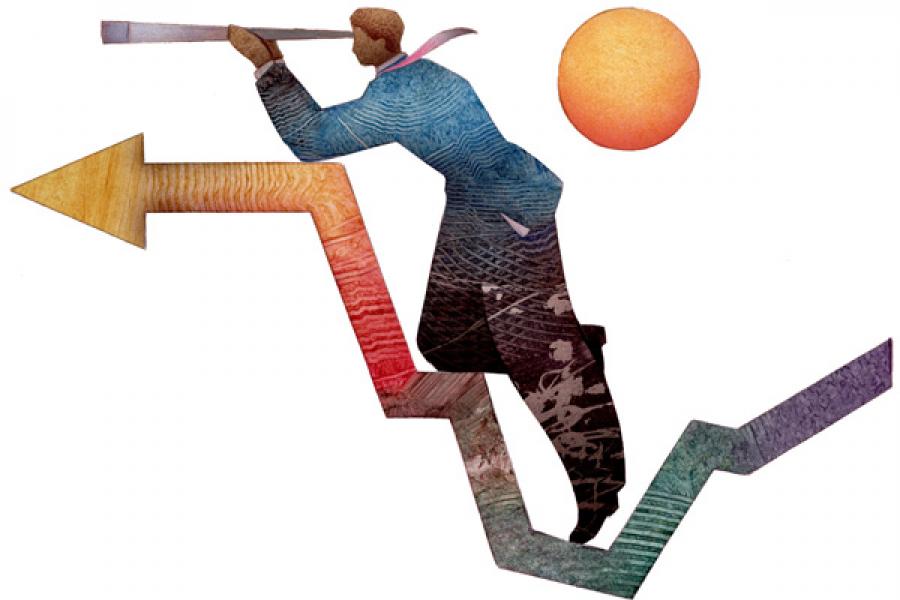 If you are unfortunate enough to meet an investment maven at a cocktail party and seek his expertise on winning investment strategy, you will most likely receive wisdom on asset allocation, smarter stock selection techniques and market direction. Much like Bollywood, our investment role models resemble Shahrukh Khan with a perpetual bias for action! More often than not, it’s exactly the opposite that is true. Patience and discipline are definitely the two most under-rated attributes in the investment lexicon. Since none of us has hit upon the Holy Grail in investing as yet, there will certainly be periods when our portfolios perform far worse than the market and individual stocks get trampled by the vagaries of the business cycle.

The desire to be active at such times can convert mild discomfort into permanent disability, if not searing pain! Being patient can turn such disadvantages into “smart thinking”. The common perception of risk is the possibility of a near term market decline. For the investor with a time horizon of three years or longer, this definition is invalid—true risk is measured in the context of the long-term appreciation potential of a business or portfolio of stocks. Investors do not get poorer because the price quotation on a stock heads south! They lose money only when they sell at that price. Trite as it may sound, the difference in investment objectives and ownership of high-quality companies rather than price action separates the “long-term greedy” from the amateurs.

Benjamin Graham argues the case for patience strongly in The Intelligent Investor:
“For indeed, the investor’s chief problem—and even his worst enemy—is likely to be himself…We have seen much more money made and kept by ‘ordinary people’ who were temperamentally well suited for the investment process than by those who lacked this quality, even though they had an extensive knowledge of finance, accounting and stock market lore.”

When it comes to patience, the media is the prime culprit in leading investors astray. Given the compulsions of increasing viewership, the emphasis on being sensational is easily understandable. The desire to fan sentiments such as panic and euphoria accompanied by a constant fix of investment recommendations and predictions are enough to undermine the mindset of even the most balanced individuals. The lure of websites with proven formulas to get rich quick and the ability to constantly check the value of your portfolio based on live prices only lead to over-confidence, excessive trading and higher costs. What is even better is that the “talking heads” on television are never held accountable and most often have a hidden agenda at variance with long-term wealth creation. The notions that knowledge is power, convenience is essential and rapid trading is investing rather than speculating are complete humbug. Yet, this is easily forgotten in the heat of the moment!

The financial media believes it adds value by creating an illusion that markets are predictable. Once you succumb to the belief that prices correspond to patterns, it is incredibly difficult to rein in the latent speculative instinct that torments virtually all investors and remain patient. Hindsight bias is the cornerstone of the financial media. Every single day, within minutes after the market closes for trading, experts have elegant explanations for why the Nifty was up 50 points or large caps performed better than mid-caps! Quite incredibly, events that the smartest analysts were unsure about are seen to be obvious immediately after they occur. The simple truth is that people can very rarely reconstruct, post facto, what they thought about the probability of an event before it occurred. Truly outstanding value investors stand apart by virtue of their ability to defy group-think and in coming to terms with uncertainty.

The current investment landscape does not seem to provide cause for cheer. The stultifying domestic political paralysis caused by serial revelations of corruption and a complete lack of willingness to think sensibly about the future do not bode well for sustaining India’s new-found economic prosperity. A complete failure to address subsidies boldly and a monstrous fiscal deficit that refuses to go away have led to laughable remedies such as the retrospective implementation of General Anti-Avoidance Rules. Despite an uneasy calm, Europe remains in the sick bay as evinced by Spanish bond yields, nationwide Italian strikes and the outlook for the European banking behemoths. The data from the US and the attitude of the Fed towards extended monetary easing suggest a gradual economic recovery and revival in consumer confidence.

Despite a rumble of political dissent and visibly slower economic growth, China is pulling rabbits out of the hat which have the approbation of international investors. The Middle East is more of a Pandora’s box than ever before even though the first signs of popular democracy taking root can only be construed as positive. The clerics in Iran certainly deserve top dollar for a tight-rope walk that even has Barack Obama seemingly enthralled! As Nicolas Sarkozy, Barack Obama and Angela Merkel grapple with the challenge of seeking re-election, the path financial markets seem to be taking is truly random Brownian motion.

This is clearly a time to hang tough and stick to the basics. As despondency builds that international investors are about to abandon India, remember that buying a business with a solid franchise run by competent managers with high integrity at a cheaper price than before makes them that much more likely to deliver stellar investment returns in the next five years. Seek stable operating margins, unspectacular but consistent revenue growth, steady increase in cash flows, a sturdy balance sheet and above average dividend yields to take full advantage of the hype created by the prophets of doom. Keep a careful watch on companies such as Punjab National Bank (928), Petronet LNG (172), Munjal Showa (71), Ador Fontech (89) and M&M (700) since they are robust franchises available at sensible valuations.

As the master investor, Lord Keynes, put it succinctly: “The difficulty lies, not in the new ideas, but in escaping from the old ones, which ramify, for those who have been brought up, as most of us have been, into every corner of our minds.”