A shortage mentality, probably a relic from our licence-permit raj days, continues to pervade both officialdom and business. A case in point is banking. India is an underbanked country, and we could certainly do with more banks. So when the Reserve Bank of India opened a window for new bank licences, we had 26 applicants. There could have been more, if the central bank had not put in all kinds of exclusionary clauses in its entry rulebook. 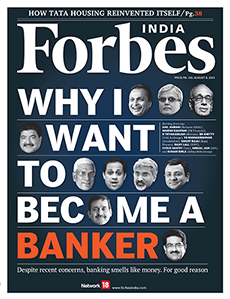 This is unfortunate. By making it more-or-less clear that it will not be liberal in the grant of licences, the RBI has ensured that there will not be too much competition in the business even after more licences are handed out. This will ensure fat margins for incumbent players, and possibly for some of the new entrants. On the other hand, the same psychology has encouraged companies with little chance of landing a licence to throw their hats in the ring, in the hope that the luck of the draw will favour them.

In our cover story on banking, we have looked at three different angles. First, Debashis Basu tells us how the business of banking is really sticky, and that the sector clearly needs more competition. Second, Forbes India writers reached out to all the wannabe bankers—both the big business houses and the myriad NBFCs—to figure out why they want to become bankers, and how they hope to make a success of their efforts if they get a licence. Third, we talked to Paresh Sukhtankar, executive director of HDFC Bank, to ask how the bank has managed to relentlessly outperform the rest of the industry for close to a decade or more. No bank in the world probably has been as consistent a performer as HDFC Bank, and even in the relatively more efficient group of new-generation private sector banks, HDFC Bank is a clear outlier.

In other stories, Samar Srivastava discovered a silent performer in real estate—a sector now in the throes of major debt restructuring and weak performance. Tata Housing has been one of the few exceptions. Under Brotin Banerjee, it has been growing the topline 100 percent every year for the last few years. With no money, Tata Housing avoided the debt trap that the others ran into in their mad rush to build land banks. Now, it’s sitting pretty.

Tweets by @forbes_india
Raingear Rates
Podcast: Why Banking is An Attractive Sector