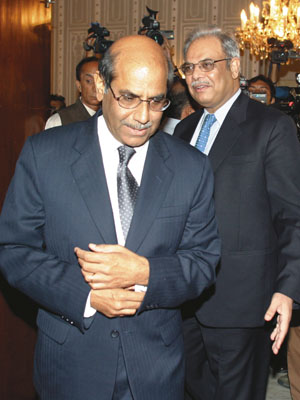 
Q: Why did India change its official stand on climate change in 2009?
Saran: India’s basic approach to climate change has not undergone any change, though there have been nuanced shifts on specific issues in response to the dynamics of the negotiating process. The key elements of our negotiating brief may be summed up as follows: The multilateral negotiations must adhere strictly to the mandate adopted by consensus at the 2007 Bali Conference of Parties to the United Nations Framework Convention on Climate Change. The Bali Road Map envisaged a multilateral negotiating process on two parallel tracks. One is to aim for an agreed outcome, which would enhance the implementation of the principles and provisions of the convention. Two, under the convention’s Kyoto protocol, developed country parties to the protocol, would negotiate targets for the reduction in their greenhouse gas emissions in the second commitment period commencing in 2013. The United States, as a non-party to the Protocol, would take on “comparable commitments”. Developing countries are not expected to take on emission reduction obligations in the second commitment period. Since this road map represents consensus among all the parties to the United Nations Framework Convention on Climate Change (UNFCCC), India and other developing countries insist that the Bali mandate be respected. It is due to the concerted efforts of like-minded countries — including India — that the recent Copenhagen Conference decided, again by consensus, to continue multilateral negotiations on the two parallel tracks with the mandate unchanged.

The Copenhagen accord does not represent an agreed outcome. It is a political document, but its contents could become valuable inputs into the post-Copenhagen multilateral negotiating process…as far as India is concerned, the only legitimate forum for climate change negotiations is the UNFCCC. There cannot be a parallel non-UN process among the 25 odd countries that together drafted the Copenhagen accord. India has voluntarily conveyed its intention to reduce its emission intensity by 20-25 percent by 2020 with 2005 as a base year. This is a political gesture and not an internationally binding legal obligation to reduce emissions applicable to developed countries. Therefore, it does not represent a departure from India’s basic position. It should be appreciated that India is committed to doing whatever it can, within the limitation of its own resources, to promote the ecological sustainability of its developmental process. However, this does not imply that our domestic plans or targets should be transformed into internationally binding commitments.

Q: Do you think the recent controversies surrounding Intergovernmental Panel on Climate Change (IPCC) and climate change, question the credibility of IPCC?
Saran: I do not think that there is any ground to question the credibility of the IPCC. The IPCC process consists of two components. One, there is a compilation of a very large number of papers from very eminent scientists from all over the world, on areas of their expertise. These are available for public study and reference and it is only natural that there may be differing assessments and analysis. There could be the odd mistake or imprecision in some of the papers but that is hardly ground to reject the entire body of the Assessment Report. The second component is what is more directly relevant to States party to the UNFCCC. This is a Summary of Conclusions and Recommendations for the guidance of policy makers, based on the first component, but carefully vetted by governments themselves. The content of this report has not been called into question. The bottom line is that there is international consensus that global warming is taking place as a result of anthropogenic factors and that there is an increasing likelihood of this leading to irreversible and, perhaps, potentially catastrophic climate change. Uncertainty, there will continue to be, but precisely for this reason, we need to be prudent and adopt a precautionary approach.

Q: What to your mind is China’s position on tackling climate change in relation to ours? What are the key areas where both the countries have room to work together?
Saran: China’s strategy for tackling climate change is similar to India’s — improving the efficiency of its energy use, pursuing a graduated shift from its current reliance on fossil fuels, which generate greenhouse gases, to progressively larger use of renewable  sources of energy, such as wind and solar, and clean energy such as nuclear power. Since our strategies are similar there is immense scope for mutually rewarding collaboration, particularly on technology. However, we have seen little progress in this regard though we have worked very closely and effectively together in the negotiating fora.

Q: What was the toughest part about your job?
Saran: Climate change is a challenge which demands a cross-cutting and a multi-disciplinary response. Several ministries and agencies, state governments as well as civil society have to evolve a common understanding and work closely together. It is also necessary to engage regularly with business and industry. After all, their interests will be directly affected but there will also be new opportunities for them in the renewable energy sector. Unfortunately, both in the government as well as in the corporate sector, we tend to work in compartments or silos. Overcoming this was a major challenge, whether in the formulation and implementation of the National Action Plan on Climate change or in formulating India’s negotiating strategy for Copenhagen. Being in the Prime Minister’s office and having the Prime Minister’s support enabled us to overcome, in some measure, this challenge.

Q: Do you see a pattern in the way the West has blamed India for the failure of climate change talks — similar to the way it did with the failure of the Doha round in the world trade talks?
Saran: We should expect that India would be targeted for taking positions which are not convenient to the Western countries. This is quite natural in a negotiating environment. If our negotiators get pressured because of the fear of getting a negative image, then this can weaken our negotiating position. We must first determine what is in India’s interest substantively, whether this is in the realm of trade or climate change and then package it and articulate it as positively as we can. But at the end of the day, we should not make image more important than substance.

Q: What’s next?
Saran: I will remain engaged with the issues in which I have interest and they include foreign policy, energy and climate change. But I also hope to indulge other more personal interests such as trekking in the mountains.

Tweets by @forbes_india
The Day of the Forex Expert
Mughal-E-Azam: The Real Romance