A story of enduring love: A director who laboured over his magnum opus for years, actors whose chemistry sizzled on and off screen, and fans who keep coming back even after five decades 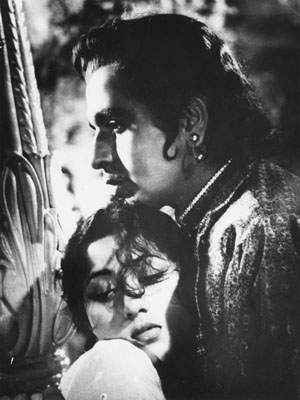 Film goers at Mumbai’s Maratha Mandir on August 5, 1960, came out quite confused. It wasn’t clear why various characters in the newly released movie kept calling out for pillows at the end of profound conversations in medieval Urdu. Only later did they realise that it was not “takiya” but “takhliya” that the king and the prince in Mughal-e-Azam were in the habit of bellowing to order the servants to leave the scene.

The misgivings reached the ears of Karimuddin Asif, the film’s director who had spent 16 years planning and executing the grandest movie of his career. His associates feared the audience may not relate to the movie. It had been a jinxed project from the beginning and the last thing they wanted was for the audience to ask which language it was in.
Asif was undeterred. On so many occasions, the movie had looked like a lost cause and he had come under pressure to drop it. Many had advised him that his effort to make the most expensive movie in India was foolhardy. Now the movie was released at last and there was no place for doubts. Asif told his assistants to chill and went back to his celebration of the release.
He was right. The audience fell hook, line and sinker for Madhubala’s mesmeric screen presence, Prithviraj Kapoor’s royal sketch of Akbar, Naushad’s soulful music, Shakeel Badayuni’s unforgettable lyrics and the grand imagery that Asif had produced with the sets and costumes. For three years, people kept coming back to the theatres to watch it just once more. Mughal-e-Azam went down in history as one of the greatest Hindi movies ever and it took a decade and a half for Sholay to come and break its box office record.
“Asif was a perfectionist. He wanted to get everything just right. The level of detailing was incredible,” says Deepa Gahlot, film critic and author. A few examples: The Krishna idol in one scene was of real gold, the jewelry that Rani Jodhabhai wore was designed in authentic Rajasthani style of that era, soldiers from the Indian army were used in war scenes.
But the movie’s mystique comes from the way it reflected real life. To be precise, the unfulfilled love between Dilip Kumar, who played Salim, and Madhubala, who played Anarkali.
An 18-year-old Madhubala had taken a fancy to Dilip Kumar on the sets of Tarana. But it was on the sets of Mughal-e-Azam that love really caught on. Soon, the two decided to get married.
Again, just like the movie, it was a father who separated the young lovers. Ataullah Khan, Madhubala’s father, didn’t approve of their union. When B.R. Chopra planned Naya Daur (1957) with the two in lead and planned an outdoor shooting session in Bhopal, Khan asked his daughter not to go. He feared such proximity between her and Dilip Kumar away from his eyes could lead to a marriage.
The father’s plan to separate the two succeeded but it also ruined Madhubala. Chopra sued her for not showing up for the shooting and to her shock, Dilip Kumar testified against her in court. She lost the case. Their love ended bitterly.
The rest of the shooting of Mughal-e-Azam was done in an uneasy atmosphere. But both Dilip Kumar and Madhubala were professionals who put aside their differences and helped Asif complete the shooting.
When Madhubala died in 1969, aged 36, due to a heart disease, Dilip Kumar was not in Mumbai. When he heard the news he cried like a baby, not wanting to hide his love for the

Tweets by @forbesindia
Shyam Saran: Expect India to be Targeted
The Hindu: Board Room Becomes Battlefield