The doctor need not see you now

Technology can not only reduce the load on doctors, but also make medical treatments and monitoring more affordable and accessible 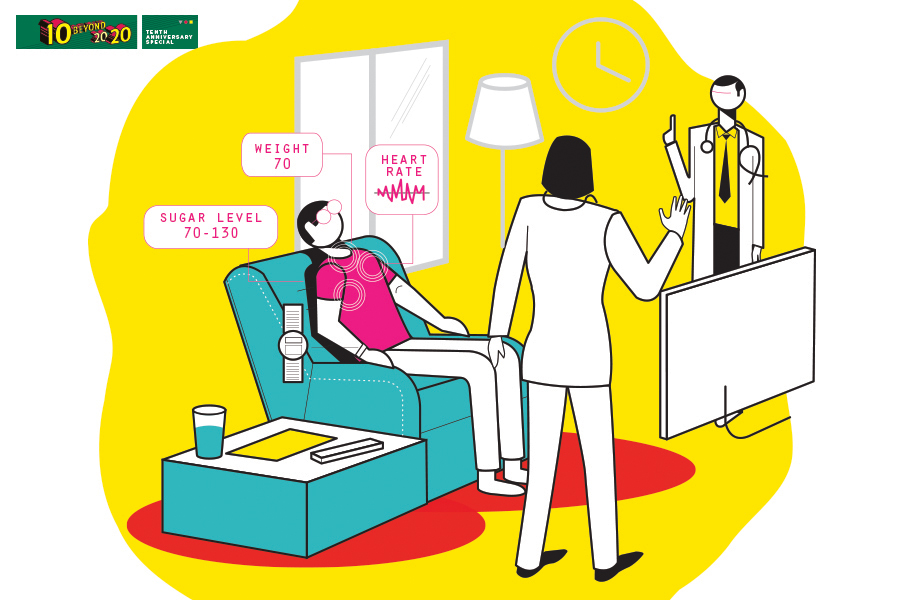 
You would think there is nothing complicated about weighing a newborn. And yet, in rural India it is quite the opposite. We’re sitting in the office of research institute Wadhwani AI, a not-for-profit AI institute for social good in Andheri, Mumbai, where Rahul Panicker, chief innovation officer, shows photographs of a rural social health worker holding a spring balance that delicately suspends a newborn in a little hammock, as the baby’s family looks on. Another photograph shows a register with data, with most figures putting the weight of babies at 2.5 kg, a figure below which they would be classified as low weight. “Either they [the health workers] don’t have the time or they are overworked, it could be a number of issues,” says Panicker.

Low birth weight accounts for 48 percent of deaths among newborns in India; deaths that can be avoided by timely intervention. And yet, lack of spring balances and cultural hurdles that prevent people from outside the family to touch a baby in its first 30 days, means low birth infants often fall through the net.

The Wadhwani team has come up with a virtual weighing machine, which uses artificial intelligence (AI) to produce a virtual 3D reconstruction of a baby. “Most health care workers have been given smartphones by public health programmes. So they can take a short video of the baby, from which we can do a 3D reconstruction of it. From that, we can estimate its weight, height and head circumference, which are difficult to measure on the field,” says Panicker. The technology, which has made it to the last wildcard round of the $5 million IBM Watson AI XPRIZE in the US, will begin field experiments later this year.

AI has been paving the way for contact-less screening and diagnosis. For instance, with Niramai’s Thermalytix technology, a person can walk into a booth and get scanned in 15 minutes, in complete privacy. “Nobody would have touched her or seen her, there’s no radiation and absolutely no pain,” says Geetha Manjunath, co-founder, CEO and CTO of Bengaluru-based Niramai, adding that AI-enabled thermal scanning can help detect abnormalities at an early stage.

From diagnostics to preventive care with constant monitoring, AI solutions are making health care more accessible and affordable, and slowly moving the needle from sickness care towards wellness care. While most of the successes have been with image-based applications—like diagnosing pneumonia or tuberculosis from chest X-rays—another set of work has been predictive in nature, and even goes beyond the abilities of clinical science. For example, physicians recently demonstrated how the onset of Alzheimer’s disease can be predicted from PET scans six years earlier than clinical diagnosis, thus enabling early intervention, according to a study published in the journal Radiology this February, says Panicker.

“Patient care right now is entirely episodic and reactionary. Everything we do in hospitals and clinics is based on symptoms, which, in most cases, is much delayed in terms of when the episodes could have been caught,” says Rahul Shingrani, co-founder and CEO of ten3T, whose wearable device monitors vitals and helps in early detection and prevention of medical episodes in hospitals, on the road, and at home.

Other wearable devices and apps that enable people to keep a long-term track of their own health are another aspect of preventive care that can help in timely intervention, whether it be heart rate or sugar levels.

When a person with a chronic disease consults a doctor every six months, apps make it possible to continuously monitor and alert patients towards real-time changes in medication and behaviour in the time between doctor visits, says Abhishek Shah, co-founder and CEO of Wellthy Therapeutics, a digital therapeutics company that aims to reverse and control chronic illnesses and currently works in three areas: Diabetes, nephrology and cardiology.

A leap of imagination
A future with constant surveillance of the body could mean health care at your doorstep, with minimal hospital visits, and hospitals becoming a cleaner, simpler and automated version of themselves. Manish Singhal, founding partner at Bengaluru-based pi Ventures, which invests in AI-and Internet of Things (IoT)-based startups, says, “Basically, every human will have a CCTV camera sitting on their head, adding that monitoring would mean that “at the time of need, there could be a health care intervention. I do believe that will happen in 10 years for sure.” Health care, he says, could literally be delivered through the mobil phone or other gadgets in a personalised way.

Devices will get smaller, and more integrated with the body. “Building more minimally intrusive devices and continuing the AI journey to enable earlier detections are the directions we see ourselves going in,” says Shingrani.

The concept of why we go to hospitals can also dramatically change, adds Singhal. “Today we go to a health care provider. But health care could come to your doorstep. I have all these devices monitoring me, I know when these things are going wrong, and therefore, right intervention can come to me at the right place,” he says. “Large parts of hospital time are actually spent in tests and diagnosis, while most of the treatment is done at home. For things like surgery, the place is the hospital.” But you can cut the time spent in hospitals for diagnostics, thanks to constant monitoring.

If you take a leap of imagination, even when you go to a hospital, there could be scenarios where you walk into a kiosk that will quickly measure all your parameters and analyse your health. Then, when you see the doctor, they are already looking at the reports generated by the AI tool. “There won’t be any hospital queues, because patients will be getting treated at home. I’m imagining an unmanned petrol pump, like in the US. I’m not saying doctors are not required, but there are many things that can be done without [human] intervention,” adds Manjunath of Niramai.

A healthier outlook
Of course, there are financial, regulatory and adoption hurdles to all technology. The concept of a smart kitchen keeping track of, and ordering your groceries, for example, has been around for a few decades now, and though technologically possible, hasn’t happened yet.

Constant monitoring could enable people to be more in touch with their bodies, leading to interventions or lifestyle changes at a personal level. “Before the advent of modern medicine, because we were not so disconnected from our own physiology, we were a lot more aware of what we ingested, food-wise, environment-wise, and energy-wise. Technology is going to enable that awareness,” says Shringani.

It also means higher quality care and a better quality of life for a larger number of people. “India doesn’t have a digital divide just from a financial perspective; we also have a digital divide where access to health care is concerned. In villages, one doctor serves several thousand families. In hospitals, there are long queues for every good doctor. In both cases, we need to provide tools for doctors to serve better, to scale up, be more productive and serve many more,” says Manjunath. The tools in villages could help the frontline workers to become “robo doctors, if you will.”

Health and wellness centres can be enabled through AI, adds P Anandan, CEO of Wadhwani AI. “We are talking about taking care of 900 million people using about 1 million caretakers. This 1 million comprise frontline workers, not doctors; there are about 30,000 doctors. So we need to enable the frontline workers. It’s absolutely doable.”

The strength of the AI system is to reduce the load on doctors. “AI is already augmenting the capabilities of doctors, and will continue to do so,” says Shah. It will also possibly make the doctor-patient relationship humane again. Cardiologist Eric Topol in his new book Deep Medicine: How Artificial Intelligence Can Make Healthcare Human Again writes about how the doctor-patient relationship is broken, considering doctors are too distracted and overwhelmed to connect with patients. Freeing up doctors from the mundane tasks that interfere with human connection, AI can create space for the “real healing that takes place between a doctor who can listen and a patient who needs to be heard”.

Though the opposite could also happen—giving better care will probably bring more people into the system and increase the load. “Even with AI we will probably need 10 times as many doctors as we now have; that’s not going to change. The demand is so high. In my opinion, if we end up giving better care, more people will come into the system, because they will know it’s worth going and getting treated. So, the demand will only increase,” says Anandan.